A “soap opera” of a life creates a winner. 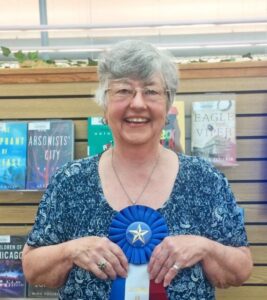 “Expect the unexpected. That’s life, and sometimes you may need a life preserver, a life jacket, a net or a raft. You can’t hold your breath forever. Breathe in, breathe out, and enjoy this wild ride.”

THE SOURCE OF WISDOM

That sounds like great advice, particularly at this time in history when the ride is often rocky. Charla’s photograph clearly reveals a lady in the wisdom zone of life, but why have I chosen to write about her? What’s that blue ribbon about?

It’s about a poem actually, a poem that immediately sent me into a moment of pause. Before I share it, however, I will add some information about Charla’s history that may affect its impact on you as well.

A TIME LONG AGO

Charla and I were high school classmates back in El Paso. I did not know her well, and our paths parted at graduation. After our 50th reunion, leadership within our ranks caused a cohort to coagulate online over the issues raised by the 2016 election and then the pandemic. With regard to Charla, she has recently begun to share creative writing that has served as a new binding agent.

This material emerged from a stressful time in her life when she sought help from a therapist. He taught her that we don’t have control over our lives, just over our actions and reactions. He wanted her to begin keeping a journal, but she began writing creatively instead, and that resulted in the poem that inspired this post. It won a blue ribbon this June, one of three in addition to a Best in Division award at the Burnet County Fair north of Marble Falls, Texas, where Charla now lives.

The theme of the fair was “Blue Jeans and Country Dreams!” As you will see, the color blue became important in Charla’s life for a number of reasons.

Charla was born in 1945, the year World War II would come to an end–not, however, before Charla’s much older brother had perished in it. Her mother’s pregnancy, well into her 40s, was envisioned as creating a replacement for the lost son. The birth of a baby girl was a bitter and enduring disappointment. Charla’s mother had planned to name the replacement son Charles and insisted that the baby be called “Charlie.” She also always dressed her little girl in blue and told her this was her favorite color–which was never to be true–and over time, the name Charlie evolved into Charla.

She had two older sisters, one 21 and the other 18 when she was born, but she was isolated by the age difference and was essentially raised as an only child. Her early years were spent in an Arizona country home where her mother was “real good at wringing chicken necks and letting them flap around on the ground until good and dead.”

An essay amplified her mother’s troubling image:  “Her skin was yellow and hung from her bones. Her hair was gray and smelled of nicotine. She chain smoked, choked, cackled and cursed. She had false teeth, wore blood red fingernail polish and ‘Evening in Paris’ perfume. She drank every day,” Charla went on, “hated herself and everybody else . . . . So I learned to become invisible. I hid in the shadows, and under the table, never directly asked for anything and stuttered when I dared to speak.”

A FANTASY EMERGING IN BLUE DENIM

Fortunately, Charla’s father, a railroad man and engineer for Southern Pacific, was kind and attentive as opposed to her scary mother. And as a child in Arizona, she was introduced to the appealing, tough but polite cowboy type, as in her babysitter Sugar Bill. It would endure in Charla’s psyche for a lifetime and inspire her award-winning poem.

Now to summarize the years after her family moved to El Paso. After graduation from high school, Charla went to college at UTEP (the University of Texas at El Paso) to prepare for a 25-year career as an elementary school teacher. She soon married and bore two sons. (Learning this made me smile because I saw it as double-compensating for emerging from her mother’s womb as a female.)

Charla had multiple marriages and was employed as a bank teller and bartender (briefly) as well as a teacher. Her last marriage came to an end in 1989, and after she retired in 1998, she began to work on turning a lifelong interest in buying “junque,” as she put it, into becoming a dealer with sales in multiple venues. In 2000, she moved to Marble Falls.

Her last divorce set Charla free to cultivate her spirited 5’1″ true self and her longtime attraction to the classic cowboy type. Her ensuing writing conveys the bold, humorous, and fun-loving personality that the cowboys enjoyed in return.

During Charla’s early years in Wilcox, Arizona, the cowboys would come off the range every year for a rodeo. She wrote that “They sat up on the wooden fences surrounding the cattle yard chewing tobacco, talking with grunts and nodding their heads and shoulders while whittling with their pocket knives. I always felt safe and protected by them boys.” After her last divorce, she was free to pursue this interest, as illustrated in the composition “Wanted: One Cowboy Type.” It begins with a conversation among friends:

“Why? What are you going to do with a cowboy?” they asked.

“Isn’t that going to be between me and the cowboy?” I answered.

Willing to spend time with a strong-minded,

To call her “Darlin'” and take her dancin’.

Before leaving El Paso to move to Marble Falls, Charla had actually begun reading ads searching for “dates” in the newspaper and decided that what all the men wanted was “a mother, maid, nurse, and cook.” So she did finally post a search for a man who must be an orphan, widowed, childless, with no responsibilities to anyone, willing to spend time and money on an “independent, self-sufficient, strong-minded woman.”

She got some replies, and when they responded laughing, she knew the men had gotten the message.

Charla did ultimately fulfill her desire for time with the classic cowboy, a number of them, in fact. Her life had long been on hold, she felt, and now she began to live the kind of experiences central to the romance novels she had loved. She had read them, she wrote, anticipating turning her own life into a paperback novel, “and I did,” she added. 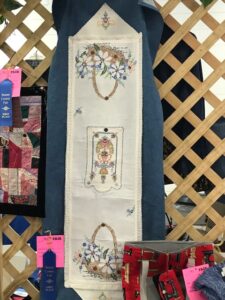 In June, Charla turned some of those life experiences into the awards at the Burnet County Fair. Three of the honors were for her writing. One blue ribbon was for a table runner with embroidery on a blue denim background, the blue theme up again.

The “runner” term reminds me of Charla’s life path–that of a “survivor” as she puts it–but also of the universal feminine currently on the move toward unprecedented freedom.

Charla’s flowered runner, which would lie lengthwise on a table, invokes the image of a tall man at rest, the last of Charla’s cowboys, for whom she still grieves. When he died, he was found lying in his boots among the cattle on his huge ranch.

Charla’s relationships with these cowboys in the second half of her life seem to have been tempered by latitude that comes with maturity. And one hears in her poem an emerging quality of parity between male and female that may prove promising for our long-term future. Just a thought. I hope some readers will share their own impressions of Charla’s award-winning poem below.

Listen to what they mean.

They are powerful words.

Much more powerful than “I love you.”

Who you are; what you stand for.

Right now—the way you are with me.

You provide a comfort level

I think I’m missing me!

5 Responses to “A Blue Ribbon Moment in History”