If it’s time to rethink our way of being on Planet Earth, how do we begin? How about with a documentary on a cowboy horse trainer? 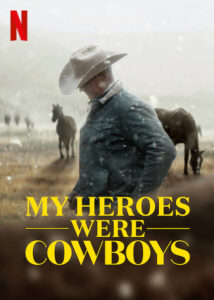 I rarely watch movies on Netflix, but several weeks ago at the end of a tiring day, I discovered the cowboy movie above. It is a rather brief documentary, and at the time, I saw no connection with my previous posts on the theme of humanity at a crossroad. But I was fascinated by the movie–the beautiful vistas of a ranch in Wyoming, the background music, the wonderful horses, and the light-filled face of horse-trainer Robin Wiltshire.

A love of horses appears in the Heath lineage, and it really flourished in my brother the veterinarian. However, I have had little personal experience with horses, and I have always assumed that horse trainers could be severe. Robin Wiltshire has clearly transcended that need while also revealing a stunning human potential that may give us all pause.

THE MAN IN THE MOVIE

The movie focuses on Robin Wiltshire in action, of course, and he speaks only briefly throughout; however, the first thing you notice is an unusual accent. He was born in Australia to parents living out in the country with many horses. However, around the age of 10, he was sent to live with his grandparents because he was a problem. He could not speak well or read at all, and he was being ostracized because he was different.

His grandfather was a horseman and a war hero, a member of the Light Horse Brigade in Australia that fought overseas in World War I. Robin says that he never saw love in the eyes of his grandfather, who once told him, “You will amount to nothing.”

However, his grandparent’s home was an ideal place to learn more about horses and riding, and one day he saw a Western movie that transformed his life. He loved the horses, the cowboys’ mannerisms, their hats and boots and scarves, and on and on. He knew early on that he would go to the United States and try to get a job in the movies.

His grandmother supported him in that respect. “Believe in what you are,” she said. “And if you want to do that through horses, then do it. Just be very gentle with them. And that will give back a lot more love to you.” 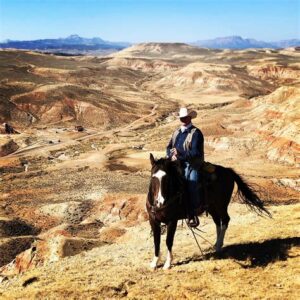 A View of Turtle Ranch

The camera work on this film is riveting. With his wife, Kate, also a trainer, and his son, Patrick, Wiltshire lives on the 3,000-acre Turtle Ranch in Wyoming. There are moments when the horses are running wild on stunning terrain. Later, there are training moments when Wiltshire mixes exquisite patience with warm praise in creating amazing performances. At the time of the movie, there were 70 or more horses on the property, most donated because their owners couldn’t handle them.

Wiltshire refers to himself as a “learner,” and he found within himself the ability to “read” the horses–perhaps because he couldn’t read in the traditional way–and cooperation and relationship emerged. I referred to a light in his face earlier, and it must reflect the love he feels constantly around his horses.

Clearly, he has fulfilled his own unique potential in extraordinary ways, and the ease with which he rides, the dignity of his walk in boots with an unusual red shaft, and the perpetual protective shadow under the rim of his pale Stetson suggest a cultivated presence that reflects pride in all he has achieved.

THE TRAIL TO SUCCESS

Unfortunately, success did not come immediately. Wiltshire arrived in the United States just as “Star Wars” launched and challenged the longstanding popularity of Westerns. However, his first achievement was the training and riding of a horse in a Marlboro commercial. Then he connected with Budweiser and for decades trained the Clydesdale horses in their commercials. He was probably behind the scene of the Budweiser commercial during the Super Bowl on Saturday. Wiltshire also fulfilled his dream of working in the movies including “Django Unchained.”

In the process of doing my research, I checked into Wiltshire’s net worth. I don’t know how reliable the sources are, but one site said $8 million and another $10 million. I chuckle at the thought of his grandfather learning this after telling him “You will amount to nothing.” There is also no reliable source for his birth date, but he must be somewhere in his 60s. 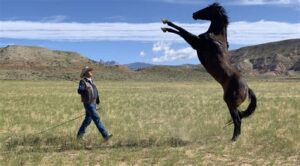 I am about to watch this documentary for the fourth time in an effort to make sure I have dialog and detail down correctly, but I think I will probably watch it yet again. It’s hard to explain, but it’s a comforting, kind of therapeutic, experience. The beautiful landscapes and the way the horses and Wiltshire relate to each other are fascinating. I think the latter reveals a human potential for an awakening of consciousness that rarely manifests. It is a nice resting point for humanity at a crossroad.

In closing, I realize that I’ve shared a lot, but there is much more for other viewers to enjoy in a unique and personal way. And by the way, I found a site, EQ Living (Equestrian Living), providing a stream of years of the Budweiser Super Bowl Clydesdale commercials with which Wiltshire was involved. The site won’t give a link to those who are not subscribers. However, you can put https://eqliving.com/cant-get-enough-of-the-budweiser-clydesdales/ in your browser to watch them. I bet you’ll get a real kick out of the experience.

6 Responses to “A Cowboy to the Rescue”