I knew it! I knew it! Blame rests with women for the discord erupting in the family of the three great monotheistic religions.

I write the above humorously, but the long view on organized religion always reminds us of ancient but enduring attitudes toward women. Sometimes it seems hard to advance when adherents are so focused on the norms of the very distant past. Never mind. As I proceed with these lectures on Islam by Professor John L. Esposito, I will try to be receptive. At the outset, however, I need to give a little background on my personal orientation.

First of all, I was not inculcated into any religion growing up, although my parents provided some of the basics on the Bible through occasional Sunday school classes. I have always been grateful for the freedom of mind that this lack of indoctrination gave me. I have explored spirituality primarily through a wide-ranging library and guided experiences in metaphysics; and I have found value, as well as shortcomings, in all of it. The research goes on, but it seems more important now because of rising religious tensions worldwide that could prove catastrophic.

So let me begin by sharing my ignorance. I did not know that Judaism, Christianity, and Islam all trace their ancestry to Abraham. I had to detour from the lectures to learn more about that history. The story began in about 1800 BC as follows: Having won God’s special favor by rejecting the polytheism of his community, Abraham was offered a covenant. If he would leave his homeland and dedicate his life and that of his followers to God, he would be given land on which to seed a great nation.

The initial problem was that Abraham, at age 86, still had no children. Elderly and barren, his wife, Sarah, urged him to beget a child with his Egyptian slave Hagar. Abraham complied and Ishmael was born. Thirteen years later and when Sarah was 90 years old, God intervened in her behalf, and she gave birth to another son, Isaac. 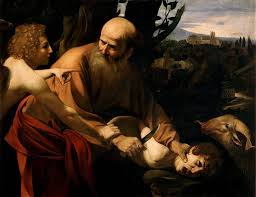 The Sacrifice of Isaac by Abraham (Caravaggio, 1602)

To make a very complex story short, Arabs are descended from Ishmael, Abraham’s son by Hagar; and Israelites are descended from Sarah’s son, Isaac. One can immediately detect the potential for trouble over the issue of legitimacy and the inevitable conflict between the two women. Let us pause and consider, if you believe the story so far, how much more peaceful the world might be today if Sarah had not tried to be helpful.

And which son did Abraham intend to sacrifice in devotion to God? The Quran says that it was his first son, Ishmael, who nobly consented to his own death before he was spared. According to the Bible and the Torah, the honor of being the proof of Abraham’s devotion to God fell to Isaac.

Ultimately the brothers went their separate geographic ways, but accounts differ. The Old Testament says that Hagar and Ishmael were banished, but the Quran relates how Abraham led them to Mecca, to the ruins of the holy house built by Adam, which he helped Ishmael rebuild. This is the Kaaba, the focus of the annual Muslim pilgrimage called the Hajj.

So there are the basics, with my apologies to those who know better detail according to a particular religious perspective. All three religions cherish the theme of Abraham’s determination to establish monotheism, the belief in one all-powerful being, as the principle valid for all of humankind.

Now back to Professor Esposito’s perspective. He explains that Islam confirms the content of the Torah and the New Testament as revelations from God, but revelations that became corrupted over time. Most specifically, Islam takes issue with Ishmael’s diminished stature and with the naming of Jesus in the New Testament as the son of God, which murks up the whole concept of monotheism.

Muslims believe that the Quran was sent through Muhammad to correct these and other errors. According to Esposito, Muslims therefore believe that “Islam is the oldest of the monotheistic faiths, because it represents both the original and the final revelation of God.”

The focus as I go forward will shift to the story of Muhammad.

One Response to “A Dysfunctional Family of Religions”