Writer’s block is a miserable experience, but a pair of doves saved me.

Earlier this year, my series of posts on memorable experiences in nature enabled me to avoid engaging with all of the rancor afoot in this historic moment. However, after publishing on March 1, I couldn’t get my bearings on how to proceed. One day after another slipped by until a pair of mourning doves came to my rescue. 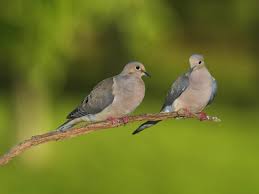 Perched on the branches of an apricot tree beyond my kitchen window, they seemed to be cooing to get my attention. Even when I can’t “write,” I journal, and I have a record of this moment. As soon as they took off, I looked up the meaning of dove in The Animal Wise Tarot, a book by naturalist and mystic Ted Andrews.

He wrote that “all ground feeding birds remind us to keep in contact with Mother Earth and the creative possibilities of life.” His introduction concluded with the idea that “When dove appears, a new cycle is being born, opening new worlds and new possibilities. . . .The dove is a bird of prophecy, and we will soon see what we can birth within our own life.”

Whoopee! But all I really needed was inspiration for my next post. That came one week later with the arrival of my STANFORD Magazine. 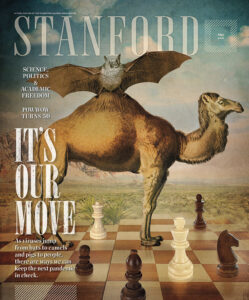 The eye-catching cover heralds an article by Denis Ellis Béchard. Titled “Of Viruses & Vectors,” its focus is the COVID-19 pandemic. The experts interviewed are scientists, physicians, professors, environmentalists and others–a total of 12 by my count–affiliated with Stanford in many different ways. The first example is epidemiologist Maria Van Kerkhove, MS’01, who serves as technical lead on the disease with the World Health Organization.

Beneath the title of the article comes a warning like a subtitle: “The next pandemic is not 100 years away,” but here we will learn how to prepare. I have since wondered if that message was added by the magazine’s editor rather than the author, because his writing takes us a quantum leap beyond the possibility of another pandemic.

Articles on such a controversial topic often suggest an author’s hidden agenda, like the pursuit of power, fame, fortune, or some other advantage. Objectivity seems an antiquated goal in this troubled era. However, within a few paragraphs, I knew I was in the unfamiliar terrain of the pursuit of truth. I was riveted. There is no way for me to do justice to the content, so I hope readers will follow the link to “Of Viruses & Vectors” and study it themselves. I’m pretty sure the world will look very different afterward.

Much of the research shared pertains to trying to determine where and how the pandemic began, how it has traveled, and how it may be contained. The magazine’s cover illustrates the “zoonotic” factor, the way disease can move from creatures to humans. In the case of COVID-19, infected bats sold for food in Chinese markets may have launched the pandemic. That makes them the “vector” in the article title. The magazine cover illustration by Catrin Welz-Stein reveals how the bat has infected camels with another coronavirus that also travels to humans.

Many other examples of vectors are provided throughout, like gerbils, rodents, rabbits, civets, ferret badgers, raccoon dogs, poultry, cattle, and pigs. Epidemiologist Van Kerkhove estimates that 70 to 80 percent of emerging and reemerging pathogens are zoonotic and expects the next big pandemic to come from the same.

We learn that there may be as many as 1.7 million viruses in mammals and birds, 800,000 of which could be transmitted to humans. With the human population increasing by about 84 million a year, our exposure to contaminated creatures will undoubtedly rise. At the same time, we will be destroying habitats, accelerating the extinction of wildlife, and sometimes crowding ourselves into very unhealthy contact. Stephen Luby, a professor of medicine and a senior fellow at the Stanford Woods Institute for the Environment sums it up: “We’re pushing beyond the carrying capacity of the planet.”

CHANGE AS THE CONSTANT

Early on, Béchard provides the context for the challenge we face. He warns that “In nature all is connected, and in ways that humans have only begun to imagine.” He visualizes “a globe as wound up as a ball of yarn but with highways and flight paths.” And we travel the latter in a time when reality seems daily to morph. It must be very hard for scientists to keep track of the ways in which climate change, population growth, the constant movement of all life, and viral mutations will figure in the development of the next pandemic. 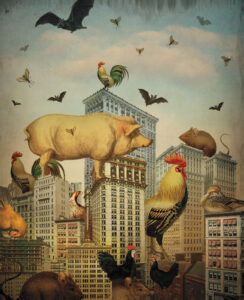 And there are so many ripple effects to consider. For example, rapid population growth can result in a huge demand for meat. To provide pasture for cattle, forests may be cleared causing virus-laden mosquitoes to descend from the canopies and go in search of humans. Huge herds of livestock contribute to the atmospheric carbon and methane that figure in global warming. With the loss of habitat, wildlife goes on the move, and rising temperatures cause changes in migratory paths all over the world. Much of that life on the move may be infected with viruses that are continually mutating not only to become more powerful but also more transmissible.

And page by page, the reader gets in touch with the fact that it is we, all of humanity–which has reshaped the earth to our needs, as Béchard puts it–that is largely responsible for the rising peril. Everywhere we look and all the news we consume reminds us of the harm we are doing. Individually, collectively, and internationally, what are we going to do about this? That question is never bluntly posed in the article, but many readers like me may go forward infected with it.

However, I also see this article as a great gift. It seeded all sorts of possibilities for my further blogging.

From the beginning, I was fascinated by “On Viruses & Vectors” due not only to the content but also the author’s skill as a writer. I’m a word person, and I could see all along the way how he kept some very deep material moving, his personal voice able to capture attention with something like a vivid metaphor. In one case, for example, he says that COVID-19 is to a much more dangerous virus abroad “what hand grenades are to heavy artillery.”

In fact, I was so struck by Béchard’s writing that I paused part way through my initial reading to do some research. “Who is this guy?” I wondered.

Biographical material is sketchy, describing Deni Béchard as American-Canadian, an award-winning novelist as well as journalist who was educated at two colleges in Vermont and a university in Ontario. Wikipedia names no permanent home and gives no place or year of birth. We do learn that, as a journalist, he has traveled in over 60 countries.

Well, something of a mystery. One thing I know for sure is that he is a superb writer who has inspired me in more ways than one. The doves were indeed prophetic.

3 Responses to “A New Beginning”