As the feminine rises in America, more and more of us are taking to “lifting.”

Kim Alderwick was way ahead of the trend above, however. Co-owner with her husband, Shane Miller, of The Miller Gym in Santa Fe, she began weightlifting in 1992. At a competition in Philadelphia at the end of last month, she set a national record in her 60-64 age group. 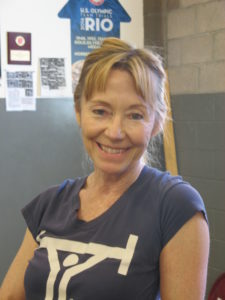 On first meeting Kim, one would wonder, “How is this possible?” A very slender 5’6″, she moves with the grace and carriage of a ballet dancer. However, it is hard to imagine a dancer who, in one smooth move, could lift 85.8 pounds (39 kg) over her head in a snatch. But what is a snatch? Maybe I should back up and review the three major kinds of competition that involve weights.

Power lifting is probably how we simplistically think of weight training–the objective being to lift the heaviest weights possible. It includes the following:

Bodybuilding is what we would like to think happens naturally as a result of weight lifting, and Arnold Schwarzenegger’s early physique comes to mind. However, the training is most specifically focused on minimizing body fat while developing specific muscles for aesthetic effect.

Weightlifting is one of the oldest events in summer Olympics. In addition to the snatch, competition involves the clean and jerk (lifting the barbell to the shoulders, then lunging and lifting it overhead).

Kim humorously describes weightlifting as the weight training for “nerds.” This is because it requires so much attention to detail, the ability to solve problems through the analysis of minutiae, and the patience to do the same thing over and over again to master technique involving speed as well as power.  As a result, weightlifting tends to attract a certain kind of mind, and The Miller Gym has an unusual number of members who work at Los Alamos National Laboratories. 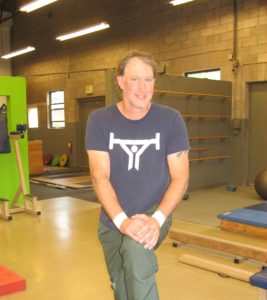 Kim and Shane established The Miller Gym in 2014. From the time he was a child, Shane had a passion for this sport and has become a brilliant trainer. Since 1993, he has coached lifters to over 700 records.  He and Kim both are very attentive trainers, meticulously monitoring a wide range of prescribed workouts in addition to weightlifting to maximize effectiveness and prevent injury.

Gym members include elementary school students to retirees. On one end of the scale, a boy and girl ages 10 and 11 have great competitive potential; on the other is a man who is a national champion and still competing at age 84.  Also in residence are Jodi Stumbo and Christine Galvin, both of whom have been inducted to the Masters Weightlifting Hall of Fame. (Masters signifies competitors over age 35.)

But now back to Kim. As I interviewed her, I had in mind the cultural shift that I think of as the feminine rising in influence and power. This is also reflected in a major increase in feminine participation in weightlifting, spurred in part by the rapid growth in the number of CrossFit gyms nationwide. As an example, this year for the first time female competitors outnumbered males in the Masters’ competition.

Kim first began to compete seriously late in her 50s. And though she had many “wins,” it was competition from another woman at the gym that caused her to train with more force and intensity than ever before. As I said, her height is 5’6″, and her usual weight is 113 pounds. A little weight enhances power, and she “bulked up” to 116 pounds for this most recent competition.

THE BENEFITS OF WEIGHTLIFTING

Weightlifting is good not only for the body, including the bones, but also for the brain; and it has become recognized as a way of mitigating depression. It is known to “strengthen the core,” which not only inspires confidence but also develops a distinctive, erect posture and ease of movement. This probably broadcasts a physical competence that sends a warning message to a predator brain, as in a mugger. 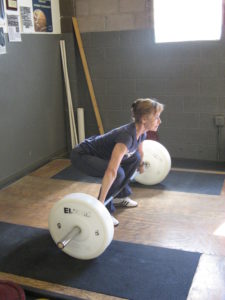 However, the primary benefit from Kim’s perspective is the opportunity that training provides for personal growth. If you’re going to advance, she says, you have to continually push through to overcome fatigue, frustration, and the experience of failure. The rewards are confidence, discipline, and a larger sense of self.

If readers would like to know more about this wonderful sport, Kim edited a book available at Amazon called The Sport of Olympic-Style Weight-Lifting: Training for the Connoisseur.

One Response to “A New Platform for Feminine Success”