St. Katherine is now the patron saint of philanthropists.

I usually really enjoy the sensitive columns of Nicholas D. Kristof, who writes for The New York Times, but the one this Sunday contained a real zinger. He wrote about a situation making the point that “women in power can be every bit as contemptible as men.” Aaaagggh! And of course he’s right. Maybe it’s time to do something about this.

Kristof was referring to actions of Sheikh Hasina, the prime minister of Bangladesh, who has in her vicious sights Muhammad Yunus, whose pioneering role in microfinance won him a Nobel Peace Prize. Sheikh Hasina has driven Yunus from his job as managing director of Grameen Bank and is trying to take control from the 5.5 million shareholders, mostly women, whom the bank helped emerge from poverty.

Although the feminine temperament can be idealized, we all know about its shadow. I have personally witnessed the feminine abuse of power in the professional world, and there have been moments when I too got off track. And the fact is that when women acquire authority outside the home we typically use it in the way modeled by men. You figure that’s the standard, and sometimes it’s ruthless. What we need in the world now is a different expression of authority and leadership.

I’ve been thinking about this for years, meaning the need for uniquely feminine and equal participation in the conversation about shaping the future. And after thousands of years of subordination and disempowerment (I have read too much history to be happy), it’s hard for all of us to step up to the plate with confidence and purpose. So I think we need to begin with a school, a place where young girls and women will study the flawed history of what currently passes for civilization and then prepare to assume new responsibility for advancing it.

I can sense a few male fingers lunging down the throat. Go ahead and barf. You need to detox.

Santa Fe author Craig Barnes, bless his chivalrous heart, has written a wonderful book called In Search of the Lost Feminine that could be a primer for the new curriculum. He wrote it to put the reader in touch with the archaeological and social forces, as he put it, that have shaped “our current culture of misogyny and glorification of war.” That will get the blood up from the first day of class. 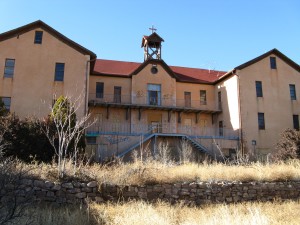 And I have thought of a place where the first school could be established–St. Catherine’s Indian School in Santa Fe. Founded by Katharine Drexel in 1886 (St. Catherine of Sienna was her patron saint), it has sat vacant since its closing in 1998. The 18-acre site is carefully protected by the Historic Districts Review Board, and every proposal for its use so far has collapsed. Perhaps the right idea hasn’t come along—until now.

The story of the school and its patron seem uncannily relevant to the issue of the appropriate use of feminine power. Katherine Drexel, heiress of a banking fortune, became a nun and dedicated much of her wealth to educating Native Americans and African Americans. She was canonized as St. Katherine in 2000. Her work was obviously well-intentioned; however, many of us now question the virtue of wresting Native American children from their homes and culture and forcing an alternate spirituality upon them.

Part of the fourfold legacy the Vatican cited in canonizing St. Katharine was the donation of her inheritance “for the victims of injustice.” Perhaps a new mission for the reconceived St. Catherine’s School would strengthen that claim. On the one hand, it would indeed serve the victims of injustice in the form of the feminine. And perhaps that good would help expiate the unwitting injustice her school committed against Native Americans.

Anyway, just an idea. St. Katherine is now the patron saint of philanthropists. Wouldn’t it be great if some of them were women who aspired to an even more enlightened legacy?

One Response to “A New St. Catherine’s School”