For peace of mind, I could stop reading the newspaper–or I could read it in a new way.

The news media have concluded that bad news sells.

I’m talking about wars, bombings, massacres, rape, fraud, natural disaster, personal tragedies, political conflict and high-profile misbehavior like biting during the World Cup. Truly shocking. To cheer up, we have to watch a YouTube video about an inter-species friendship, like the puppy playing with an Australian magpie. Thank goodness for the animals.

You can go into overload on bad news, and that happened to me a few days ago. I went completely toxic and had to pull out for a while to adjust my attitude. When I returned to the newspaper Tuesday, I committed to a new approach. I would skim the bad news to stay in touch with mayhem, but I would search for good news on which to focus. 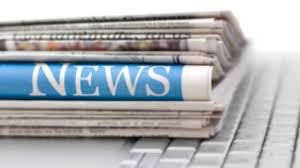 There is drama in good news, but it is much more subtle. It hits the button of  “What Could Be If Only . . .” I immediately found an example in a Tuesday editorial in The New Mexican, my local newspaper.

The writer was very impressed by a humanitarian government initiative in Peru. It has moved to install  solar panels to provide electricity for 126 impoverished communities. The goal is eventually to reach more than two million of the country’s poorest residents who have no power. Just imagine. What a shame.

Actually, however, we have such populations here. The editorial went on to say that about 14 percent of households on tribal  lands in the U.S. have no electricity. In the Navajo Nation, the figure is 40 percent. These communities need power as much as those in Peru.

In fact, the editorial went on to name government efforts here to support clean-energy projects on tribal lands. This is good news, though, so we hear little about it. What we hear about is the poverty, crime, alcoholism, and hopelessness that afflict some of these communities. The provision of desperately needed energy meets both a symbolic and literal need to overcome barriers to greater prosperity in impoverished communities everywhere.

The title of  The New Mexican editorial was “Invest in Energy Where It’s Needed Most,” and I must detour here to talk a little about money.  I am a little ambivalent about money. It evokes the dark side through greed, but it can also accomplish miracles to the good. I was reminded of this recently when someone commented that if people worldwide figured out that there is an awful lot of money to be made in mitigating climate change, we would turn this problem around in a heartbeat. That’s an exaggeration, but you get  the point.

Now to the very nature of money. A friend who is very wealthy once told me that money is energy, and people who have a lot of energy attract it. She also said that it works by moving, which doesn’t happen when people hoard or focus on investments that are “safe.” In fact, it would seem that the power of money is compounded when allied with a high but visionary degree of risk.

So we are at a juncture in history when money as energy can be invested to develop a cleaner kind of energy that will create a healthier, safer, and more prosperous world community. How appropriate.

Now on to the subject of manufacturing clean energy technology. As the effects of climate change intensify, it will be in great demand by governments for many more than humanitarian applications. Contractors all over the world will be needing it as well. The latter should already be moving swiftly to build better insulated and more self-sufficient spaces to meet the challenges of rising temperatures and freakish weather.

In the zones troubled by drought, how many depend on hydroelectric power created by rivers that are drying up? When the temperature in Phoenix rises to 130 degrees, as predicted by William deBuys, author of A Great Aridness, solar-or wind-powered air conditioning is going to feel awfully good during the inevitable, rolling blackouts.

Today in Santa Fe we have a  prediction for temperatures close to 100 degrees next week. This is in a high altitude city where, just a few years ago, homes didn’t even need to be equipped with air conditioning. Climate change is moving very, very fast here.

Let us be clear, however, that if we are going to get anywhere in preparing for climate change, the Big Dudes need to get involved. As of  Tuesday, there were also hopeful signs in the newspaper that they will.

The Bid Dudes didn’t get where they are by being dumb; and no matter how insulated by extraordinary wealth, some have an appetite for still more. Making money is something of a game, and as I said, there are indications that they will soon start moving pieces around the board to determine who will be the big winners in the new, climate-change scenario. The Big Dudes may not always be lovable, but they could turn out to be the heroes of a new era. I am rooting for them. More about that soon.

2 Responses to “A New Way to Read the Newspaper”