“As individuals, ants might be dummies, but as colonies they respond quickly and effectively to their environment. They do it with something called swarm intelligence.”

Can it be that the reign of huge hierarchies is at risk? A series of coincidences and the referral of supporting information by friends and subscribers suggests that there is, at least with regard to social problems, a growing trend toward addressing big issues “smally,” so to speak.

The first referral was to Wavell Cowan, an inventor, scientist, businessman, problem-solver, and active citizen who writes in Vermont. A friend sent me the epilogue of his new book, Escaping an Evolutionary Dead End.

Cowan boldly states that “a willingness to disbelieve” is an important scientific attribute, one that will enable us to consider that our current economic and social practices may be deeply flawed. The problem, he asserts, is that they are dominated by huge corporations and big government.

What we need to cultivate instead, he believes, is an environment in which individuals “actively explore societal problem-solving within their own communities.” This would involve the use of the scientific method to arrive at sound solutions based on observation, experiments, and the modification of hypotheses.

By coincidence, a friend subsequently sent me an article in National Geographic that suggested the term “swarming” for community efforts to solve societal problems. Titled “The Genius of Swarms,” the article by Peter Miller relates ways in which humans are learning through nature how to self-organize intelligently. 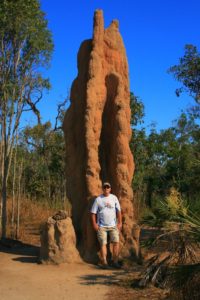 Through observing the behavior of creatures like swarms of ants and bees, schools of fish, flocks of birds, and herds of wildlife, computer scientists have developed software to route trucks, schedule airlines, and create teams of robots for the military. Their inspiration has come in part from an emerging lesson in the discovery of countless biologists : Although no single ant, bee, fish, or caribou is a genius, in close communication with all the members of their group, they can function brilliantly as a single organism.

The key to their success, says Miller, “is that no one’s in charge. No generals command ant warriors. No managers boss ant workers. The queen plays no role except to lay eggs.” Even with half a million members, a colony seems to function well with no management at all “just countless interactions between individual ants.”

It seems that technology has enabled humans to interact with each other virtually constantly like swarms, flocks, schools, and herds. However, sitting at a computer and rolling through emails is not the same as connecting through the touching, scenting, hearing, and watching that informs other creatures acting as with one mind. So how can we form “swarms” to address not only community problems but national ones? Now Mark Zuckerberg of Facebook enters the picture.

The Role of Technology

Zuckerberg has recently updated the mission of Facebook: “Give the people the power to build community and bring the world closer together.”

Fully aware of the ways in which Facebook has been used to harass and recruit terrorists, he is guiding the development of features that will encourage members to join “meaningful” groups–worldwide. The initial goal is to have one billion people in that category of engagement.

Thanks to yet another friend, I have an example of how that could work. I was referred to an article published by the independent news organization Truthout on how the Denver Public Library has mobilized to support the city’s huge homeless population. This resulted from the fact that individuals forced from encampments gravitated to the library.

The library staff mobilized to help. They have now recruited two drop-in social workers who locate support services and hand out bus passes, socks, snacks, and water. They also provide a bi-monthly laundry truck to help with hygiene. And finally, the library hosts a bi-monthly opportunity to engage with staff through a Coffee Connections program offering snacks, crafts, and games as well as coffee.

This is the kind of activity whose participants could organize as one of Zuckerberg’s “meaningful” community groups. The Denver group could ply the waters nationally to connect with library groups all over the country to share their experiences and ideas. The number of homeless in the United States any given night is estimated at well over 600,000. So far, there has been no “big” solution to the problem; and perhaps community effort, as in Denver, can more successfully mitigate it.

So there we are, just a few examples of ways to address huge problems in community ways. This takes me back to my earlier post on how two women, Alice Corbin Henderson and Mabel Dodge Luhan, led a kind of cultural revolution in New Mexico.

They knew many distinguished artists and writers and thinkers, and they invited them to become guests in their homes. Word traveled about New Mexico, visits to Santa Fe and Taos from all over the country multiplied, and change began. This household dynamic is in contrast to the way in which technology so effectively connects us but ironically often at the cost of real intimacy.

The way successfully to foment community response to social problems like homelessness, poverty, obesity, illiteracy, and the opioid epidemic, for example, may require that we begin the old-fashioned way–as in meetings in kitchens, offices, coffee shops, school rooms, etc. And then once a specific, local approach to a problem has been proven to work, it could be disseminated through a “swarm” of Zuckerberg’s meaningful online community groups.

Just a thought. If certain species of ants can create architectural pillars through swarming, then . . . .

One Response to “A Revolution of Swarms”