Did you know that spiders have a heart? And is the Joro on a mission?

THE TIME HAS COME 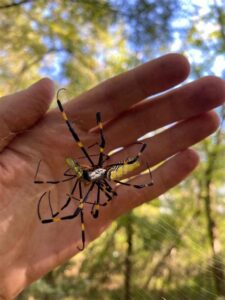 This species immigrated to the United States around 2013, and its “immense” size threw into a panic many people in Georgia where it first appeared. More importantly, perhaps, it has inspired spiritual and philosophical as well as scientific interest in the meaning of its sudden arrival. As I began to research this species, the Trichonephila clavata, details kept coming up that gave me pause: “Time for us all to think,” seemed the message.

First of all, though, I will clarify that the Joro spider did not come here on purpose. It is indigenous to Asia–Japan, Korea, China, and Taiwan. The first was sighted in the little town of Hoschton, northeast of Atlanta and south of Interstate Highway 85. There are many warehouses along the road, and it is assumed that the Joro spider escaped from some kind of shipping container.

The ”immense” size of the female with leg spans of 3-4 inches and her brilliant red, yellow, and blue abdomen markings immediately caught attention and raised concern. Fortunately, they are not poisonous and have a tiny bite.

With regard to that opening question about the heart, they do have one that beats at a very rapid rate, enabling the Joro to survive a brief freeze that would kill other species of spiders. They’ve already moved into Tennessee, North Carolina, and South Carolina and are expected to move up the East Coast and on into Canada. 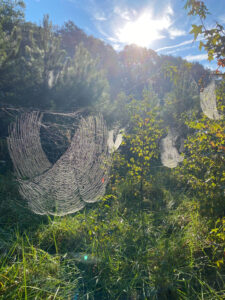 This is not because they are seeking more shipping containers. Their unusual way of traveling long distances is called “ballooning.” They construct a very unusual web–multidimensional, in fact. It has a central orb and two layers both front and back. A breeze can pick up the web, forming a balloon that transports the spider to new territory.

It is most likely that the Joro came here from Japan, and its name derived from this mythical being called Jorogumo. It can shapeshift from giant spider to a human woman to half woman/half spider. In her beautiful human role, she can trap and eat young men. 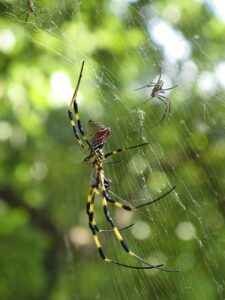 In the photo at left, you can see why the tiny little brown male Joro may have inspired stories about a dangerous female.

Its very unusual web also attracts attention because it can be a nuisance. One entomologist found webs ten feet deep stretching across his porch. However, unlike any other spider, Joros are known to eat stink bugs that can wipe out entire crops of things like peppers, tomatoes, and corn.

They may ultimately be seen as making a valuable contribution to insect diversity in the United States, and the loss of species diversity worldwide is becoming a matter of acute interest. The attention the Joro spider’s web has attracted obviously evokes the term the Web of Life and the way all species are connected. Perhaps the Joro spider has a purpose after all.

It could be said that the Joro spider’s arrival in the United States as a new insect instantly endowed it with special status. After all, we are a nation that has played a major role in the unprecedented rate of extinction among all species. This is due to our destruction of habitat, over-hunting, over-fishing, polluting, and our role in global warming.

Of course extinction is a natural phenomenon. In her 2018 “Update on the World’s Diminishing Resources,” physicist Gioietta Kuo wrote that there has been a “background” extinction rate of about one to five species per year. Now it has leapt to tens of species every day. In fact, she said that 30 to 50 percent of an estimated 1.75 million species could be heading toward extinction by 2050.

Kuo quoted biologist and Stanford professor Paul Ehrlich in holding rich western countries primarily responsible for “siphoning up the planet’s resources and destroying its ecosystems at an unprecedented rate.” On many fronts, the year 2050 is being identified as the point at which the Earth can no longer sustain a human population that will could reach about 10 billion by then.

Even though we are being progressively revealed as responsible for an emerging planetary crisis, humans consider our own species infinitely more important than any other. In fact, we have long embraced through religion the idea that we were given dominion over all the earth, but that is beginning to seem unwise, if true. What are some of the contrary perspectives?

A spiritual perspective appears in an article by Sufi teacher and author Llewellyn Vaughan-Lee titled “Loneliness and the Sacred Web of Life.” He begins as follows: “The unspoken poverty in our culture is a poverty of spirit, a real hunger for what the West has forgotten: that not just individual life but all of creation is sacred.”

He sees loneliness emerging not only as the result of the ways in which technology distances us from each other and the natural world but also as a result of the way the reign of “consumerism” fails to serve the soul’s search for meaning. “We are not on Earth to be alone,” he says, “but to be a part of a living community, a web of life in which all is sacred.”

That point of view has the potential to transcend religion, politics, and patriotism in the process of creating a planetary sense of community that could result in an evolutionary leap.

Technically speaking, we could be looking at human extinction, but leaders in other fields besides science are trying to awaken us by using a higher road than inspiring fear, and this goes back to the meaning of the Web of Life.  We are being encouraged to see how all life on Earth is interconnected and mutually dependent, and this does not align with the idea of human dominance. It also doesn’t encourage us to be guided and thus limited by the patterns of history. In other words, it may be time to begin thinking way, way out of humanity’s historic box.

What could that mean? The magnitude of the challenge seems overwhelmingly huge. However, as I researched the theme of the Web of Life, I encountered one perspective that defined the challenge before us very simply. 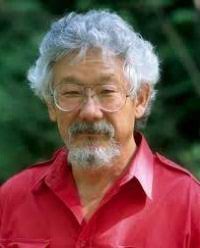 The source of this idea is David Suzuki, a Canadian geneticist and environmental activist who has hosted a program called “The Nature of Things,” since he founded it in 1960. It has been one of the most successful television programs in Canadian history.

He believes that the Web of Life must become the foundation of the way we live as we pursue three very simple goals.   We must work from:

This summary appeared in a 2016 blog on Earth’s Web of Life by marine biologist Bill Graham. Although the goals sound very simple, the detail is enormously complex. Nevertheless, it’s a beginning that could change the world–for the better, it will seem to many of us.

Who would have imagined that a Joro spider could have brought so much new attention to a time of crisis? It has added a new dimension to decades of futile warnings from scientists about pending extinctions throughout the Web of Life.

In the moment, we are all preoccupied by conflict in Ukraine that could lead to yet another cycle of war that we seem likely endlessly to repeat, accelerating the speed of extinctions. However, the ability to pause and experience wonder and respect for the Joro spider, like so much else in the natural world we take for granted, could be especially wonderful. After all, it might reveal the potential for an awakening that could transform all life on Planet Earth. No small thing for a female arachnid.

One Response to “A Spider to Our Rescue?”