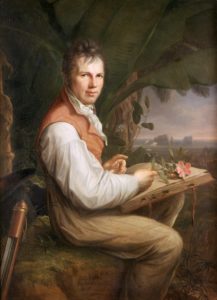 I am happy to say that I spent Thanksgiving with “the greatest man since the Deluge.”

I’m referring to Alexander Von Humboldt, whom I mentioned in an earlier post. I wrote that Humboldt, a Prussian explorer, geographer, and naturalist had originated the idea of “the great web of life” and foreseen human-caused climate change. He died in Berlin in 1859 at age 89, less than a month after sending his publisher the last volume of his monumental work, Cosmos.

At the time of my post, I had just begun reading Humboldt’s biography, The Invention of Nature by Andrea Wulf. Impatient with my slow progress on this important book, nature grounded me with a snowstorm on Thanksgiving Day, and I devoted the entire day to finishing my reading. What a great but also disorienting experience.

As I read, I began to realize that my education had been flawed in a tragic way–but not just mine, that of everyone in America who hadn’t had the opportunity growing up to learn something about this man’s studies. Fortunately, several friends, including one in Berlin, reported that they did know about him.

And thank goodness for Wulf. It would take a lifetime to study all of Humboldt’s discoveries, but Wulf’s summary is brilliant. It is a masterpiece of research and writing that brings Humboldt and his adventures to life. She is rather private about her background, but I think she is German, born in New Delhi, India, but raised in Hamburg, Germany. 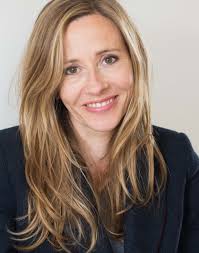 Wulf  writes that when Humboldt died, he was so renowned among scientists, scholars, thinkers, artists, and heads of state worldwide that his knowledge and influence were looked back on as the “age of Humboldt.” (The quote with which I began this post was by Prussian King Friedrich Wilhelm IV.) Even American newspapers referred to him as “the most remarkable man ever born.”

As I read, I kept wondering, “Why haven’t I ever heard about him before?” I felt gypped. His work should have shown up somewhere in my liberal arts curriculum because in addition to scientific data, he had included art, history, poetry, and politics in his books. He is well known all over Europe and in South America, but here Humboldt had pretty much disappeared.

Wulf explains in her epilogue: An anti-German sentiment came in with World War I, and it endured for many years. German publications were burned here, books were removed from libraries, and German-American citizens were sometimes attacked. In England, the royal family changed their last name from “Saxe-Coburg and Gotha” to “Windsor,” and the works of Bach and Beethoven were not being performed.

Well, there you go. The gifts of Humboldt’s genius were interred here in America, a tragic loss from a war we won.

I hope what I’ve written inspires many readers to explore Humboldt’s biography. I can’t do justice to its content beyond saying that it may well be transformative. However, I personally benefited in an additional way. From my perspective, Wulf’s book kind of redeemed the masculine in the moment.

Dangerous males all over the world are in the media’s spotlight right now, and I don’t think I need to go into all the ways that the term “dangerous” applies. The story of Alexander Von Humboldt is that of a man who was the polar opposite. I was fascinated by the history of the intellect, physical courage, and stamina he dedicated to his lifelong effort to learn as much as he could about Earth and share it in order to save it.

And that wasn’t all. Wulf points out that he inspired five other men who did similar service: Charles Darwin, Henry David Thoreau, George Perkins Marsh, Ernst Haeckel, and John Muir. Darwin of England developed the theory of evolution, Thoreau created a renowned work of American nature writing in Walden, and Marsh with Man and Nature stimulated preservation and conservation movements not only in America but also internationally. Haeckel, a German zoologist and artist, wrote a book titled The Riddle of the Universe that advanced the idea of the unity of God and nature; and John Muir championed putting the American wilderness under Federal protection. 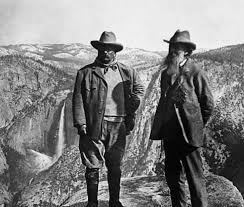 As I read about all these extraordinary men, I noticed that none of them cared a fig about money; they just needed enough to get their work done. They risked their lives in some cases, and all of them were passionately dedicated basically to preserving the beauty, wonder and viability of all life on Earth–our “home.” They were very aware of the lust for power and wealth they were up against. As Muir said, “Nothing dollarable is safe, however guarded.”

These men were true heroes. It is so comforting in this perilous moment to be reminded of their selfless dedication to saving this beautiful world from our own destructiveness. We desperately need more of their kind–men to love and revere rather than fear and regret in positions of power.

Begone, ye Provocateurs! Time for your nemeses to rise–or your Higher Selves to manifest. If not, our shame will endure “Evermore,” quoth the Raven.

6 Responses to “A Thanksgiving Blessing”