I know.  Men probably read signs in the woods too. 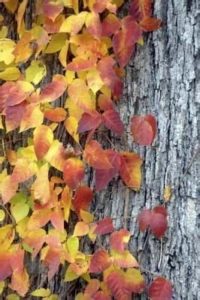 The reminder came just hours after posting my last blog about the nature of partnership. It came in the vision of a man jogging up a woodland trail.

Tall and slightly gray-haired, he is clearly in great physical condition, the maintenance of which helps him deal with challenges at work and home.

Something catches his eye in the underbrush to the right, and he stumbles and falls on the dirt path. Recovering quickly, he leans over to brush his knees, and a towering tree seems to rise before him in greeting.

It has a thick, rugged trunk where poison ivy has climbed to an extraordinary height. However, its rusty, decorative leaves signal a retreat from incoming winter.

The man smiles wryly. “Hi, Honey,” he says softly. And then he continues on up the trail.

I expect that the male and female interpretations of this scene would differ significantly. (Please feel free to share with a comment at the end.) And our different perspectives by sex are looming as hugely important as we go forward, so I will detour into history for a moment.

THE ORIGIN OF A SCRIPT

We are in a time when a challenge to the command “Follow the script” seems to be rising. That applies first and foremost to the roles that have been imposed on both male and female in what currently passes for civilization.

For men, I think the traditional role of provider has always come first and is the most taxing. For the female, it would be the role of bearing and nurturing children. Of course these assignments have been tempered in countless ways by education, opportunity, and especially more doors opening for the feminine. However, with time to think imposed by pandemic isolation, we could be standing on the threshold of a major worldwide edit in the historic script.

THE EVOLUTION OF PARTNERSHIP

The traditional roles of the sexes were based on practicality. Humans mated, babies came, and both parents had to provide for their survival. Then we learned that communities also enhanced the potential for survival. By expanding communities through partnering for power and economic benefit, the potential of survival was further enhanced. 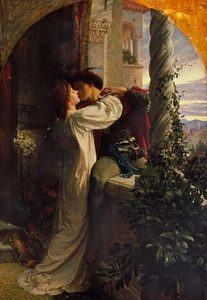 Romeo and Juliet by Frank Dicksee

Modern romantic love is said to evolve from the discovery of shared interests and complementary virtues. This can lead to a partnership so strong that each feels “made whole” by it. To be practical, however, beauty, health, and wealth also attract. Unfortunately, the decline of the first two over time may serve to dampen romance.

Romantic love could result in moments of ecstatic intimacy and pregnancy, but not necessarily in marriage. In fact, I discovered that the idea of “happily ever after” did not take root until about the mid-1800s. It may have reached its pinnacle of popularity here when the end of World War II inspired a joyful surge in marriage and birthing that created the generation of Baby Boomers.

MARRIAGE ON THE WANE

There have always been tensions within marriages because of the assigned roles. As I went over the history, I imagined how more space between partners and mutual support for fulfilling individual potential could enhance and sustain relationships. I could even imagine this leading to an evolutionary leap. However, I soon discovered that statistics don’t indicate that this is afoot, and especially not during this time of a pandemic.

It’s hard to get up-to-date figures on marriage and divorce because things are changing so rapidly. However, back in 2014, the Pew Research Center reported that the percentage of unmarried adults had reached a record high of 20%. And according to Legal Templates, a company that provides legal documents, the divorce rate is also rising–by 34% since 2019. And 20% of the couples seeking divorce had been married within the last five months.

One may assume that these statistics will continue to reveal the downside of too much togetherness during the pandemic. And a coincidence served further to challenge my fantasy about the evolution of marriage. This occurred over lunch with a friend.

She shared that a young relative had told her that she is “nonbinary” sexually. I immediately got the drift, but I looked up the term as soon as I got home, and a whole new world was revealed. Nonbinary means that a person does not identify at all with either the male or female gender. On a site called Healthline, I was stunned to discover a total of 46 different types of sexuality. I couldn’t find the term “normal,” just “straight.” I feel anxious. The word straight sounds like mimicry. Is normal gone?

And then there are people out there who define themselves as “fluid.” These are individuals “who experience shifts in their sexuality, sexual attraction, or sexual behavior in different situations or throughout the course of their lifetime.” If you become aware of fluidity in a friend, male or female, it could be a little nerve-racking. It’s like you’d feel the need to inquire, “Uh, and how are you feeling sexually today?”

It sounds like the idea that “the opposite attracts” is moving toward extinction. In the distant future, humans might be capable of engaging sexually with any other human, all randomly sharing the same accoutrements–beards, breasts, testicles, etc., on a rather nondescript but standing body. But perhaps this would serve to protect what remains of our species from extinction. It would certainly dampen procreation.

Perhaps this evolving capacity began when a critical mass worldwide registered that there are already too many of us on the planet (currently about 7.8 billion). If so, we clearly cannot continue to grow at the current rate of 83 million a year. Short of what seems to be a pending era of homogeneous sexuality, how could procreation be dampened?

First of all, the traditional obligation of the young to get married and start a family would wane worldwide. This might result in greater feminine freedom to cultivate aptitudes beyond parenting that would benefit community. They might even institute a form of breeding more focused on enhancing “the line” as in show horses.

You’re right. I’m losing it. Time to wrap up.

SO HOW DO WE GET OUT OF THE WOODS?

The speed of change right now reminds me of underbrush rising up to choke the woods even as one walks a trail. It would be a good reason to have a man lead the way to clear as you go. Opposites do attract for good reason, in this case making the female willing to follow. 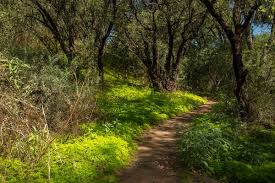 Now, of course the man would move faster alone, but he might enjoy the thought that his tight bottom is being watched from the rear. And he might anticipate a reward for his effort that–intentionally or not–would lead to a new life coming in.

It’s just really hard to figure all this out, but I’m glad I was young in the era when the survival of the species did not seem to be at risk. And maybe if all the sexes can work together to ensure that all the woods and the wildlife within remain healthy and so do we, the remaining “opposites” will ensure a future through sufficient breeding. I am at peace.

One Response to “A Way Out of the Woods”