The Swiss pharmaceutical company, Roche, announced June 27 that they will cease to manufacture Valium. Are they crazy?

Why would Roche dump Valium, right when the world needs it most? Oh. They’ve lost their patent and Valium has gone generic. No, I do not know the names of generic brands. You’ll have to ask your doctor, but I’m writing this blog to spare you the need for a prescription.

And we’re all going to need palliatives. The media, always in search of drama, will ensure that anxiety will continue to rise worldwide. For example, let’s consider the journalistic response to the recent joint appearance of Hillary Clinton and Elizabeth Warren. One writer described the combination as “electric.” What? Is he hinting that Clinton could choose Warren as a running mate? Oh, Lordy: Women in the office of both president and vice president? We’ve never done this before. I mean, we’ve had the same sex in both offices, but they were men.

“It’ll never happen,” has been the response among several friends. A bridge too far. We don’t even know if electing a female president will set a bearable precedent.

But anything could happen, right? Brexit was a big surprise, wasn’t it? And how about Donald Trump before that?  Who’s to say that Hillary Clinton will be confined by convention when no one else is? In The New York Times, Columnist Roger Cohen has referred to Brexit as a country’s willingness to “trash the status quo for the high-risk unknown.” Are only the Brits so bold? Doubt it. We’re certainly heading that way, candidates and voters alike. 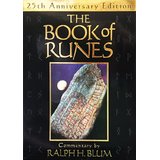 The title of Cohen’s commentary was “Britain’s Leap in the Dark.” This reminded me of what is referred to as “the empty-handed leap into the void” in The Book of Runes. “What are the Runes?” you may ask. And my response is, “The Runes are an ancient Oracle, and you should get a set as soon as possible. You’re going to need it.” (If I’m going to help you, I must be blunt.)

Really, I’m serious. But first a little background. An Oracle doesn’t tell fortunes or the future but provides clues that enable the individual to access the knowledge of the subconscious. The symbols carved and painted on stones and pieces of wood first appeared about 1300 B.C. in Europe. They were cast and “read” by Rune masters, the last of whom died in Iceland about 400 years ago. That’s why they’re referred to as the Viking Runes.

If not for Ralph Blum, an American who discovered the Runes on a visit to England, much of their history and value would have been lost. He published the first edition of The Book of Runes in 1982, and since that time, millions of people have learned how to work with them. I became one of them, the Runes having been a gift from sister Kate about 30 years ago. That’s one of the reasons why I am so grounded, as you may have noticed. No? Well, read on anyway.

To summarize, the value of the Runes is that they help the individual Rune caster grow in wisdom. Each ceramic disk is imprinted with a glyph or symbol whose meaning is explained in Blum’s book. Typically either one or a set of three glyphs is drawn from the little felt bag to address an issue. In my case, I always played with the Runes without seeing, finally settling on the one that “felt” right in the moment. Without fail, it seemed that something in the narrative would resonate and bring light to a situation. 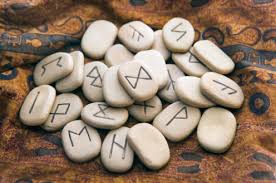 And to give an example of their value, I pulled a Rune to address the issue of this troubled time for readers before I started this blog. I drew the reverse of a glyph called Fehu. In part, the text went like this: “Reversed, this Rune indicates that doubtful situations are abundant and come in many forms and guises. Here you are being put in touch with the shadow side of possessions. Yet all this is part of coming to be and passing away, and not that which abides. In dealing with the shadow side of Fehu, you have an opportunity to recognize where your true nourishment lies.”

Over time, the Rune practitioner integrates the concepts in the glyphs and needs them less and less. For example, even before reading Cohen’s commentary, I had been thinking that Brexit was yet another case of “the empty-handed leap into the void,” which is represented by Odin, the Blank Rune. I am very familiar with this concept because I’ve done so much of it myself. Sister Kate even had a silver necklace made for me with a pendant shaped like Odin.

The empty-handed leap into the void is an act of courage and a direct test of faith in some idea. It requires willingness and permitting, because you cannot exercise control over the outcome. The only thing that you can trust is that you will be changed by the experience. That leap is what the Brexit folks have done, that’s what Trump has done, and that’s what Hillary would be doing if she chooses Warren as a running mate.

I won’t go into my own leaps, but I am very familiar with that exciting sensation of launch–the boldness, the excitement, the thrill of being airborne, eyes fixed on the goal in the distance. The problem, of course, is gravity. And if the landing doesn’t kill you, so to speak, it may ultimately endow you with this quality called “gravitas,” which I associate with dignity and wisdom. And then there is always the possibility of landing safely near the goal. That’s why we keep doing it.

Of course most of us are living regular, maybe not terribly exciting, lives. However, the battles of the big ships at sea are going to send huge waves crashing on our individual shores. The Runes may help some of us cope. Once used by warriors bent on conquest, they now serve the “Spiritual Warrior,” as Blum puts it, “the one whose quest is doing battle with the self, the one whose goal is self-change.”

And we’re all going to have to change in certain ways to meet the challenges of these troubled times. My Runes stand at the ready. They were certainly a great gift to me, and I’m paying that forward with this post.

One Response to “Abandoned by Roche, We Turn to the Runes”