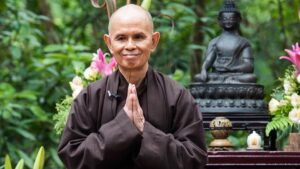 We are a living, breathing manifestation of this beautiful and generous planet. Knowing this, we can begin to transform our relationship to the Earth.

Aware of the turn my writing is taken, a friend sent me some thoughts by the Buddhist monk and teacher Thich Nhat Hanh shortly before he died on Sunday, January 22. My new writing goal is to share perspectives that will promote unity among Earthlings rather than multiply and deepen all the ways in which we have fractured as a species. My friend’s referral was very timely in that regard.

My previous post concluded with the idea that it is time (1) to rethink our way of being here and (2) to begin cultivating an earth consciousness that could result in an evolutionary leap. The gifted material by Thich Nhat Hanh makes a number of relevant points.

For example, he says that “We see ourselves as the center of the universe and are concerned primarily with our own personal survival.” However, he points out that “Everything outside us and everything inside us comes from the Earth. We are a living, breathing manifestation of this beautiful and generous planet.”

Realizing this, he says, will cause us to fall in love with her. And further, this is the relationship each of us must have with the Earth if the Earth is to survive, and if we are to survive as well.”

That is the kind of idea that comes to one during meditation in something like a cave sanctuary. Here in America, we are instead fused with screens and preoccupied with personal concerns that seem so much more important in the moment. But is it time to try to begin thinking way, way, beyond current issues and classic spiritual counsel to explore a fanciful vision that might prove a little helpful?

A MEETING OF DIFFERENT RESPONSIBILITIES

Imagine a thoughtful presence sitting on a stone throne at the top of a huge mountain. Mother Earth is contemplating a severe descent below softened by an unprecedented depth of snow. She had created a blizzard as yet another warning that has not registered. Tired of being ignored, she is considering launching an epic, thundering avalanche to add to all her preceding alerts. A faint smile ripples, inspired by the irony of a radiant white messenger of death.

Suddenly her face smooths as she detects the vibration of a presence a little bit higher and to her right. It is the Heavenly Father, and he has come to intervene. She turns to inquire:

ME:    So prayers have been pouring in?

HF:    Yes. Avalanche scientists have warned that the catastrophe you’re contemplating will be the worst in recorded history. There is no way to temper the damage by setting off smaller events on down the mountain.

ME:   It may not be me who sets it off, you know. Just guys having some fun.

ME:   You know how beautiful Earth was in the beginning. Look at it now. Getting worse every day. No way to slow the decline. Are the spirits below asking you for help?

HF:    Yep, but not about how to take care of the wonders you bestowed on them. The prayers are endless, all beginning with “Please.” “Please help me get a promotion. Don’t let my kitty die. Stop my husband from screwing around. Help my team win. Don’t let my stock in the fossil fuel industry go worthless.

(The presence sighs.) No one ever says thank you. They all want money, power, to win at something or other. To be safe from all the problems they’ve created.

HF:    All the domesticated creatures. They don’t know how to take care of themselves. Wouldn’t that make you sad?

HF:    Were you very sad about the dinosaurs?

ME:    Well, they were a beginner species, kind of homely, you know. And what could I do?  There was no way to stop that asteroid. And things did clean up after a few million years. Things will again. Do you think there could be an awakening before Earth is totally trashed?

HF:     So you’re considering backing off?

ME:    Have they been asking you to to calm me down? Are they going to create trouble between you and me now?

HF:    Well, what I really want to happen is for your daughters down there to turn their role of nurturing and comforting more toward nature. You know. Begin to create an Earth consciousness. Begin to baby Earth. Make the men earn their babies, so to speak. Sort of like, “You no fixie things? No more babies.”

ME:   What about the money problem?

HF:    Well, that’s an idea the men made up. And you know wildlife don’t eat money. You can’t bury it in the soil to make things grow. And it doesn’t grow on trees, as they say. It’s used primarily to create waste, to foment war, to create power that is then abused. Humanity needs to discover a new mission.

HF:    Well, your little virus buddies are being very successful in keeping them cooped up. Time to think, you know.

HF:     And the ones who don’t cooperate can come be with me sooner rather than later.

ME:    I’ll think about that–especially in places where people are waking up to how much I have given them and are beginning to try to restore it.

HF:    How about taking a break? Sort of like a mother below deciding to have a cup of tea then take a nap?

ME:   Well, my earlier interventions–you know, wildfires, floods, tornadoes, droughts, and so forth–may have been more like a disciplinary whack of a ruler on the head than a real confrontation. And maybe the danger of the situation is registering. I’m watching for signs.

ME:   Like if you tell me you’re getting many prayers asking for guidance on how to restore the planet, that would be a bit reassuring. I may continue to send warnings, just not launch a worldwide cataclysm. If you can tell that Earthlings are getting ready to talk turkey, as they say, and meaning the men too, and if you tell me where this is happening, I’ll back off there. That will make you look good, and the word will spread. I’ll send you some fresh air as a thank you. 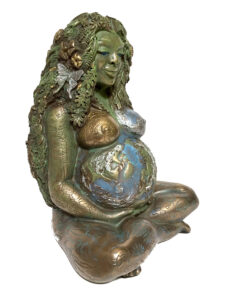 So there we are.  A vision of Mother Earth very different from that of Thich Nhat Hanh. Our imagination is going to be extremely important in healing the Earth, and a vision of a loving Mother Earth would be very helpful. The voice in the script above seems to be that of a mother who has aged bitterly due to the damage we have done to our beautiful home.

I rambled around online to find an image of Mother Earth to include here. I didn’t see anything that approached inspiring the love Thich Nhat Hanh imagined but decided to include the one at left. You may want to explore the wide range of art work here.

Maybe we’re too out of touch with the body of Mother Earth to express love for it through art. More on that later.

4 Responses to “An Idea That May Save us”