If you were open and desirous, and if spiritual guidance stood at the ready, how could you be reached?

As I mentioned in the closing of my last post, I had what I would call a spiritual awakening almost 20 years ago. As in the case of Carl Jung’s patient, it was initiated by a synchronicity, but mine descended on white wings instead of those of a scarab. The story follows in memoir form.

When I look back on an extraordinary series of coincidences, I wonder when the possibility of an awakening actually launched. Was it due to the major move and change in lifestyle? Was it a readiness for something new to enrich my life way? Was it the teaching emerging from a painting journal? Or was the stage finally set with the naming of a puppy?

I will begin with the painting journal. In the summer of 1996, I had my art materials in hand as I descended a bluff, heading for the beach at Lake Michigan during a family reunion. I am a writer, not an artist; but I had been feeling a little adrift after the recent move from Houston to Nashville, and a psychic friend had recommended that I take up art to jump-start my creativity. I initially dismissed the idea, but a few days later someone handed me a brochure on a class about keeping a painting journal. Taking that as a cue, I signed up.

Over the ensuing weeks, I discovered that images in nature were my preferred subjects, and day by day a sense of visual adventure began to develop. To paint something, you have to look at it very closely. When you look, you begin to see. And then it seems that things begin to appear for you to see. So as I headed down to the beach that morning long ago, I wondered what would show up as the day’s subject.

Minutes earlier, while chatting with my sister-in-law at the breakfast table near a window, the flight of something white overhead, presumably gulls, had caught my eye. My former husband and I and three stepchildren had arrived the day before to the stench of carcasses from the die-off of a herring called the alewife, and we had worked along with the gulls to clean up the beach. If they had returned, perhaps I could get close enough to paint one.

When I reached the beach, however, a different opportunity greeted. As though having assembled for their portrait, a flock of swans floated on a lake gone as smooth as glass. Delighted, I immediately set to work with my water colors. The sight before me was so unusual that I titled it “The Omen.” When we returned to Nashville, I would look up the meaning of swans. 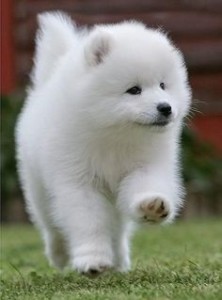 Our Norman Rockwell-like holiday came to an end a few days later. My three young stepchildren were always sad at the parting with cousins, but this year we had something else to look forward to. My middle stepdaughter had always wanted a dog but couldn’t have one in her mother’s home; so with our change in lifestyle, my husband and I had committed to getting a pet to enrich their visits. Knowing that I would be the primary caretaker and having owned several Samoyeds, I discreetly guided the discussion in that direction. Soon I found a new litter in Georgia. By the time we returned to Nashville, the puppy my husband and I had chosen, a little male resembling a white baby bear, would be old enough to join us.

We had given the children the privilege of naming him before setting off for the holiday in Michigan. They had been studying mythology, and my stepson suggested that we call him Apollo. Everyone immediately embraced the idea, and a quick check revealed that Apollo was the god of music, poetry, prophecy, and the healing arts, all of which struck a special chord with me.

Our flight back to Nashville was troubled by bad weather, and we drove up to our hilltop home that night amid thunder, lightning, and heavy rain. As everyone unpacked and headed tiredly to bed, I detoured to my office downstairs to look up indigenous teachings on the power of swan.  In Medicine Cards by Jamie Sams and David Carson, I learned that the appearance of swan heralds incoming experience with altered states of awareness and the development of intuitive abilities. Great. I was ready.

While the children still slept the next morning, I called the breeder in Georgia to make arrangements to pick up Apollo the next day. I was excited and eager; her voice was tired and dejected. She sadly informed me that, while we were gone, the entire litter had been wiped out by Parvovirus. Devastated, I hung up the phone and struggled to comprehend.

My mind flew back to the evening when I had first seen Apollo. He and the two other males that had not yet been spoken for were gamboling on a green, moonlit lawn. As we watched them play, they quickly acquired nicknames. There was Flop Ear, who had one down still; Mr. Personality, who came when we called; and Macho Pup, who continually chased and mounted his brothers in a show of dominance. Then the moment came when they paused to rest, and Macho Pup, who had ignored us up until then, turned and looked me right in the eye. It was as though I recognized him, loved him already. He would become our Apollo.

Now I was disoriented by the news of his death. How could he be gone after that moment of bonding? How could it be that I would never know him? How had the prospect of wonderful family times with him suddenly vanished? And how were we going to explain this to the children, especially the stepdaughter who had so wanted a dog?

I called my husband at work, and he asked me to wait until the evening when we could break the news together. I managed to get through the day, trying to behave as though everything were fine, my eyes repeatedly welling with tears. That evening my stepdaughter greeted her father at the door with an excited hug: “This is the happiest day of my life. We’re going to go get Apollo tomorrow.”

We sat down rather formally, and my husband explained what had happened. The children were stricken, of course, but the loss was softened by the fact that they had never seen even a photo of Apollo and by the promise that we would get another puppy as quickly as possible. We shared a comfort food dinner of steak and strawberry shortcake; and when everyone dispersed afterward, I went back down to my office to do more research. There had to be more to this than I yet understood.

This time, I turned to Hans Biederman’s Dictionary of Symbolism. There I learned that a swan had been present at Apollo’s birth and carried him across the sky, thus deriving from him the gift of prophecy. And it had been the Athenian tragic poet Aeschylus who first recorded the belief that the swan foresees its death and emits a strange cry, the swansong, in mourning. My heart beating fast, I pulled out my painting and looked at it again. There were five swans; there had been five puppies in Apollo’s litter.

And finally, I returned to the Native American material on swan medicine. There I rediscovered a sentence that had had no significance earlier: “You must be willing to accept whatever the future holds as it is presented, without trying to change Great Spirit’s plan.” The loss of Apollo was one of those experiences that can leave a scar, but suddenly I understood. The swans had descended on the lake that day with a message: “Do not take this life too seriously. There is more here than meets the eye.”

So Apollo’s death was not an ending; it was a beginning. 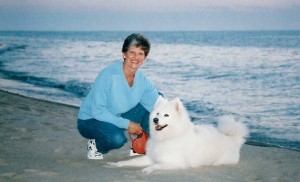 Ellen and Cassie on Lake Michigan

In a few days, I located another beautiful little Samoyed in Canada, and we named her Cassiopeia, Cassie for short. Over the ensuing 14 years, we walked thousands of miles together in a natural world through which a voice that was wise, firm, and sometimes good-humored could respond to a need for guidance. Four years before she died, two signs appeared on our path that confirmed my belief that it was time for Cassie and me to travel on alone, and so we did.

So this is the story of my spiritual breakthrough. It came to me through not only a complex experience with synchronicity but also a lifelong cultivation of knowledge about symbols that became a kind of language I could read in nature. But we all have a language, don’t we? We create it through our gifts and interests, what we see, what we hear, what we yearn to know and to learn. I kind of think that whenever we want spiritual guidance, all we have to do is pay attention. Surely the source we imagine is eager to respond–and speaks every language there is or ever has been. After all . . .

3 Responses to “An Initiation Descends on White Wings”