According to Susan Cain, author of Quiet, between a third and a half of Americans are introverts. Is that you?

This is an important question in view of the subtitle of Cain’s brilliant book: The Power of Introverts in a World That Can’t Stop Talking. Did that subtitle give you a sense of relief? Then you must be an introvert. So is Susan Cain, whose book is now in its sixth year on The New York Times Bestseller List. 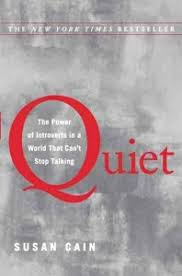 I guess I had never given this issue much thought, but the friend who recommended this book no doubt detected evidence that I am an introvert. This is a little uneasy-making in an extrovert-nation. Who says we are?

Alexis de Tocqueville, the French diplomat and historian, saw this emerging profile when he wrote about us in the nineteenth century. As historian Richard Hofstadter put it, Tocqueville saw that “the democratic and businesslike character of American life put a premium upon rough and ready habits of mind, quick decision, and the prompt seizure of opportunities. . . .”

Cain calls our value system “The Extrovert Ideal”–“the omnipresent belief that the ideal self is gregarious, alpha, and comfortable in the spotlight. The archetypal extrovert prefers action to contemplation, risk-taking to heed-taking, certainty to doubt. He favors quick decisions even at the risk of being wrong.”

According to Cain, this ideal came into play with the rise of big business in the 20th century. Her book came out in 2012, so she had no idea that our next president would be a paragon of the archetypal extrovert who has ascended in the world of big business.

THE INTROVERT BEHIND THE SCENE

Since Cain is herself an introvert, one goal of her writing is to encourage introverts to feel a newfound sense of entitlement to be who we are.

Of course, there is a continuum of characteristics among both introverts and extroverts, including many that are shared to some degree. So where are you on the spectrum? To provide an opportunity for analysis, Quiet has a questionnaire beginning on page 13. With these questions as a reference, I can offer myself as an example of how one may deviate from “perfect” introversion.  There are 20 questions, and I responded “true” to 19 like “I enjoy solitude,” and “I dislike conflict.” But when I got to “I’m not a big risk-taker,” the response was “false.” The “empty-handed leap into the void” is a frequent pattern in my history. I love the time in flight and tend to forget about the landing.

But here are some of the general characteristics of the introvert as defined by the psychologist Carl Jung. To paraphrase, he describes the introvert as a person drawn to the inner world of thought and feeling, who tries to find meaning in swirling events, and who takes refuge in solitude. Cain adds that introverts have formidable powers of concentration and are “relatively immune to the lures of wealth and fame.” After all, wealth is often a show-off pleasure for extroverts, and in this era when verbal assassins troll media waters for victims, obscurity is safer.

A mission may be alive and well, however, in the territory of obscurity. This is where Cain’s subtitle comes in regarding the power of introverts. Power doesn’t have to be noisy, and a quote in the book by French-American writer Anaïs Nin evokes the need to exercise it through contemplation:

Our culture made a virtue of living only as extroverts. We discouraged the inner journey, the quest for a center. So we lost our center and have to find it again. 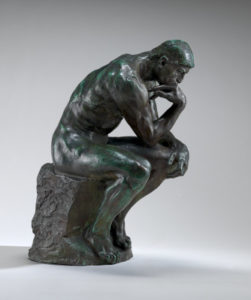 Her perspective was the tumultuous time of the 60s and 70s, and our “center” seems to have been wobbling around ever since. Her quote sounds like a challenge to the introvert, the personality known as “the thinker,” whose primary territory is writing, the arts, philosophy, academia, and science–typically, the quiet voice in a “loudmouth world,” as Cain puts it.  And one issue lying before us is what to do to improve the way our democracy functions.

For example, it’s obvious that an extrovert is most likely both to run for Congress and to get elected. “Screen” appeal is vital, and the ordeal of running and continually “schmoozing” with constituents, lobbyists, donors, and the press while cultivating as much air time as possible leaves very little opportunity deeply to consider issues. With members of the House of Representatives, the need to be reelected every two years means that they never stop “running.” This is not a criticism; this is just the way things are.

So some deep thinking needs to begin about how to enhance the way democracy works. I won’t go into detail about possibilities here; however, one thing needs to happen up-front. The constant sniping at liberals in a nation that extroverts rule needs to come to an end. Liberals tend to be the “thinkers” as opposed to the “doers.” And to retrieve an important point from Cain’s book, the introvert’s penchant for thinking can be a great asset in the business world as well.

Cain reports on an interview with Jim Collins, an influential management theorist. He said that the best performing companies of the last century were run by what he calls “Level 5 Leaders.” These CEOs “were known not for their flash or charisma but for extreme humility coupled with intense professional will.” I really liked the lesson Collins shared: “We don’t need giant personalities to transform companies. We need leaders who build not their own egos but the institutions they run.” That would be good at the head of the nation as well.

I think Quiet is a very important book that may inspire anyone on the extrovert/introvert spectrum to develop a larger sense of purpose. I don’t feel in the least inclined to challenge the idea that America is an extrovert nation, but I think we can be a more peaceful and more admired extrovert nation. That will come from challenging ourselves at the grassroots level to embrace more substance than style and to do more of our own thinking instead of consuming so much offered by our media pundits. We will not find great leaders among those who are great entertainers. We need to look, rather, for those who have a proven ability to serve the common good.

And that would include Susan Cain. She speaks in her book about her own fear, as an introvert, of public speaking. In a 2012 TED Talk (viewed by nearly 20 million people) she has clearly overcome that fear. You may enjoy watching–while preparing for your own reluctant moment on stage.

2 Responses to “An Introvert’s Perspective on an Extrovert Nation”