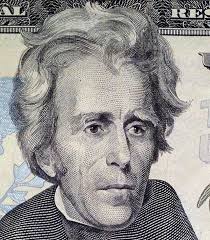 “It is to be regretted that the rich and powerful too often bend the acts of government to their own selfish purposes.”

Every incoming president does a bit of redecorating in the White House, and Donald Trump has moved a portrait of Andrew Jackson into the Oval Office. The portrait hangs on the wall to the left of Trump’s desk. Is he aware of the “left” symbolism? And ironically, Andrew Jackson was the founder of the Democratic Party in 1828. Trump reveres him for his so-called “populism.” We’ll see what that means over the long run.

This is significant to me because I had a personal, metaphysical experience with Andrew Jackson. I don’t have fond feelings for him, but I can credit him with an awakening that occurred about 20 years ago when I moved to his home town of Nashville, Tennessee.

This was a “return” on at least two levels. My roots are Southern, and virtually all of my family still lives there except my siblings. I was born in Louisiana, but my father moved us to El Paso when I was four, and that is where I grew up. We sometimes visited relatives in the South, but establishing a home there was a very different thing for me. It felt like a return not only to the South but also to the past, an uncomfortable past, known mostly through the study of history.

Even though I had chosen the beautiful home perched on a steep hill in a new development, I was inexplicably uneasy about it from the beginning of my residency. My days were shadowed by apprehension, even foreboding. Finally, I resorted to consultation with a psychic. Her perception was that our home had been built on a site sanctified for a shaman, and she recommended some rituals to improve the energy.  A few months later, I discovered an historic marker several miles away at the grave site of indigenous people who had lived there 300 years before the arrival of the Spanish conquistadors.

Now I understood that my unease could be due, in part, to violating sacred space. However, I was also troubled by the unfamiliar racism afoot in Nashville. It was mostly subtle among the people I met, but every now and then something was said that would cause my ears to tense. I will never forget a moment at a very elegant garden party. The hostess and I were chatting in a very friendly way when she shared that she was working out at the gym to develop a tight little “nigger butt.”

The bottom line was that virtually from the moment I arrived in Nashville, I wanted to leave. I was also having trouble adjusting to my new life. Due to a huge shift in my husband’s career, I had abandoned mine to keep the hearth so that my stepchildren could be with us as much as possible. My husband was traveling a lot, and my primary companion was a beautiful Samoyed puppy we had acquired to make the children’s visits more pleasurable. And here was the good thing: Cassie and I walked countless miles together in the woodlands around Nashville, which were the most beautiful and animated I have ever known. 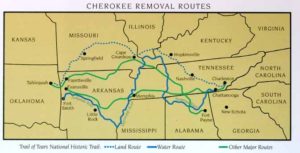 Nevertheless, I continued to be troubled by a creeping psychic discomfort caused by something I couldn’t name. And then one day I was reading a history of Tennessee at the library amd my heart began to beat faster. I learned that in 1838 the US government had initiated removal from the Eastern United States of about 18,000 members of the Cherokee nation. Between 1,700 and 1,800 Cherokee on the “Trail of Tears” to Oklahoma had spent part of the winter in Nashville in temporary stockades. Dying by “tens and twenties everyday, ” some 4,000 Cherokee eventually perished due to exposure, illness, and government rations they were unaccustomed to during their exodus.

As I sat there shaken, staring at the pages, I knew that this was what had been bothering me. Somehow I knew about this, one of the darkest events in American history. How I knew I can’t say. A past life in Nashville? A memory inherited in my DNA? An energetic residue of the tragedy that would never clear?

And by whom was the historic Indian Removal Act at the heart of this tragedy signed into law? By President Andrew Jackson. It’s a complicated story, but for decades white settlers had been trying to move Native Americans westward through land trades and treaties, and the effort intensified when gold was discovered on Cherokee land. In the end, Native Americans were forcibly exiled–land stolen, homes destroyed–through a law Jackson introduced as  “the benevolent policy of the Government.”

At the heart of my own sense of connection with this event was the feeling that I had some responsibility for it. Perhaps many of us harbor a degree of guilt for the wrongs done by this nation in many ways. Mine about the Cherokee would result in the writing of a song.

I escaped Nashville after only one year, and upon getting settled in McLean, Virginia, I began to work seriously at my piano, taking lessons and learning how to compose on a computer keyboard. And here are the lyrics for “The Trail of Tears,” which I completed in 1997.

They say we are a family, black and white and Cherokee, all siblings in the family of man,

But our faces speak so explicitly of fears and jeers and injuries that love must wait while anger holds our hands.

There are wrongs it seems on every side, and someone must apologize for hearts to mend and peace to have its day,

“But how can this pertain to me?” I ask the heirs of infamy. “I bear no blame for sins of other days.

Oh, I’m not to blame for sins of other days. Polite to all, the past I deprecate. I’ve lived my life a fair and friendly way.

I’m not to blame for sins of yesterday.”

But then I moved to Tennessee where history is my memory of times and ways my modern mind deplores.

There were blacks and me and Cherokee and folk were owned while I ran free, and the Trail of Tears led past my bolted door.

Oh, the Trail of Tears led past my bolted door. I can’t believe I’m guiltless anymore.

I’m more enlightened than we were before, but the Trail of Tears once passed my bolted door.

I know we are a family, black and white and Cherokee, all siblings in the family of man.

We are part of all that ever was, the hope of what is yet to be, the keepers of the memories of this land.

The keepers of the memories, the authors of the yet to be, the prophets of the future of this land.

So there you are, a very humble effort, but it was a comfort to me. And now for one ironic little postscript. There was a rare book store in Nashville, and I was browsing there one day and discovered a small book on the Trail of Tears. I was approached by the owner, who took me into a back room to show me a much larger volume,  Myths of the Cherokee and Sacred Formulas of the Cherokees by James Mooney. The gentleman standing in front of me, Charles Elder, was the publisher. He said he was part Cherokee and wondered if I were, too, from the color of my skin. Startled, I told him that I wasn’t–as far as I knew.

But back to the opening quote by Andrew Jackson. It is a reflection of his belief in himself as a representative of populism, advocacy of the common people. However, the Cherokee were common people, and Jackson was allied with the rich and the powerful who ruthlessly acted to take their land and move them west.

And the meaning of Jackson’s new notoriety may be as follows: If you’re not fully conscious of the significance of your acts and their consequences, you can develop a myth about who you are and what you’re doing. Jackson’s presence at President Trump’s left shoulder will be an ever-present reminder of that vulnerability.

4 Responses to “Andrew Jackson Returns to the Oval Office”