“Our version of the real world may be the most fleeting of pleasures.”

Craig Childs, author, of Apocalyptic Planet, can write up a storm. His “portrait of a moment on earth,” as he puts it, reveals the perfect one that is coming.

I went to his recent speech sponsored by Southwest Seminars and was impressed by his earnestness, energy, and eloquence. Author of many acclaimed articles and books about the natural world, he has the bearded, rugged look of the adventurer he has been in doing his firsthand research. He spoke on a presidential debate night, and half the audience left at the hour; the rest of us stayed for two and had to be encouraged to leave.

Childs, who has a master’s degree in desert science, is not a climatologist but an acute observer of landscapes that reveal the advance of global warming. He explains at the outset that the Greek word “apocalypse” originally referred to the lifting of a veil or a revelation, not worldwide destruction. His book, he says, is about both.

He writes to reveal what could be coming fast if we don’t do something. He is very knowledgeable about the cycles the earth has always experienced, but he concludes that human activity is vastly accelerating the close of the very hospitable Holocene Epoch. The descriptions of his travels banish once and for all the illusion that “Everything is going to be all right.”

Childs chose to visit nine different places on earth where alarms are ringing. Among them are the desolate Sonora Desert of Mexico, the melting ice fields of Patagonia in Chile, rising seas off the coast of Alaska, and the “tectonic madhouse” of Tibet. During every exploration, he and his companions endured profound discomfort or hardship and danger, and his genius at description also imaginatively taxes the reader. 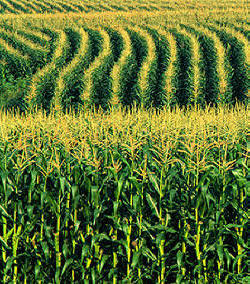 Although Childs traveled to many exotic locations, the chapter that most affected me related his study of a genetically-modified crop of corn in Grundy County, Iowa. He explains that this site provided the most vivid picture anywhere of manmade, genetic exhaustion. During his summer visit, nine hundred record highs were set across the country, and the heat index soared nearby to 129º.

Childs and his friend camped in the fields at night and sweated rivers during the day as they struggled though “DuPont” corn eight feet tall, stems as smooth as plastic tubes, and “parrot-feather lime leaves” with edges like knives. They walked with sleeves rolled down in spite of the heat, handkerchiefs covering their faces under glasses to avoid cuts that could be invaded by altered genes and pesticides.

No other plants are allowed to survive within the corn rows on what had once been the richest farmland in the state. The plains had stood stirrup-high in plants like cord grass, switch grass, blue joint, side oats, and brome that have now disappeared.

Grasshoppers gathered on the edges of the crops but would be killed by pesticides or genetic toxins if they entered. During two days of searching for insect specimens, the men found a red mite, a cobweb spider, a katydid, and a stink beetle—and swarms of mosquitoes and lightning bugs at night. The soil under foot had been rendered sticky by petroleum products.

The corn has been genetically modified to feed millions, of course, but mono-cropping has its own dangers. Genetic engineers everywhere are in a constant race to stay ahead of the microbes and pests that continually evolve and could destroy millions of acres of food, causing mass starvation.

And then there is the problem of all the nitrogen-loaded fertilizers and the pesticides. Nitrogen has washed down streams and rivers to the Gulf of Mexico and created an algal bloom and a dead zone extending thousands of square miles. Marine life all over the planet is being similarly threatened.

Atrazine is one of the most common herbicides, and Childs states that some 75 million pounds are applied to corn and other crops every year. A study reported in the National Academy of Sciences says that exposure to the herbicide can result in “feminization” of male gonads in many creatures and even complete sexual reversal. Surely human mutation is afoot as well.

At one point, Childs has a private moment with the farmer’s wife, and she says, “I’ve been in this kind of farming most of my life. I don’t think what we’re doing is good for the earth.”

Childs’s entire book makes you think about that issue—what we’re doing that is not good for the earth. However, each one of us can handle only so much of the bleak picture. I keep a bin of composting worms that I feed with organic waste. In the spring I will add their castings to my sandy garden soil. It is a tiny thing but an expression of caring.  What Childs saw, what he has shared, could help take caring to a transformational level. Even still, as he writes, “Our version of the real world may be the most fleeting of pleasures.”