Dilemma – a situation requiring a choice between equally undesirable alternatives

(Before I begin this blog, I will explain my absence. After my last post on March 25, I became obsessed with completing a novel, The Black Stone, which I had been writing and set aside back in 2011. It is now “finished,” which means that countless revisions will follow. I will have more to say about it later.)

BACK TO THE ELECTION

During the time in which I was otherwise occupied, the swarming, partisan ridicule in the presidential election seemed to distill into two insults for the leading contenders: “Bitch!” for Hillary Clinton; “Buffoon!” for Donald Trump. Now these are not my words. I’m using them for my title because they are eye-catching.

Few of us really know these individuals, and a brutal political process has no patience with complexity. So in the case of Hillary, the minds of those who rail against her seem to have resurrected those ancient images of the demonized feminine in Greek mythology. The one most familiar is that of Medusa with hissing serpents coiling around her head, eyes searching for a man to turn into stone. 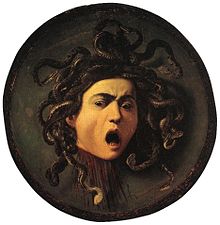 Hillary Clinton is powerful in a way unusual for a woman, and I think it is safe to say that her persona is scary to many men. It also puts many women in an odd place. The 2016 election has been described as bombastic and “testosterone-fueled.” The question comes up: “Do I want my sex represented by a woman who has more testosterone than her male opponent?”

A recent article in The New York Times Magazine brings this testosterone issue to mind. The author is Mark Landler, and the title is “H Is for Hawk.” This is a provocative new use for the title of a bestselling book about a goshawk by Helen MacDonald. In Landler’s article, the word hawk refers to a politician who supports military action. He identifies Hillary Clinton as “the last true hawk left” in the presidential race.

So can we trust Landler’s perspective? A little research revealed that he has written for the Times since 1995 and covered the State Department when Hillary was Secretary, traveling with her to dozens of countries. I  also found an interview he gave on NPR about his new book, Alter Egos: Hillary Clinton, Barack Obama and the Twilight Struggle Over American Power, and it softens a bit the image of Hillary created by the title of his article. His purpose seemed ultimately more to inform than alarm.

Nevertheless, Landler’s conclusion is that Hillary is of the old school in the belief that “the calculated use of military power is vital to defending national interests.” He chronicles her effort over time to cultivate a close relationship with the military brass, “especially generals with battlefield experience.” One can probably safely assume that the intention was to prepare herself for the role as commander-in-chief, which would be wise. But how active would that role be? Do we want the old warrior archetype in office in feminine armor?

Landler shares an anecdote in his article that is telling in this regard. A month after the 9/11 attack, Hillary met with General Buster Hagenbeck, who would soon be deployed to Afghanistan. The article records the general’s memory of their first meeting: “She sat down . . took her shoes off, put her feet up on the coffee table and said, ‘General, do you know where a gal can get a cold beer around here?”’ Hagenbeck was not resentful, but the body language in this moment is not becoming, especially the bare feet. The symbolic inclination to overstep was resting on the coffee table–a general’s coffee table.

We all have bad moments, and the standard for women should not be higher than for men. I believe that one of us could someday make an outstanding president. However, I’ve always thought that the need was for something new in terms of style and perception that could prove as effective as intimidation. Hillary Clinton has had to be tough and calculating, perhaps even ruthless, to get where she is. Would she modify that way of being in the White House?

And since I’ve brought up mythology, archetypes, and symbols, let’s look at the significance of Hillary’s bosom. In the collective unconscious, it is associated with nurturing, compassion, and Mother Earth herself.  These are not qualities or a connection that Hillary fulsomely projects. As Landler puts it, her history has been one of “jet-fueled ambition.” This may have resulted in the loss of some classic feminine sensitivities that might be appropriate in an era when humanity is increasingly ravaged by conflict and climate change.

It’s just very hard to figure all the angles on Hillary Clinton as president. She might be very strong and appropriately aggressive. On the other hand, the military muscle that she has favored in the Middle East could be like trying to contain a swarm of enraged bees by continuously attacking their hive. If the consequences are disastrous, then the response will sound like this: “See? Women have their place, and it is not behind the big desk in the White House.”

On the other hand, if a radicalized Republican Party astride the warhorse of misogyny attacks and thwarts President Clinton at every turn, no matter what the issue or her position, that could result in a feminine revolt that would be transformative. Perhaps we should risk that.

However, in general it looks as though committing to Hillary as president is much more complicated than voters’ party affiliation or sexual identity. On the other hand, Donald Trump could ultimately prove so scary that the decision is a no-brainer. And as a hint about my next blog, “Bitch or Buffoon? Part 2,” I have a memory of him as unsettling as Hillary’s barefoot moment with the general.

One Response to “Bitch or Buffoon? Part I”