Who would ever have thought that the Harrell House of Natural Oddities and Bug Museum would rank #2 in “Things To Do in Santa Fe”?

This comes from TripAdvisor, where people write in to review and recommend. By their standards, Harrell House ranks second to the Santa Fe Opera House and ahead of all our many wonderful museums and art galleries, the Plaza, the St. Francis Cathedral, and on and on. And this has happened even though the museum opened only last year. Something very interesting is afoot–especially for tourists with children. 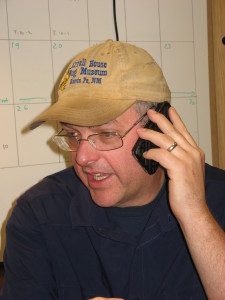 This is very early in the story of Harrell House, but the future looks promising. In 2012, Wade Harrell left a good job at a nature center in Virginia and set off with his wife, Beth, to move to a city they had never even visited before. They had no money, as Wade puts it, and they drove into town in July in a 10-year-old Chrysler van with no air conditioning. From the perspective of an objective observer, one thing after another happened that seemed to say “You’re doing the right thing.”

With his wife employed and a Canadian investor now involved, Wade first set up a little kiosk in the DeVargas Mall. He was selling kits to construct dinosaurs and insects, and I bought two as Christmas presents. He also had on view and under glass some spectacular dried insects. One was a giant scorpion. One day Oliver “Ollie” Greer, a former chef and passionate collector of insects, walked by. He was instantly “desperate,” he says, to own the scorpion, and their partnership began.

Wade’s part of Harrell House, which is now contained in retail space next door to the Outdoorsman gun shop, consists of toys, kits, models, art,  and his collection of live insects and reptiles. This includes a giant and reclusive lizard and a hefty tortoise that could eventually weigh 100 pounds.

Wade’s passion for collecting had begun when he discovered a Hercules beetle in the woods when he was a child. His territory of interest expanded, and when Beth first met him, he had a three-foot-long Caiman alligator in the front room of his home, an 18″ soft-shell turtle, and terrariums full of tarantulas and frogs. It was Beth who urged Wade to “follow his bliss” in Santa Fe. The West is a great region for collecting specimens. The Harrells had been to Arizona many times for meetings of the American Tarantula Society but couldn’t deal with the heat.

The museum displays are fascinating even to adults. Ollie now has on view about 2,500 insects that he has personally mounted, and one feels such wonder at the incredible beauty and creativity of their designs that it is almost a spiritual experience. He has his own way of presenting them, with legs fully extended so you can see their size. People who have visited exhibits at places like the Smithsonian say that the diversity and artistic presentation here are the best they have ever seen. Eventually there will be more than 7,000 insects on display.

As a result of the museum, Ollie got a great job with an energy company. The owner is an exotic animal buff, and he saw in Ollie’s work the meticulous attention to detail and the manual skills he needed for technical work in his own company. As I said, many things seem to be working to support this enterprise.

One of the favorite parts of visiting the museum is the moment when Wade works with live specimens. I asked if they had personalities, and he responded that they typically don’t live long enough. However, his Chilean rose tarantula has been with him 10 years and is very amenable to being held and turned over in his palm. He pointed out the hairs on the abdomen that are very irritating to the touch. 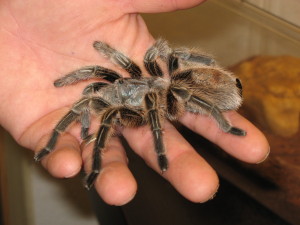 Wade explained that when you see tarantulas crossing a highway, they are in pursuit of females. The ladies are larger, and after they mate, the male is “just another bug” that can be eaten as nutrition for the babies. For that reason, tarantulas tend to mate and run. Survivors may live as long as 35 years.

Next Wade took out a praying mantis, and here again the male may be eaten after mating. This specimen was in autumn camouflage, with a tail she could flutter like a leaf in a breeze. Regally erect from abdomen upward, she wore a high, elaborate headdress. Surely she must be the empress of the kingdom of insects.

After working on this blog, I went back to the museum, hoping to get a good photo of the praying mantis on Wade’s finger. However, he was having to multi-task on the phone, working with someone on a computer issue, and my camera was not adequate to the task. If you go, though, you must ask to see her. She is amazing.

Interestingly enough, Wade’s college degree is in art, and he has epoxy sculptures of creatures throughout the museum. The powers of observation and creativity that go with artistic talent must contribute to that eye of the collector and the creator of displays that both he and Ollie share. Ollie also began as a boy, and his first treasure was a pepsis wasp.

Sometimes when I walk by the museum on errands, I can hear the squeals and excited voices of the children within. It is really wonderful to know that they are enthralled by nature rather than some new form of technology. Parents must feel the same way, and that’s why so many have gone to TripAdvisor to give it a five-star review. 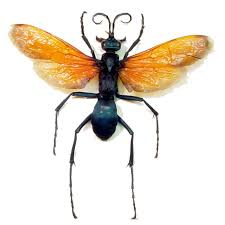