What’s your totem? Isn’t it time to consult with it?

This is a very stressful moment in history, and communing with your totem might be better than going through your days muttering, “What are we going to do about North Korea?” Of course, you could also take a walk in nature, but it’s disappearing moment by moment. Was that not helpful? Maybe I should start over.

I’m coming from the place of a person who has been very fortunate to spend a lot of time communing with nature. I not only have vivid memories of what I saw but also a grounding in the idea that creatures can sometimes function as spirit guides.

Over more than a decade of woodland rambles with a beautiful Samoyed named Cassie, I tuned into the natural world as a teacher. That experience was further enriched by a shamanic practitioner who introduced me to my power animal, a lizard. I learned to consult with Lizard through journeying into a dimension known as non-ordinary reality. (Gotta go visit YouTube? OK. You’re excused.)

Now I will clear up the confusion that has erupted in remaining minds over the difference between a totem and a power animal. I guess shamans and mystics could get into a big debate over this; but in my own universe of experience, a totem is chosen, or rather recognized, by the individual. A power animal, on the other hand, is identified by a shaman or practitioner as the embodiment of a spirit that has chosen to be your guide, whether you know it or not.

In both cases, the creature has unique characteristics and ways of being in the world that are illuminated in myths and stories that have long guided people whose spirituality is nature-based. Often its characteristics will enlighten individuals about the way they do or could or should present in order to deal with specific challenges. At this moment in time, the inquiry into one’s totem or power animal could be grounding.

I should begin with the totem, which is relatively easily discovered in one’s own consciousness. Before I go any further, I will refer you to a book called Animal Speak by naturalist and mystic Ted Andrews. It is largely devoted to the characteristics and significance of animals, birds, reptiles, and even insects that are often identified as totems. In the beginning, he also presents a ritual–really just a way of getting into a quiet and receptive state–to discover this creature.

Often it is one that you realize has always fascinated you or has made itself known through an unforgettable encounter. My totem manifested as an elk. I was over fifty years old when I “saw” it, but I instantly remembered this documentary in high school called “The Olympic Elk” and the dramatic image of a huge elk with enormous antlers standing on top of a mountain. Antlers are often associated with antennae, which are “receivers” in  my own mind. Beyond those antlers, the elk’s primary protection against predators are a strong and steady pace, tremendous stamina, and a body that has evolved to leap over obstacles and climb powerfully. Nice imagery.

As I said, Lizard is my power animal; and when my friend, a shamanic practitioner, identified it for me, she was initially concerned. She thought I would be disappointed, having been hoping for an eagle or lion or something like that. However, I instantly resonated, having grown up around lizards in El Paso. And when I imaginatively consulted with Lizard over the ensuing years (I wrote a book about it called Lizard Diary)  I discovered that he was chameleon-like, a real character showing up in many different guises. He was always wise, sometimes humorous, and sometimes disciplinary.

Who knows how this works, and it may be that through an imaginative connection and altered states of consciousness, one gains access to embedded wisdom rather than spirit guidance. Whatever the truth of the matter, I found it a very valuable resource through a challenging decade of my own history.

Even now, I know that I can turn to Lizard at any time. He will be waiting–enormous and yet lizard-size–in the hole at the base of a tree. He may yawn pointedly, having waited patiently for months, maybe years; but I will get on his scaly back, and we will descend into the Underworld. There I will dismount and head into the landscape that has appeared to find guidance through whatever manifests.

I have all sorts of lizard images discreetly placed throughout my home, but one framed image by nature photographer David Schneider probably best represents the personality and intelligence of Lizard. Ted Andrews defines its keynote characteristic as “subtlety of perception,” a great survival skill. And as everyone knows, an escape tactic is to leave the tail in the mouth of the predator and grow another one. That seems to speak to the fact that change has always been my natural element. 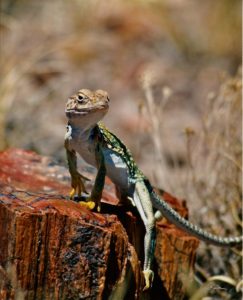 In conclusion, I concede that I may be a bit unusual, but I’m serious in making this point. We are indeed living through a very trying time, and many people edified by organized religion are turning  to prayer for comfort. I always think of that as symbolically looking up to the sky to appeal to a divine presence. In my walks with Cassie, however, images and experiences seemed to manifest that suggested the script of the same being imagined above.

You do have to pay attention, though, and believe that a coincidence can be a message-bearing synchronicity. If you glance out the window, for example, and discover a big hawk sitting on a fence watching you, it might be wise to look up the meaning of hawk relative to what’s on your mind in the moment. Or you might just pause and revel in its beauty, feeling grateful for all the magnificent birds that yet endure in our troubled skies.

Tuning into the wonders of the natural world would be such an improvement over fretting over North Korea. And now I’m going to go for  a walk along our trail and see what I see.

3 Responses to “Calling All Totems”