I wish we could get some new songs.

I listen to contemporary music mostly when I’m driving, and it all seems to be about love. Love, love, love. Haven’t we covered this? And there’s a lot going on that seems to me song-worthy.

This occurred to me one day as I drove down a rustic road. Plastic bags impaled on the barbed wire fence were flapping in the wind that was also stirring up the roadside litter. Overhead, crows skillfully soared in search of something to eat—something not synthetic. Poignant, don’t  you think? Wouldn’t that make a good song?

Maybe Bob Dylan could do this. 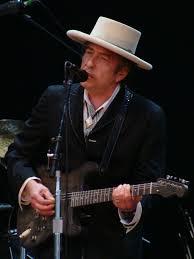 I should confess now that I’ve never been much into popular culture and only recently discovered Dylan. His songs, like “Blowin’ in the Wind” have always been in the background, but I never paid much attention. However, I perked up last year when the Swedish Academy awarded him the Nobel Prize for Literature. What?

It’s good to be humbled every now and then, and I have been. To begin with, I couldn’t get over how lengthy the Wikipedia site summary of Dylan’s life and achievements is. He will be 76 on May 24, and he has been performing and composing for 50 years, having written well over 350 songs to date and sold over 120 million albums worldwide. Wow.

Maybe I didn’t tune into the words because of the sound. In a tribute to Dylan, David Bowie said that he had “a voice like sand and glue.” But look at what people said about the words: Academics have compared his lyrics to that of classical poets like Virgil and Homer and Ovid and even to Shakespeare.

His peers like Johnny Cash, John Lennon, Bruce Springsteen, and Leonard Cohen have also paid him homage as he created a body of work that rolled through folk, blues, rock and roll and on to what has been described as his own “original artistic voice and vision.”

Of course, not everyone agreed, not out of ignorance like me, but maybe because of  jealousy or some sense of imagined superiority. One critic whom I shall not name described his Nobel Prize as “an ill-conceived nostalgia award wrenched from the rancid prostates of senile, gibbering hippies.” Maybe this critic is younger.

The Voice of Change

All this made me very attentive to my two first CDs. One is a collection of “The Very  Best of Bob Dylan,” and the other is “Tempest,” which came out in 2012. I can’t always hear him very well, so I have googled certain songs.

Since I had been wishing for music appropriate to the moment, I found it in “The Times They Are a-Changin’.” It was written in 1963, and this era is often compared to that one, although it seems as though the older folks are the ones stirred up now, not the young ones.

The first verse seemed particularly appropriate: “Come gather around people/Wherever you roam/And accept it that soon/You’ll be drenched to the bone/And if your breath to you is worth saving/Then you better start swimming or you’ll sink like a stone/For the times they are a changing.”

Watery imagery returns in the song “Tempest,” which is 14 minutes of lyrics describing the sinking of the Titanic. I get kind of hypnotized by the melodic repetition. It was composed in 2012, and Dylan couldn’t have known what was coming, but there is a creepy connection with the sinking of the ship of state currently imagined in some quarters.

Apparently, academics lobbied the Swedish Academy to consider Dylan’s lyrics for a couple of decades before they actually did, and I feel SO far behind them and all my peers who recognized his genius maybe from the beginning. I kind of wish I could go back in time to travel along with that enthusiasm, but I guess I have some catch-up work to do.

I also realize how very unlikely it is—unless readers can educate me otherwise—that any contemporary artist can come close to reflecting the current issues of our culture the way Dylan has always done. I wonder if he is writing even now. Maybe he will come up with something wonderful about the meaning of this moment in history.

Since 1988, Dylan has been on a Never Ending Tour of the world and is in Europe through May. On March 31, he will come out with a three-disc album called “Triplicate” featuring 30 classic songs by other great American songwriters. This seems like a nice thing to do. The last one is “Why Was I Born?” by Billie Holiday. Surely Dylan knows by now his own answer to that nearly universal question.

Maybe this inquiry will inspire me to get my piano tuned up and actually write a song about plastic bags on the wire. That sounds familiar somehow. Oh, right. Not Bob Dylan, “Bird on the Wire” by Leonard Cohen. He was wonderful too.