Maybe the way climate change is effectively addressed will be cynical by some. Whatever.

Before moving to Santa Fe, I had never lived in a community so concerned about health and well-being. It is infectious, and every time I buy eggs now I examine cartons in search of happy chickens.  As other evidence of this culture, there was a standing-room-only audience last week when Dr. Robert Lovejoy spoke on “A Wild Solution for Climate Change.”

Dr. Lovejoy’s speech was sponsored by the Santa Fe Institute, which is dedicated to theoretical scientific research. He is credited with founding the field of climate change biology, and his list of honors and achievements in the field is awe-inspiring. As I listened to his talk and watched the slide show with statistics, charts, and images tracing the advance of global warming, I wondered how anyone could dismiss such evidence. But then I guess no one in a state of denial would even want to see it. 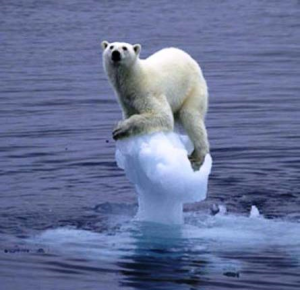 In his early seventies now, Dr. Lovejoy (Ph.D. from Yale) has confronted skeptics throughout his career, and he was unusually self-possessed. He seemed at peace, a man ready to let the chips fall. He had recommendations about what to do to mitigate climate change, but the responsibility for acting on them now largely resides elsewhere. He announced a deadline: Emissions must peak by 2016.

His biological recommendations for meeting that deadline pertain to restoring our ecosystems, primarily through (1) reforestation, (2) protecting and enlarging grazing lands, and (3) changing agricultural practices to stop tilling, which releases CO2. Pretty simple.

The problem is that meeting that 2016 deadline depends on a critical mass of people accepting our role in the acceleration of climate change. At the moment, that doesn’t look likely. Many discouraged scientists probably wish they could live long enough to say, “I told you so.” However, many deniers aren’t worried about the worst consequences they probably won’t live long enough to see.

If civilization is going to forestall the impending catastrophe, I think help will have to come from somewhere else than the scientific community. I have figured out what that could be: American capitalism. The following is a fictional meeting that illustrates how it would work. The reader is invited to imagine that a chief executive officer has called a meeting to introduce a new corporate strategy.

MR. KINGSTON: Well, welcome everybody, and I’m glad you could be here for this important announcement. Someday you’ll look back at this moment as the turning point in this company–the moment we moved from being solidly profitable to an industry leader.

Just to summarize for you, the ARS product can be installed on any flat roof. It combines solar power with condensation. We’ll show you how it works in a minute, but a 3,000-square-foot-home can produce ten gallons of water a day. Just think how those folks in the desert are going to feel. We’re going to help them survive climate change. Jimmy, you’ve got a question?

MR. KINGSTON: Global warming is a crock? It is, but we can make a lot of money from the people ignorant enough to believe in it, and that number is growing.  It’s going to be your responsibility in marketing to make this work, so listen closely. We’ve already got TV ads to launch all over the Southwest, and we start like this: “The climate goes through cycles, and we’re in a hot, dry one right now. Things will get better, but you’re going to want to be prepared for a possible repeat.”

Then a little later, we ramp the ads up a bit: “With this roof, you’ll be getting water that you can use to grow a green lawn and plant trees and a vegetable garden.” Now we’re talking to the greenies who have heard this will cool things off a bit. On down the line, we turn up the dial and go after everybody else:”With this roof installed, you’re a part of the solution to climate change. You’re not only making your life better, you’re helping to transform the entire world.”

JIMMY: But Mr. Kingston, that sounds like we’re now turning into global warming alarmists. That isn’t . . .

MR. KINGSTON: You’re not paying attention, Jimmy. We can make money off of global warming. A lot of money. We’re going to be developing a whole line of products to reassure consumers we’ve scared to death with escalating ads. We’re going to be there to make them comfortable, and save them money and the planet. Get it?

And thanks for bringing his up, Jimmy. I don’t want to hear one more word  from anybody around here denying global warming. If there is anyone here who doesn’t believe in climate change and human responsibility for it, raise your hand. (Stillness.) If you’re even a little uncomfortable with this strategy and all the money it will make for this company and our investors, feel free to walk out of here right now. If you stay, you’re on the team that will help save the planet. Any climate change deniers in here ? No?

Good. Now let’s get on with this meeting. We’ve got no time to waste before the world goes to hell. (Chuckles.)

So there it is. In many places right now, there are minds, both idealistic and calculating, trying to figure out how to profit from the climate change issue. As soon as sales start looking good, money will begin pouring in and innovation will take off. American products will travel the world over. Other economies will catch on, and ideas will spread.

Maybe it will be enough in time. If so, polarization will ebb and transformation will begin. The day will have been won not through head-to-head debate but through an alliance of science and commerce. Maybe the way climate change is effectively addressed will be cynical by some. Whatever. If catastrophe is avoided, we can extol American capitalism as the hero of the hour. Fine with me. I’m ready.