When the “paranormals” arrive to explore upstairs, the ghosts adjourn to the kitchen.

Coincidence is a blog’s best friend. Here I had been imaginatively keeping company with gunfighters all weekend, and when I picked up this morning’s issue of The New Mexican, the lead story was about a proposed “ammo” ban in Santa Fe. Thank you for the angle.

I had just returned from the little town of Cimarron (correctly pronounced Cimarrrroan) about two hours to the northeast. Today it has a population of about 900, and it began to develop in the mid-1800s as a way station for people traveling west on the Santa Fe Trail from Independence, Missouri. I had learned about the town from friends intimately involved with its history. In fact, in Sometimes Sidesaddle, Sometimes Astride, Marilyn Whiteman recorded the story of Mary Lail, the Cimarron legend who was her husband’s aunt.

The word cimarrón, which means “wild, untamed” in Spanish, may originally have been inspired by the flooding Cimarron River. However, the town will forever be associated with the gunplay that characterized the Wild West. And in fact, sister Kate and I stayed at the St. James Hotel, where practically everybody who was anybody in that colorful era passed through. That would include Jesse James, Billy the Kid, Pat Garrett, Bat Masterson, Doc Holliday, Buffalo Bill, and Annie Oakley among others. Many of the rooms are named after them.

The St. James was under construction by 1872, and it is a handsome adobe edifice that is so “period” that it almost seems a movie set. The woodwork and the furnishings are solidly antique. There are many handsome western bronzes on tabletops, including a Frederic Remington of horse and rider spooked by a snake. Antique rifles and pistols are displayed among works of art on the walls. 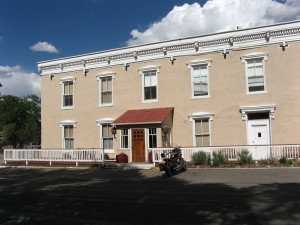 A mounted cougar greets incoming guests, who will proceed also to enjoy the society of trophy elk, deer, buffalo, antelope, wild pig, and even fish on the walls of dining room, bar, and sitting areas on the ground floor. Glass cases are filled with collections of cowboy gear, and there is a wonderful display of art and framed correspondence by Will James, who wrote the beloved book, Smoky the Cowhorse.

The hotel is similarly embellished by stories about the characters who visited, about the murders they committed, and the ghosts they left behind. Most of the violence seemed to occur in the downstairs bar, but one of the private poker rooms upstairs witnessed a shooting that ended with death in Room 18. The door is locked because the victim’s ghost does not enjoy visitors.

Altogether twenty-six people were killed in the hotel, most of them in the bar. The adult ghosts are accompanied by those of children of uncertain origin who are responsible for pranks. The dining room manager told us that when the “paranormals” arrive to explore upstairs, all the ghosts adjourn to the kitchen.

There was one gunfighter I would definitely not want to keep company with in ghost form. His name was Clay Allison, and he has captured the imagination of many people. He was tall for the times (about 6’2”), handsome, known for his southern charm, and probably a bit deranged.

I checked him out on Wikipedia, and there is a quote in the text from an 1860 Census interview. It reports that Allison had received a blow to the head early on, and emotional or physical excitement could produce outbursts that were partly epileptic and partly maniacal. He was discharged from the Confederacy as unfit to serve for this reason.  Drinking seemed to stimulate these outbursts, and they resulted in eleven killings in the bar of the hotel.

Allison ended up on a ranch in Texas after marrying and becoming a family man. Ironically, he died from breaking his neck in an accident with a wagon. There is no room named after him in the St. James Hotel, and I would not want to stay there if there were. His story crosses over the line from colorful to disturbing.

Even though I enjoyed my stay at the St. James, which featured wonderful service as well as great food, I realized on departure that I felt a little drained. I slept in the room named after Mary Lambert, the wife of Henri Lambert, who owned the hotel. It is supposedly occasionally suffused by the fragrance of the roses she loved. I did not pick up on anything like that, but I may have been affected by the scent of over 100 years of history. And one must wonder how long the energetic imprint of gunfire endures.

I so wish we would just outgrow the way in which gunslinging in general is romanticized in this country. Today the newspaper reports that City Council will be considering a ban on the possession and sale of gun magazines that hold more than ten rounds of ammunition. Opposition is mobilizing based on the assertion that this will be very, very complicated to enforce. After all, there are already “mags” out there of fifteen, twenty, and thirty rounds. How odd that one would begin to think wistfully of the safer days of the little derringer and the six-gun, but I’m there.

One Response to “Cimarron Today”