Before I respond to your burning question, “What does OTS mean?” I need to backtrack.

Synchronicity can be a wonderful blessing when you’re writing a blog, and I experienced that truth again this week. Revelation struck Thursday evening at a lecture on climate change by Gabrielle Walker, Ph.D. Her degree is in Natural Sciences from Cambridge University, and she has written three books on climate change including the best-selling The Hot Topic: What We Can Do about Global Warming.

So imagine this brilliant and attractive woman with long, silvery-blond hair standing on the stage, holding the audience spellbound as she brings feminine charm as well as knowledge to the case for climate change. She is speaking to the choir at the Lensic Theater, because Santa Fe is flush with environmentalists and scientists both active and retired from nearby Los Alamos National Labs. We get the picture.

Dr. Walker’s talk is fortified by a dramatic slide show, and it begins and ends with a stunning image. This is of Earth and Venus side by side. Because they are about the same size, they are sometimes referred to as “the twins.” The Earth tones are cool blue and green; Venus is a fiery copper color. It is sometimes called”the evil twin,” because the temperature there is 461.85º Centigrade. “Hot enough to boil lead,” says Dr. Walker. Earth has trace amounts of carbon dioxide; the atmosphere of Venus is 96.5% carbon dioxide. This is where we’re heading.

Dr. Walker proceeded with a speech that was full of data and detail about how the controversy on climate change has developed and is proceeding. The accomplishments by the climate conference in Paris in December 2015 are a bit encouraging and so was the news that some of the world’s most powerful men are springing into action. At the same time, it was also obvious that these initiatives will do little to mitigate a trajectory toward a 6º rise in temperature that will be the end of planet Earth as we have known it.

How could this possibly change? As we approached the end of the talk, the images of Earth and Venus remained suspended above the stage. Whether they were conscious of it or not, I wondered how many people in the audience registered subliminally the symbolism of those two orbs. They were evocative of breasts, and what Dr. Walker was talking about was the heat rising in Earth like a malignancy that will eventually create the inferno of Venus.

Now on to OTS

This is not the kind of imagery, however, that is out there to describe our situation; and it was the synchronicity I mentioned in the beginning that woke me up to the problem. An article on OTS, which stands for overtraining syndrome, was suddenly relevant to the drama onstage at the Lensic.  This may seem obscure at first, but it made me realize that it’s hard to grasp the danger of climate change until it is seen like a Greek tragedy looming. This takes us back to the time of oracles, heroes, and misfortunes that put humanity in touch with the cosmic moral order.

So back to OTS. A friend who is a geophysicist and an endurance athlete had sent me the article in response to one I had sent him about a supplement to support rigorous training. My friend is a cyclist, and OTS is a medical phenomenon that began to appear about 10 years ago among runners who train steadily at “the outer edges of human performance.” For example, one of the athletes featured ran 160 miles per week. 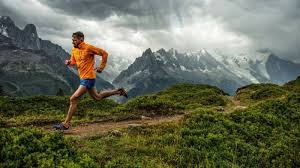 The Joy of the Ultrarunner

The article in question, “Running on Empty” by Meaghan Brown, appeared in Outside Online. It featured a number of ultrarunners who are the leading edge of athletes who are mysteriously breaking down in growing numbers. I say mysteriously because the experience has no explicit pattern beyond “an ineffable, confounding lack of ability.”

The symptoms are not only acute exhaustion but also severe shock to the parasympathetic nervous system. The body cannot rebalance after exercise, the heart sometimes racing for days afterward. Insomnia, depression, respiratory infections, brain fog, headaches, anemia, chronic dehydration–the list of symptoms goes on and on. And the legs tragically go “stale.”

This silent plague, as OTS is now known, can lead, as one sports medicine physician said, “to a full-blown identity crisis.” When a body has been taxed to the limit, the mind seems to take over and simply shut it down. How do you adjust to that new reality–which may go on for years, even forever–when the will is still there, the courage and passion are still there, and so is the desire to triumph over all comers?

I was haunted afterward by some of the stories in this article, and there was about the male athletes the characteristics of the classic Greek hero–a man who is highly renowned but experiences a disastrous change in fortune due to ignorance or some error of judgment. The classic Greek hero is, after all, a sympathetic character.

So what is the parallel with these individual tragedies and the looming tragedy of climate change? Well, let us imagine Dr. Walker on stage as a Greek oracle, only she is garbed in authoritative pantsuit and riding boots instead of a gown. Nevertheless, she is delivering prophecies like the oracles at the Temple of Apollo in Delphi. They reportedly fell into trances to receive guidance, and how ironic that carbon dioxide rising from volcanic faults below the Temple may have figured in those trances.

Our contemporary oracle speaks of the ways in which humanity has taxed to the limit the resources of Earth and disregarded the need for balance.  The consequences she warns us about come from violating the cosmic moral order as at work in Greek tragedies. And here comes the connection: Just as Earth is the host of humanity, the body is the host of mind and spirit. And whereas cosmic moral order has the upper hand on Earth, the mind does in the body. The ultrarunners have become prophets of the consequences of overtaxing the splendid potential of the body. The mind will simply shut it down to protect it from human will.

The consequences of climate change and OTS converge at the simple truth that if we lack access to wisdom, we may have to learn things the hard way. In the days of ancient Greece, people trusted the advice of oracles because they believed that they were informed by Apollo, the god of the sun. The scientists who are our modern-day oracles are much better grounded, to put it lightly. Since we have advanced so far beyond the resources at Delphi, perhaps we should listen to them. If not, a tragedy greater than humanity has ever known will continue to loom.

2 Responses to “Climate Change and OTS: The Return of Greek Tragedy”