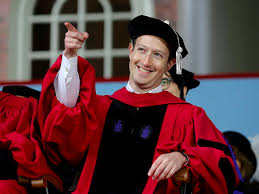 “To keep our society moving forward, we have a generational challenge–to not only create new jobs, but create a renewed sense of purpose.”

I’m so glad to have Mark Zuckerberg to quote, because as I continue to write about the evolving role of the feminine, his millennial generation will move into the spotlight. Coincidentally, his first child is a girl auspiciously named Maxima, and another little girl is on the way.

There is another meaningful coincidence in the timing of the speech quoted above and the celebration that followed a few days later. Zuckerberg, age 33, gave the commencement address at Harvard University on May 25; and on Memorial Day, May 29, the nation again honored the men and women who have died in military service. Perhaps one long-term purpose, especially among women, could be to end the need for an enormous military.

If you take a look at America’s history of war, the number of conflicts is amazing. It’s easy to conclude that “This is the way things have always been, and it will never change.” That may have been acceptable in the days of swords and musket balls, but of course we now have apocalyptic weaponry in the mix. Isn’t it time for more creative resolutions of international tensions?

And with women stampeding to prepare to run for public office, perhaps a new focus could emerge on the major cause of war–the fact that the manufacturing of weaponry has become a hugely profitable industry. As our “defense” spending continues to mount in anticipation and preparation for war, we will continue to have one after another.

Every day there is more nerve-racking news about arming up, and one wonders if the dropping of the “Mother of all Bombs” in Syria delivered an unintentional challenge to the feminine. Perhaps a response has begun to vibrate under the radar: “Enough!”

This response can take an infinite number of forms, and they are visible in my incoming flow of emails. I have never seen such a flood of messages concerned not only about the possibility of a new war but also the need to act on issues like the environment, gun violence, justice, compassion, racism, freedom, truth, and civil rights as well as feminine equality. The ladies are really “up,” and I don’t think this is going away. It has to do with a shift in consciousness, and I will share a story that provides a vivid illustration.

Perhaps some of you remember this, but back in the 80s, a story about scientific research on the macaque monkey of Japan began to travel like wildfire. A British scientist named Lyall Watson had included an account in his 1979 book Lifetide.

To summarize, scientists studying the macaque on the island of Koshima in 1952 provided them with sweet potatoes to eat. A female monkey (wouldn’t you know it?) was soon observed washing the potato in a river, perhaps to clean it. Later she took it down to the shore to wash it in the ocean, presumably to flavor it with salt. Following her example, soon all the macaques on the island were washing their potatoes. And amazingly enough, the macaques on a neighboring island picked up the same habit.

Well, as it turned out, Dr. Watson’s account was basically hearsay. He plucked the number 100 out of the air to identify the critical monkey whose adoption of potato-washing reportedly caused the habit to travel via monkey collective consciousness. Nevertheless, the impact of the story was not lessened by these facts or the additional point that macaques are good swimmers. The sustained response was “Whether it happened or not, it’s true,” and it became known as “The Hundredth Monkey Phenomenon.”

The story became a popular illustration of how one more than a certain number of related incidents can lead to a kind of revolution in thinking or behavior. Another term for this is “reaching critical mass.” Ironically, this connects with the pending war issue I brought up in the beginning. In physics, critical mass is defined as “the minimum amount of fissile material needed to maintain a nuclear chain reaction.”

Now let’s also circle back to Mark Zuckerberg. In his speech, he remembered telling a friend at Harvard how excited he was to connect to the community. However, he went on to say that “one day someone would connect the whole world.” He was thinking about technology, of course, but through the collective unconscious, we are probably already connected to a degree.

My closing premise is that there are signs that the feminine is awakening in new and powerful ways, and like the Mother of all Bombs, this may travel. I mean via the media and community but also the collective unconscious. From my perspective here in Santa Fe–which I will go into next–it is indeed on the move.