A male mind is a wonderful thing, but it can lead us into error.

What if very advanced human civilizations existed thousands of years earlier than history teaches us? What if they were peaceful? What changed to make us so warlike?

A friend recently gave me a copy of a book called Deep Truth by Gregg Braden. A computer geologist and systems designer, Braden has, according to his book biography, become “internationally renowned as a pioneer in bridging science and spirituality.” His books, including Fractal Time, have been New York Times Bestsellers, and he travels all over the world to explore archaeological digs and spiritual sites, consolidating his impressions into messages of enlarged human possibility. The way his mind works is fascinating, outside the box and inside it at the same time–or so it seems to me. I bet I know how he votes.

He covers a lot of territory to arrive at six “scientific” deep truths intended to alter forever and for the better the way we think about ourselves. I will touch on just one with which I have issues. I should say at the outset that I have no credentials in science. In fact, every course except my biology class in high school was an academic sinkhole, so you can be skeptical of my perspective if you like.

I did really enjoy history in school and learned as we all did that civilization began some 5,000 years ago among the Sumerians in the northern territory of modern Iraq. Braden extends that history with the statement that an ice age ended about 12,000 years ago, which was followed by 4,000 years of rain, probably the biblical “flood.” Over the ensuing years, humans must have congregated in the area that became Sumer, developing cuneiform writing, the wheel, and the plow.

All of this is well and good, but in recent decades archaelogists have made a number of other discoveries of advanced civilizations that seem to have existed much earlier. Braden is saying that these have not yet made it into the textbooks, and so young people are learning inaccurate history. And there are mysteries afoot. Were these people our ancestors or some form of “Other,” and why did they disappear? Does their existence suggest that we have much larger potential than we imagine? Will archaeologists excavate reason for hope as they continue to dig?

The first of the four places mentioned in his book is in the Giza Plateau in Egypt. We all know about the Great Sphinx but thought it was around 4,500 years old. Now it has been determined that it is actually between 7,000 and 9,000 years old and was eroded by the 4,000-year flood. In Göbekli Tepe, Turkey, a ceremonial complex has been dated to 11,500 years ago, which would have been close to the end of the last ice age. Another ruin is in the Gulf of Khumbhat, India, 120 feet under the waters of the Indian Ocean. It was a huge city, extending two miles in one direction and five miles in another, and has been dated to 9,500 years ago. Then there is Caral, Peru, dated between 5,000 and 6,900 years ago. That makes it thousands of years older than the Mayan civilization.

Braden says that these discoveries create big problems for historians, and it is hard for us to imagine a people so sophisticated as well as ancient. He believes that these civilizations were wiped out by climate change and that we could be the next humans to have that experience. Further, he points out that these ruins have so far revealed none of the weapons or the defenses that suggest residents were ever a warlike people. His theory is that the extreme conditions created by global warming after the ice age made humans aggressive. 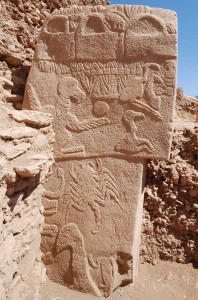 I see in this theory a male mind at work. A male mind is a wonderful thing, but it can lead us into error. My female mind noticed a coincidence. The art carved into stone at Göbekli Tepe is covered with insects and creatures and what could be plants. This reminds me of the art in the ruins of matriarchal civilization of the Minoans, where there was also no evidence of warlike activity. Hmmm.

And now let me cut to the conclusion of Braden’s book, a conclusion laden with hope for a peaceful future for humanity. This is a point emerging from Braden’s sixth and final deep truth: that our deepest instincts are to cooperate and nurture. He states it as follows: “We are nonviolent beings by nature, but can become violent when one of three conditions are met: we feel threatened, we feel that our families are threatened, or that we feel our way of life is threatened.”

As I read that, I wondered if the likes of Alexander the Great, Julius Caesar, and Francisco Coronado felt threatened. I don’t think so. I think something else was afoot, like maybe ambition, the pursuit of wealth, and an appetite for adventure and conquest. So if this was new, what changed? Why did the birdies and flowers disappear from art to be replaced by so many battle scenes and naked, muscled, male bodies?

Maybe the answer to that question is where hope really lies. I will leave with you with that possibility for the moment.

(See May 8, 2013 post on Amanda and the Feminine for a reference to the Minoan civilization.)