These weeks of focus on Islam brought me to a wondering: Is steadily more of humanity searching for spirituality beyond organized religion?

If we are moving toward a more secular world, the United States may set the pace. The PewResearch Center reports that the percentage of Christians among Americans has dropped by nearly eight percentage points in the last seven years. Over the same period of time, the number who are religiously unaffiliated has jumped more than six percentage points.

Clearly there is a trend afoot, and it may intensify as it becomes steadily more clear that religion is the most divisive force in the world today. At the moment, it also looks as though being labeled as Muslim may become as costly as it has been to be Jewish throughout history.

So as Americans begin to “check out,” so to speak, how will they address the human need for some form of spirituality? In light of all the trouble looming through climate change, is it possible that more and more of us will begin to reconnect with the natural world for a sense of belonging and in search of wisdom and guidance? Time in an unspoiled setting–attentive time–is no small thing. As Albert Einstein said, “Look deep into nature, and then you will understand everything better.”

Sometimes the natural world seems to intervene in human affairs in ways that seem both intelligent and purposeful. The agent is typically a stunning, seemingly significant, coincidence. The great psychiatrist Carl Jung termed this phenomenon a synchronicity. He witnessed the like many times, but his most famous account relates to a session with a very difficult patient.

Jung was getting nowhere with the young woman, armored by a very fine education, a rational mind, and the fact that “she always knew better about everything.” (This detail comes from Volume 8 of  The Collected Works of C.G. Jung). Jung had gotten to the point of hoping something unexpected would happen to burst the logjam.

He sat listening to her tell him a dream one day, his back to the window. 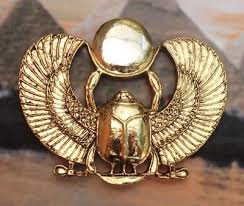 In the young woman’s elaborate account, someone gave her an expensive piece of jewelry that was a golden scarab. As Jung listened, he heard a tapping on the window. A large insect was trying to get into the dark room. Jung opened the window and grabbed it as it flew in. It was a common rose chafer, the nearest thing to a golden scarab. He handed the insect to his patient, saying, “Here is your scarab.”

This was a breakthrough moment for his patient, vanquishing her intellectual resistance and her “animus possession,” as Jung put it; and he was subsequently able to treat her successfully. Interestingly enough, in spite of her response, she did not fully understand the significance of the moment. However, Jung knew that the scarab is a classic rebirth and transformation symbol, familiar to him from Egyptian mythology.

In other words, the scarab is an archetypal symbol that lives in the collective unconscious. We may not recognize it as such, but its significance was fulfilled in the young woman’s ensuing progress. The insect, an emissary from the natural world, was intent on entering the dark room, which was odd. Had it come at her unconscious bidding? After all, she had gone into therapy on her own volition.

This very famous case study is the classic example of synchronicity, the meaningful coincidence. This is just me, but I believe that such occurs often in nature, something extraordinary manifesting in response to the seeking, attentive mind. I had such an experience about 20 years ago, and I feel comfortable describing it as both an initiation and a spiritual awakening.

3 Responses to “Divining outside the Box”