“The universe wants us to wake up and will happily guide us toward wakefulness.”

This statement seems to invoke guidance in the form of synchronicity, the topic of my last post. So who is Steve Taylor? And where is this post going?

First of all, I discovered Steve Taylor’s writing while doing research on the subject of consciousness. He is British, which endows him with a certain perspective. However, it has been broadened first by his PhD in psychology and then further by his special interest in transpersonal psychology, “which investigates higher states of consciousness and ‘awakening’ experiences.” (Wikipedia) He has written 11 books in this area, including The Leap, published in 2017, which is the focus of this post. He continues as a professor in psychology and has for years been known in Great Britain as one of the 100 most spiritually influential living people. I haven’t been indoctrinated in his views but certainly find them thought-provoking and worth sharing.

The subtitle of The Leap is “The Psychology of Spiritual Awakening.” And as he discusses the nature of awakening here, it becomes clear that Taylor sees it as the prelude to another evolutionary leap, which may be inevitable. After all, he says “[We] tend to forget that the human race as it presently is can’t be the end point of the evolutionary process.”

Great. I was kind of thinking maybe we are near the end, our species at risk for extinction like so many others. However, perhaps all the emerging ways in which our world seems to be in peril will be catalytic. As Eckhart Tolle, a German-born spiritual teacher and best-selling author, says in the foreword to Taylor’s book “Challenges are the lifeblood of all evolution.” Of course rising above them is key. It will be good to remember that individually and collectively going forward.

Taylor’s perspective spins to the past. He believes that early humans and indigenous people were naturally awake. He relates this to their sense of connection with the earth itself and all the life on it, plus an awareness of “the sentience and sacredness of natural phenomena.” Their communities were small and much less diversified than ours are today, and perhaps they enjoyed a sense of oneness without knowing what that meant or being able to see themselves as individuals.

After a while, however, there must have been among them those who did have a sense of self nurtured by ego. And as brains developed, some had latent potential that demanded development. Their numbers multiplied, and humanity advanced mightily, all the while distancing from the wakefulness of our earth-conscious ancestors and today’s indigenous people. Taylor compares that distancing to falling asleep, terming it “The Fall,” also the title of a book he wrote on the subject.

During The Fall, the world became inanimate to us. Taylor writes that “We no longer sensed the aliveness of rivers, rocks, and the earth itself.  We no longer sensed the sentience of trees and other plants, nor the consciousness of insects and other animals.” We felt free to use or abuse all the world’s resources, but our mobilized intellects created advances that are an ongoing, great source of pride. The Fall, a term we associate with decline, ironically resulted in an evolutionary leap. However, that leap began to be compromised by the rise of group identity.

THE THREAT OF GROUP IDENTITY

As humanity advanced, so did a sense of separation from the whole resulting in a degree of loneliness. According to Taylor, we developed a need for identity and belonging through membership in groups. These include nationality, religion, ethnicity, and political parties, but countless other groups also formed all the way from labor unions to college sororities. A sense of group identity seems to become increasingly important in America’s media-fractured culture where many may feel isolated and dis empowered in some way. 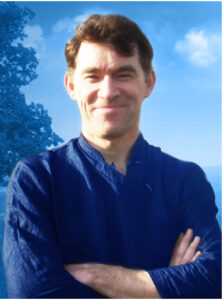 In an article in Psychology Today, Taylor says that being a member of a group “assuages the sense of separation.” He goes on to make the unsettling point that the sense of group identity “is strengthening by perceiving ourselves in opposition to other groups. To have rivals and enemies helps us to define ourselves more clearly and strongly.” This is a disturbing perspective, perhaps because we see in the moment that our nation is much more fragmented by group identity than united. If this is happening in many other countries, it certainly seems to defy the possibility of ever creating the sense of “oneness” idealized in my previous post.

And so we seem to have arrived at a moment in history when humanity is so fragmented that nothing can unite us. However Taylor would disagree. He believes, to the contrary, that we stand on the threshold of an evolutionary leap in wakefulness, and he has seen evidence of this not only in his research but as a consultant in psychology.

He says that it manifests first of all, in people in whom wakefulness has already expressed. These are individuals who find superficial or meaningless the distinctions imposed by group identity. They see themselves and others simply as human beings and treat all people equally. Next are individuals who have temporary awakening experiences while in a very inactive or relaxed state. In the next group are people who “seem to sense intuitively that something is wrong with their normal state of being, that it is limited and delusory.” They seek to transcend their normal state by following spiritual practices. In the last case, an individual may experience an awakening that occurs spontaneously as the result of psychological turmoil. Taylor says this last example has always been more common than we realized and is becoming still more so.

One cannot help but conclude that there is a fifth category of people who are ready to awaken out of curiosity and goodwill and will pursue ways of doing so. After all, Taylor says “it’s important that our own individual psyche is connected to–and influences–our species as a whole.”

Now let’s go back to the quote at the beginning about the universe being eager to see us awaken. The leap from earth consciousness to universe consciousness is huge. However, near the end of the book, Steve Taylor says that some contemporary philosophers have suggested that “the purpose of the brain may not be to generate consciousness but to act as a receiver and a channel for it.”

This brings to mind that Psychology Today article I mentioned earlier. In it Taylor quoted astronaut Rusty Schweikhart floating 160 miles above the earth in 1969. It was a transformational moment–an awakening–as he watched earth circling below. Schweikhart said “You look down there and you can’t imagine how many borders and boundaries you cross, again and again and again, and you don’t even see them. . . [F]rom where you see it, the thing is a whole, the earth is a whole, and it’s so beautiful. You wish you could take a person in each hand, one from each side in the various conflicts, and say, ‘Look. Look at it from this perspective. Look at that. What’s important?'”

Perhaps the astronaut had suddenly become a channel for the consciousness of the universe. Perhaps that moment was a glimpse of the next evolutionary leap–into a state of oneness with the universe.

4 Responses to “Does Another Leap Loom?”