“Be fruitful, and multiply, and replenish the earth, and subdue it.” Genesis 1:28

These are confusing instructions at the best of times, but especially so in the moment, especially that command to “subdue” the earth.

As though advancing on the US hand in hand, the intent of hurricanes Harvey and Irma seems to have been to put us in touch with the truth of things: We are nowhere near subduing Earth. Also, it was fully stocked from the beginning and needs to be replenished only now. And further, going forth and multiplying to the degree we have is clearly perilous. Now what about the closing line giving us dominion “over every living thing”? Isn’t it time to pause and consider how we have screwed up while operating under that assumption?

I can say this even though I haven’t led in any of the initiatives that have brought us to this pass. Instead, I like Irma, have held to the gender-correct position a little behind and to the right of Harvey. However, that trailing perspective has recently expanded due to several developments.

First, let’s look at a study published in July in the Proceedings of the National Academy of Sciences. This research put us on notice, in an unprecedentedly blunt way, about the degree to which we have failed in the exercise of dominion. The authors (Gerardo Ceballos, Paul R. Ehrlich, and Rodolfo Dirzo) confirm that we are well into Earth’s sixth mass extinction. To raise the alarm, they also assert that “biological annihilation” is underway.

This conclusion is based on a study of 27,600 vertebrate species, and the scientists summarize as follows: “Dwindling population sizes and range shrinkages amount to a massive anthropogenic erosion of biodiversity and of the ecosystem services essential to civilization.” Doom, in other words.

At the same time, we are facing this “Here we go again cycle.” I’m referring to the looming possibility of yet another war, this time with nuclear weapons on several fronts. The primary hot spot seems to be all the missile tests ordered by Kim Jong-Un in North Korea–14 so far this year, as compared with six in 2016 and one each in 2013-2015. He must have something in mind–doom somewhere, no doubt.

Of course people are working on countless fronts to try to prevent humanity from destroying itself. As I’ve written before, there is an unprecedented amount of activity representing the feminine rising in reaction to the way things are. These activities include a huge surge toward running for public office. This is extremely important, but I think it reflects the deduction that it will be a very long time before a feminine president will become the agent of change. Americans want a leader who is powerful, bold, and even ruthless when necessary. These are adjectives that are admired in the masculine; they render the feminine “monstrous.” Never mind. We have other ways.

And my friend Elizabeth Robechek recently introduced me to a course of study that gives me a new kind of hope. Elizabeth is a landscape architect who has a special relationship with the land–spiritual, intellectual, emotional, and physical–that was common among women in many regions of the Earth in pre-biblical times.

The course of study is offered online through The Hedge School in Connemara, Ireland, established by Dr. Sharon Blackie. A successful writer of both fiction and nonfiction. Dr. Blackie is also a psychologist and mythologist. Her goal is to explore the relevance of the native myths, fairy tales and Celtic folk traditions to the personal, social and environmental problems we face today. Very timely, don’t you think?

I chose her series of classes on “Reclaiming the Wise Woman,” and the materials are transmitted just before each New Moon every month for a year. I’m now in my third month of studies and am finding the stories fascinating and thought-provoking. And how amazing it is to discover the special status that women who had a wealth of knowledge about the natural world enjoyed in pre-Catholic Ireland. Afterward, of course, came the witch trials. 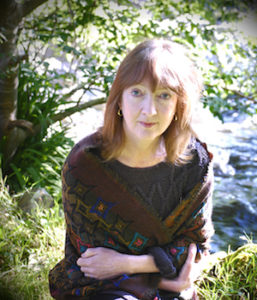 Blackie explains her initiative with these courses as follows: “As the state of the biosphere grows ever more perilous and contemporary culture becomes ever more alienated from the natural world, I believe it is the job of women to bring us back into right relationship with the land.” In the deep past of Ireland, they were known as its “guardians and protectors.” Blackie also  believes that this is the foremost way to establish balance between the sexes that will enable both civilization and the natural world to endure.

In her memoir, If Women Rose Rooted, she points out that masculine qualities are not a problem in themselves. The problem is that they have become dominant and when not balanced with “appropriate feminine qualities, they can become pathological.” We have been there before; it feels close again.

Actually, I am kind of hoping that Earth herself will continue to distract the most dangerous world leaders from the threats, bluster, bullying, and showing off that daily raise the risk of war. She may do this through increasingly dangerous climatic events and circumstances that move simple survival into the position of highest priority. This morning I woke up wondering if one of those huge nuclear bombs Kim Jong-Un sets off underground–the one on September 3 equivalent to a magnitude 6.1 earthquake–could set off a real earthquake. The Law of Unintended Consequences, you know.

Anyway, I hope that the feminine will rise fast enough to bring the sixth great extinction to a healthy close and soon make war obsolete. This would be a different route from the one prescribed by the Bible; but over the long run, a reverence for balance may prove infinitely wiser than the drive to dominate.

P.S. And for those intrigued by the idea of “reclaiming the wise woman,” there is an award-winning novel that may take you deeper into enchantment. Written by British author Susan Fletcher, it is about a child-like, Irish “witch” of about 1690. The title is Witch Light.

2 Responses to “Dominion? Time to Rethink”