This is serious. This is about saving the human species.

How odd that the takeaway from a brilliant book on human evolution is the urgent need to change our shopping habits. I am referring to The Story of the Human Body by Daniel E. Lieberman, professor of Human Evolutionary Biology at Harvard. When I began reading, I had no idea that I would finish just in time for New Year’s resolutions. Another synchronicity. 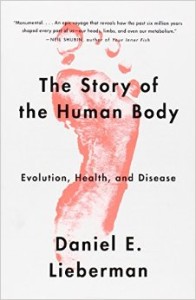 About the first 200 pages of this book trace the origins of the human body over approximately six million years. The slow, slow advance is soothing to the reader hurtling through a time of exponential change. And then about 1.9 million years ago came the thousands of years over which our ancestors began to rise from knuckles onto two feet, the back straightening as the eyes studied the horizon, the long fingers flexing with possibilities. This was Homo erectus.

Now the pace of the story picks up. Over the next 1.7 million years or so, these hunter gatherers spread over three continents, surviving on edible leaves, roots, fruits, berries, nuts, tubers, and game. Their diet was fibrous and tough, and they spent virtually all day chewing it, building powerful jaws and strong teeth in the process.

About 200,000 years ago, Homo sapiens, the modern human, emerged in Africa; and about 12,000 years ago, some began to transition into farming. This sounds like a good thing, providing stable sources of food, but that was not true in the beginning. Lieberman points out that the early farmers had to work very hard, their diet was limited to a few crops, they were vulnerable to famine, and they were exposed to disease through close contact with their own waste and that of the animals they began to domesticate. Fossils indicate that they diminished in stature and began to suffer from tooth decay.

Now we leap over thousands of years and the recorded history of civilization, including the Agricultural Revolution and the Industrial Revolution. Comparatively speaking, the latter were some micro-second ago of the six-million-year span. Now we are in a modern American grocery store. Among the aisles we find every fibrous form of produce and every kind of meat that our ancestors ever foraged, hunted, or domesticated. Not to be too dramatic, this is where our story could end.

There are two major sources of risk. One is that the capitalists who have basically made this abundance possible have become as dangerous as predators lurking in prehistoric bushes. They tempt us with foods loaded with fat, sugar, salt, and carbohydrates processed in easy-eat packages that tempt us to consume quantities vastly exceeding our energy needs.

This relates to the second risk, the fact that we have cultivated “pathologically abnormal conditions of low activity,” as Lieberman puts it. Although we have inherited bodies that were built to run, walk, climb, dig, and carry virtually all day, they now lie or sit rather dormant during much of it. This has happened too fast for our physiology to adapt, and we are getting fat and physically inept–many of us anyway. A collective sense of sheepishness stirs. 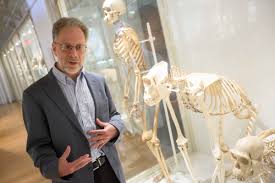 To make matters worse, our bodies are responding by creating disorders that our primitive ancestors probably did not suffer–and not because of shorter lives. Lieberman refers to them as “mismatch” diseases. The obvious ones are diabetes 2, heart disease, cancer, and osteoporosis, but he lists 45 other possibilities. These include things like flat feet, depression, Alzheimer’s, lower back pain, fibromyalgia, and attention deficit hyperactivity disorder.

And here’s the bottom line according to Lieberman: The United States spends about two trillion dollars a year on health care, and as the population becomes steadily more unhealthy due to our shopping habits and inactivity, that figure–nearly 20% of GDP–will continue to rise. Not, however, if we resolve to invest in health through better diets and more exercise. After all, an estimated 70% of the diseases that cost a fortune in taxes, insurance premiums, and out-of-pocket expenses are preventable.

Among the early pages of his book, Lieberman inserted findings about Homo that seem oracular at this remove. Apparently, we differ from most mammals in that our brains and gastrointestinal tracts (when empty) are similarly large. In the case of other mammals of similar body mass, the brain is about a fifth the size of the human’s and the guts are twice as large. “In other words,” Lieberman writes, “humans have relatively small guts and big brains.”

Hmm. This seems to have served us well over millions of years, but that was before our taste buds took over. The proportions seem to be changing. This isn’t good. It’s time we went on high alert.

So let’s imagine a new scenario. The stars are those awakened members of the species who will ensure its survival. We see one enter the grocery store with a thoughtful list in hand, her face fierce, the eyes piercing, all senses alert to danger. She grabs a cart and sets off, invoking the wisdom of the ancient gatherers from whom she has descended. “Let’s roll,” she says softly.