The quoted statement above was my own, an idea I voiced with my brother about the tragic incident in our hometown. Almost immediately, I regretted my comment. It is a ticket for the fear train, and I believe we can avoid that ride if we focus on the truth of things. First, we need to consider the way that the media, both printed and online, are stampeding us right and left, pardon the pun, toward social dysfunction.

MONEY AT THE HEART OF THE MATTER

Is this deliberate, and why are they doing it? I don’t think it’s calculated; it’s just the way the media have evolved. In America, the drive to make money can undermine social responsibility. One could run with that thesis forever, but the fact is that violence does make money for the media.

By maximizing coverage, the printed media increase sales, and that in turn serves to increase revenue from ads as well. Nevertheless, circulation of the US daily newspapers is in decline due to competition from digital sources of news, which also benefit from ad revenue.

Through the use of algorithms, the social media have learned how to “hack our attention.” They do it with sensational headlines and other techniques that create what tech ethicist Tristan Harris calls “a race to the bottom of the brain stem.”

In his wonderful research titled “This is How Your Fear and Outrage Are Being Sold for Profit,” Tobias Rose-Stockwell included a graph showing how by 2017, The New York Times, had increased coverage of terrorism relative to all other topics. So get ready. Alarming content is going to be coming at us from everywhere, both print and digital. We need to be aware of how this trend will distort the truth and give us a very bleak view of reality.

As we go forward, here are some important things to keep in mind:

As a result of the recent massacres, the news we choose to consume could turn us into a fear-riven nation. However, when we stop to think about it, we probably realize that the chance that we or anyone we know will ever be a victim of a massacre is virtually nil. As a result, we can choose not to worry about that. And here is an illustration of why.

As you have probably already heard many times, in America since 1982 there have been 114 mass shootings (defined as the murder of three or more people in one attack). So that’s over 17 years. In 61 cases, well over a majority, white men were the attackers. Now let’s imaginatively go anywhere in the United States and look around. There are white men everywhere!  Are we afraid of them? Well, no.

Now let’s look at a quote from a “manifesto” the murderer Patrick Crusius wrote prior to leaving Allen, Texas, for El Paso. I received a copy by email and studied it carefully, but it has disappeared online, possibly pulled by authorities. Snopes says that it had been edited by others since the massacre, so there is no way to know which words are Patrick’s only. However, the idea that he was trying to save Texas from the “Hispanic invasion” does seem to be his. So, are we afraid of Hispanics?

Not really. We’re more worried about them than afraid of them, including up here in New Mexico. But take a look at the chart of mass shootings in the US created by Statista, a German online portal for statistics. It provides details on the race and ethnicity of shooters between 1982 and 2019.  It’s visually very striking, isn’t it? I mean that really tall “White” column. Now look at the little short “Latino” column.

To clarify, Latinos are technically people who are from or are descended from people from Latin America. Hispanics are people who speak Spanish and/or are descended from Spanish-speaking populations. For the moment, let’s think of Latinos as Latino/Hispanic. As you see, there were only 10 Latino mass murderers over the 17 years compared to 64 whites, including three women. So, from that point of view, a larger percentage of Latino/Hispanic men would make us a safer culture–safer than if we were all white.

Patrick would not agree with that because of the interbreeding that would result. In the  manifesto I saw, he expressed opposition to “race mixing because it destroys genetic diversity.” The italics are mine, but his statement illustrates the quality of his thinking. For those who are radically anti-immigrant, this chart suggests that America would be a safer place if we actually did more interbreeding. 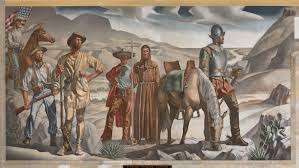 Patrick is clearly an addled young man, probably something of a misfit who habituated sites that nurtured his prejudices and helped him cultivate delusions of grandeur. The last statement in the manifesto I saw sounds authentic: “I am honored to head the fight to reclaim my country from destruction.” Through media coverage of his crime, he stepped into a brilliant spotlight. In the minds of some, the attention he has been given may legitimize him as a leader.

Patrick also said that America is “rotting from the inside out.” As we begin to watch more carefully what is actually going on, we may, in fact, begin to pick up the stench of decaying ethics in media coverage that is serving to create fear and discord.

We are, indeed, in a bit of a mess. However, because Patrick has lived to deliver testimony on his profoundly flawed thinking, the massacre in El Paso may serve to lift the entire nation to higher ground. El Paso could become El Paso de la Verdad, like the way to the truth.

In our heart of hearts, we know that the effectiveness of democracy depends on the ability to reach consensus that the majority will respect. Nevertheless, on both sides, even the most enlightened among us have probably been thinking: “The important thing is to win the next election. We’ll work on consensus after we do.”

Instead, why don’t we pause for a moment and listen to a voice representing something like the Higher Self: “How many of us would like to see the end of mass murders in America? Please raise your hands.”

“Everybody? Good. Let’s get to work.”