The elephant is associated with spiritual justice.

A photograph on the cover page of the Sunday Review of The New York Times was really a tough way to start the day.

There was an image of two juvenile elephants at play, and one had draped its trunk over the other in a display of affection. Attached was the lead to the article within: “An intelligent animal, decimated for trinkets.” Oh, no. More on the tragic poaching of these magnificent creatures.

We all know the story by now, which was summarized in the article “Slaughter of the African Elephants” by two conservation scientists. Growing affluence in China and the rest of Asia has driven demand for status carvings of ivory, a trend that threatens elephants with extinction. 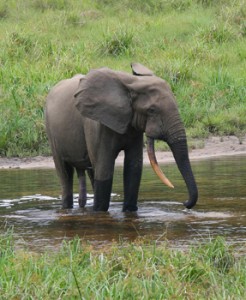 I had written earlier (“Mourning Elephants” on August 2, 2012) about this highly intelligent, sensitive, and social animal. The females are exceptional mothers, and they all nurture the ill and injured and grieve over loss. My earlier post was about two herds that set out unbidden on a 12-hour march to honor the conservationist who had rescued them.

This new article by Samantha Strindberg and Fiona Maisels also points out how elephants benefit the environment, scattering seeds everywhere they go and fertilizing them with their own dung. In areas where they are being heavily poached, however, their range is shrinking. The fearful and depressed animals confine themselves to fewer acres where they lack the food, water, and minerals to remain healthy. The scientists report that 62 percent have disappeared in central Africa over less than ten years.

The elephant has a special place in the American imagination. It is, after all, the largest creature walking this earth, and many of us have been awestruck by the sight in a zoo, a circus, or a parade. And then there is Dumbo. Now a horror has invaded our pleasant associations. The thought of tusks being sawed off while a wounded creature is still alive has no place in our collective psyche.

There was other disturbing news about extinctions last week. The monarch butterfly is imperiled by global warming. Bees, which pollinate 71 of the 100 crops that provide 90 percent of the world’s food, are continuing mysteriously to die out, possibly due in part to pesticides.

I track this kind of news, and recently I have had a vision of what planet Earth will look like if our species survives and multiplies much longer. From out in space, it will resemble a prune, dark and dry and absent any life form except mold, its puckered surface the product of massive pillaging of the water, fossil fuels, minerals, and metals underground.

It is ironic that the human species is so intelligent and yet so unwise, unaware, and even profoundly stupid in many ways. One day I challenged myself: Name one landscape, one other creature, any ecological system at all that has benefited from our presence.

If anybody comes up with one, please send it to me. My audit didn’t reveal even a single predator that we have been generous enough to sustain with our own bodies.

Hope rises through the blessed efforts of a growing population of passionate conservationists, but I find comfort in another source as well. I am referring to a little book by naturalist and mystic Ted Andrews called The Animal Wise Tarot. It’s about the symbolism the human intellect has attached to specific creatures.

We’ve all heard that elephants never forget but probably don’t know where it came from. It has apparently been documented that an elephant remembers someone who has injured it and may seek revenge. Andrews explains that it is thus associated with spiritual laws of justice. He concludes by saying that when elephant appears for us, justice will soon follow.

That should send a shiver up every spine. As a species we are not awakening fast enough to the need to mitigate all the harm we are doing to our host planet. Scientists have identified consequences, but it’s a long view and can’t anticipate every factor. What if the tipping point is much nearer than we deny or imagine? And the plight of the elephant is very high profile right now, which should give us pause.

When the havoc of global warming begins in earnest, it will be a reassuring reminder to some of us that there is order in the Universe and consequence is its agent. Let us hope that our species will learn and grow from the outworking of justice heralded by the elephant.