I made a mistake. I just hate making mistakes.

Now, what was the mistake?

In my last post, I provided statistics about the number of mass shootings from 1982 to 2019. I referred to a span of 17 years. Thanks to my friend, Robert, I now know that the span is actually 37 years. But there is afoot an even larger error issue.

By private email and site comments on my blog, a huge difference of opinion emerged about the number of mass shootings happening in America. I had cited Statista, a German online portal for statistics, as reporting that there had been 114 mass shootings here since 1982. Some readers fired back, “Wrong! There have been over 200 just this year!” They named CBS as one source, but there are many.

I’m not a math person; I am a word person. And clearly, the problem lies in the definition of what a mass shooting is. In this moment, lack of clarity is inspiring new conflicts.

Thank goodness for Snopes, a respected fact-checking site. I think it did a nice job of explaining its conclusion and how it was reached. It matched what I had written, and here is the summary:

So how did other sources come up with that huge number? I don’t think for a minute that this will lay the issue to rest, and I really hope the government will move to clearly define a specific term so that universally accepted figures can be discussed.

Nevertheless, we have a very high and probably growing level of home-grown violence that includes guns. And since guns in general inspire such protective passion in so many, why don’t we focus in the moment on the most dangerous ones in civilian possession? I was thinking of the AR-15 and the AK-47. I hear those terms a lot. I thought that was about all there was. Boy, was I naïve!

I was educated as far as I want to go by Field and Stream magazine and an article by Richard Mann, a very fine writer, which was updated this March. The title is “The 30 Best AR-Style Rifles for Hunting and Personal Defense.” Questions immediately came to mind:

When time and again this type of weapon is used by a demented young man intending to slaughter the largest number of people possible, it seems important to look at the imaginative associations with it. I searched for the telling imagery in Mann’s article. He has three sections: Game Hunting, Varmint Hunting, and Personal Defense.

THE WORLD OF ARMED FANTASY

Now to game hunting. And the first thing that came to me as I read was that guys who use these weapons must not be very good marksmen. Have I turned you off already? But to the imagery.

First of all, there is a manufacturer called “Savage Arms.” Doesn’t that thrill you? Or how about the Wilson Combat Ultralight Hunter? It’s for killing non-dangerous big-game animals, poor things. When chambered with something-or-other it becomes a “dinosaur killer.” Cool. For that enraged bull elephant, the Big Horn Armory’s AR500 would be best. It “roars at the muzzle and bites at the butt-stock.” Cool again.

The next section is on varmint-hunting. This includes feral hogs, rats at the dump (Ooh, dump hunting), squirrels in the trees (but they’re charming!), and prairie dogs (some of us feed them here in Santa Fe). For destroying these creatures and mowing down the nevertheless invincible coyote as well, there is the Smith & Wesson Performance Center M&P 15-22 blah, blah.

As the potential shopper goes on, the language becomes more evocative. He reads about “screaming bullets”, billet-machined receivers that “you’ll swear DaVinci designed”, recoil “as pleasant as a wet kiss”, and a rifle so perfect in design that “you’ll swear its name is Excalibur.” 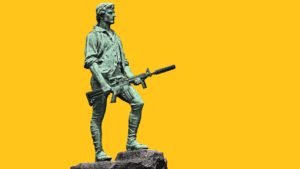 Now on to the rifles for personal defense. Here again we have the Wilson Combat label (see above) on a pistol referred to as a “demon” to cut lose to defend your home. Then we have the statement “If you’re measuring wickedness in the world of AR-15s, the CMMG  Banshee 300 has to rank near the top of the list.” It is a “less-than-two-foot-long bundle of viciousness.”  Wow.

And “if the Russians invade America or brown bears take over your back 40, with the P-308 Edge, you’ll own the fight.” And how likely is this?

Finally, Mann brings the reader to the Spikes Tactical Billet ST Compressor. (I hope you’re taking notes). He writes that “Everything about the compressor screams, ‘I’m ready for villains, demons, vampires, and werewolves.’ If you want to defend your castle, or carry around the most badass truck gun made, this is the one for you.”

As I read this article, it was like entering an alternate reality, something I didn’t even know was there. It does add to the context, though, in trying to understand why we have so much gun violence in this country.

Focusing on this kind of weaponry brings up that “Do something!” demand. The most obvious response would be to restore the ban on purchasing some of the firearms in this category. For those panic-stricken about how this might interfere with the rights of would-be mass shooters, consider this. At a moment in history when it would be great to unite on something, such a ban would be basically a national expression of dismay and compassion for victims of mass shootings. If the ban were for ten years, it would just give us that much time to think about how to address the infinitely more complicated challenge of mitigating gun violence in general.

The image of the statue above very clearly illustrates the imaginative connection between heroism and guns. And we do need our men to be heroes. But what rises on the horizon are not the fanciful dangers mentioned in Richard Mann’s article. The real danger is the possibility of mass extinction due to the damage we have done and are doing to our environment. And to borrow a metaphor from Mann, if our men don’t mobilize all their engineering skills and creativity and courage to address this problem, finding a magnificent, trophy bull elk to shoot is going to be “as hard as finding unicorn poop.”

So, let’s go for that ban. It’s a gesture, and gun manufacturers will do just fine as they did during the previous ban. This will simply buy us the time we need for the truth to roll in so that we can take aim at the real peril we face.