When you think about it, the human body is actually a little funny-looking.

This perspective on our unusual selves is the result of recent exploration of deep history, which seems appropriate at this troubled time.

There are some large anxieties afoot, you know. I’m thinking about the possibility of nuclear war, the consequences of climate change, and the widely held belief that the sixth great extinction is upon us. It seems that the human species is at risk, so maybe it’s time to review our journey to this threshold.

The funny thing about us among mammals is our patches of hair on an otherwise naked body. We are odd in that we are neither hirsute nor totally bald like the elephant, rhinoceros, and whale. Just think of it. We have a tuft on the head, in the armpits, and between the legs. And of course men have beards. Everywhere else is pretty much bare skin. Oh, I forgot about the naked walrus. It has a beard tuft. 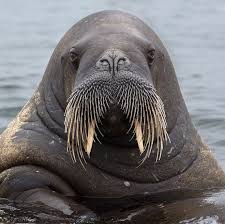 We were pretty furry when our path diverged from from that of chimpanzees and bonobos, with whom we shared a common ancestor. This occurred between 13 and six million years ago, quite a range. Our hairless state is believed to have developed about 1.6 million years ago, along with all-over glands that produce watery sweat to keep the body cool in a warmer climate and with increased activity.

The increased activity must have been due in part because we were now walking and running on two feet, which scientists estimate began between three and six million years ago. There is apparently no consensus about why that happened. It takes less energy to cover great distances on two feet than all fours, but no one knows why we came down from the trees to try that. The backbone has since suffered from forced uprightness, which has resulted in strained backs, slipped disks, arthritis, etc.

Maybe nakedness stimulated brain growth because it forced early humans to figure out how to protect themselves with hides and shelters and weapons. And when they learned to hunt, a diet rich in protein served further to increase brain size–from that of an orange to a cantaloupe, as one scientist put it.

Evolutionary psychologists theorize that the formation of complex social groups also stimulated brain growth. Humans learned how to plan and cooperate and manage and created language in order to share knowledge.

So, where am I going with this? Well, I think the development of our large brains is of much more timely interest than the loss of hair. I guess the bottom line is the question, “Will our use of those large brains soon make it too hot to survive on this planet?”

I mean, if we’re standing on the threshold of extinction, largely due to our own actions, where did we go wrong on this thirteen-million-year journey? Would any one thing foregone have given us a few million more years? What if we hadn’t used our big brains to invent money? Discover nuclear fusion? Create chemical fertilizer? Build the first computer?

Daily more word seems to be coming in that technology may curtail further brain growth–even work to diminish it. A new thing called “electronic screen syndrome” has been identified in young children who are over-exposed to technology, and the result is impaired brain function and structure.

Gray matter is atrophying in the brain in areas that affect the ability to plan, set priorities, and develop empathy and compassion. A loss of integrity in white matter is also resulting in breakdown of communication within the brain. In addition, young people are reportedly losing the social and communication skills that figured so importantly in primitive brain development.

And is it my imagination or are people not as smart as we used to be? Technology is sparing us the need to think in so many ways, so the “Use it or lose it” concept is up.  One can’t help but wonder also about our growing obesity problem. An active brain uses a tremendous amount of energy, but if you’re not using it aggressively, spending a lot of time being technologically entertained–well, you get the picture. And the heavier we get, the funnier we look.

The perils of the moment are many, but the possibility that humanity is devolving, so to speak, is the scariest one. And theoretical physicist Stephen Hawking has warned that, at least in part because of the rate at which we are devouring the planet’s resources, we will need to move to another planet within 1,000 years if our species is to survive. This is if artificial intelligence doesn’t take over in the meantime and render us null and void.

So as we pause to review the journey of humanity to this point, is it time to get a grip, let’s say? Do we really want to count on evacuating a few stellar–presumably–members of our species to seed another planet, or do we want to focus on a strategy that will enable us to stay here? What would it take to restore as much of Earth’s beauty and hospitality as we can?  What would it take to get our species in balance with all the others so that we might possibly endure for 56 million years like the horse has done?

In our current state of unconsciousness, we could continue to devolve. On the other hand, we could decide that we have unfinished business with human potential. I’m thinking of good potential, of course, of working toward a higher form of human life. If so, what would that look like? Shouldn’t we be thinking about that? At a rather depressing moment in history, it sounds like an inspiring and exciting undertaking.

But maybe that’s because I’m losing hair as I age. Maybe the ventilation stimulates this kind of  imagination–in which case all the boomers could help humanity avoid a bust.