There are many cavemen in my family tree.

Does that metaphor work? Maybe not, so let me back up. This post will be a discussion of politics–a philosophical discussion not a diatribe–and I will be bringing in personal information to illustrate. Let me say at the outset that the discussion was inspired by commentary that appeared last week in The New York Times, admittedly a liberal publication, about the appeal of the Republican Party to “real men.”

The title of the piece by Charles M. Blow was “The Masculine Mistake,” meaning that the Republican Party will regret framing itself in a macho way. Blow’s idea is that the country is evolving toward the concept of equality among all citizens. It will be disastrous, he thinks, for the Republican Party to turn into “a man cave of cavemen and the women who can abide them.”

So here is where this turns personal. The cavemen in my family include my brother, who lives in Texas, and cousins who live in Louisiana, Alabama, and Mississippi. All very intelligent and well-educated, they are passionate and articulate conservatives. My brother has three sisters, and one cousin has two, an important point for later. We have a very lively email debate going on among us all, including occasionally a caveman wife.

As you might imagine, the Southerners are ideologically rather uniform. My branch of the family moved from Louisiana to Texas when I was pre-school, and the conservative orientation remained pure only in my brother. So how did only brother remain a committed Republican among the four siblings? Blow cites a recent study by Stanford Graduate School of Business and Loyola Marymount University that professes to explain it.

The study is quoted as saying that “Watching their sisters do the chores ‘teaches’ boys that housework is simply women’s work, and that leads to a traditional view of gender roles–a position linked to a predilection for Republican politics.” You know, “Me big dude; you silly little woman with scary libido.”

This is one of those situations when academia strays, I think. I find it very hard to believe that watching my sisters and me slave over a hot wood stove and wash clothes in the creek turned my brother into a  right-wing conservative. (One conservative cousin also has two sisters.) So how did this happen? And in the answer lies hope for greater political accord.

I am naturally the point person on this, since I am the member of the family who seems to be most politically fluid. (Does that sound all right?) I emerged into adulthood as a Republican, probably because my parents were so positioned. My father died young, however, and so we were from our teens onward missing the male presence that traditionally dominates political discussion and sets an orientation.

Early on, I worked on Capitol Hill, moving around rapidly. I had jobs with two members of the House, a Republican and a Democrat; a Republican member of the Senate (John Tower); and also served on the Senate Republican Policy Committee. Everybody was on the moderate side, and all of it was pretty comfortable. 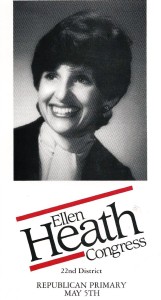 When I moved to Houston, however, I got uncomfortable with Representative Ron Paul. A Libertarian, he was such an outlier in Congress that I thought he was wasting a seat. So I decided in 1984 to run against him. Very naïve, of course, and when he decided to run for the Senate, there were suddenly seven of us in the race.

One was Tom DeLay, a state representative, and he won. I came in third as I remember, and perhaps the country would have been better off with me. DeLay ascended to the position of House majority leader and gained the nickname “The Hammer.” The Hammer ended up in the slammer for his role in a scheme to illegally funnel corporate money to Texas candidates. Maybe I would have turned into a jerk too, though. Congress changes people and not necessarily for the better.

I saw the Republican Party’s clear drift rightward during my campaign. I was booed by feminists for refusing to support the Equal Rights Amendment, which I thought was a waste of time. The religious conservatives were alienated by my refusal to take a stand against abortion, which I thought should be a private matter. I was a campaign manager’s nightmare, but since that was me, there was no infighting.

When the election was over, I continued to think of myself as a Republican for years. I would probably have voted for George Bush in 2000 if I hadn’t been displaced by a family emergency at election time. I watched him carefully after that, however, and soon  realized that he was departing from the moderate position he had claimed. From the war in Iraq onward, I was kind of a citizen without a party.

In fact, if there were such a thing as the Referee Party, that’s the one I would join. In my own mind, I have played that role in the sometimes heated family emails. They have given me a good look at my Southern roots and so did about four years in Tennessee and Alabama in a very mobile life. It was in Alabama one day that I experienced a moment of illumination; namely, that if my life had been different, I would probably be a right-winger too.

If my parents hadn’t moved us out of the South early on, if I hadn’t grown up in the West and gone to college even farther west, if marriage hadn’t introduced me to a more liberal perspective, and if I hadn’t turned into a tree-hugger when Republicans are mostly into logging, the story would have turned out differently. And most specifically, if I had stayed in the South, been educated there, married a Southerner, and lived there my entire life, I would no doubt have become a political carbon copy of my Southern cousins. At family barbecues, I would probably be responding “Yeah, yeah, yeah” to everything the cavemen said.

That is a realization that gives one pause. We don’t come into the world with genes loaded with a certain ideology. Our views are largely formed by environment and familial influence. They may deny it, but my brother and Southern cousins, if by birth or by choice, had ended up in California like my liberal older sister, they would probably be arguing for the Democratic platform with as much intensity and eloquence as they now promote the Republican.

There is no such thing as The Truth in this matter. We all find a comfortable place on the broad spectrum of perspective, but that need not be a fixed position. I find that I most often yield to the cousin who is a professor of economics. I got a “C” in that in college and sometimes don’t understand what he is saying. I think, however, that the term should become “economic philosophy,” because brilliance does not by a long shot produce agreement among all economists.

Anyway, if we can all  just get it, that we are imprinted with a certain perspective kind of like a baby duck that thinks a human is mother, there is tremendous ground for civil discourse. All we have to remember is that “But for the matter of chance, there go I.” Who would Rand Paul be, after all, but for Ron Paul?

So I agree that the Republican party is heading down the wrong road beating the drum for “real men.” (And by the way, the caveman wives and my female Southern cousins are not the least bit timid.) The country will end up with the simplistic idea that we have the macho conservatives on one side, dealing with an ever-present sense of danger with semiautomatics on the hip. Then on the other would be the limp-wristed liberals, ready to face whatever with just their fists. It doesn’t work, does it? I think Charles M. Blow is right. This strategy could backfire, pardon the pun.

4 Responses to “Exploring the Cavemen”