Ah, so women in the military will soon be allowed to serve in combat. This is an advance, right?

I must be careful about how I comment, because I am genuinely awed by women who would like to serve in this way. One of the articles I read referred to “female veteran activists,” so the push for this opportunity is coming from experience, not naiveté. I think so anyway. Maybe you never really know what combat is like until you’ve been there.

And do we really know how this will play out? Government seems to shift moment-to-moment, so I would like to pause here and take a look at an unanticipated consequence. 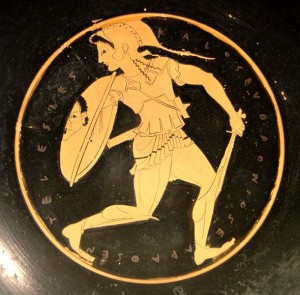 The mind travels to those Greek myths about the Amazons, the warrior women who fought with bow, spear, and axe. They supposedly perpetuated their race by mating annually with men in neighboring tribes and with handsome slaves whom they would subsequently kill. Male children were killed; females were nurtured and trained to be warriors as well. (Please compare detail with yesterday’s post.)

The fables are widely assumed to have been developed to comfort women angered by repression and their low status in society, but the stories never went so far as a victory over the men. Perhaps there is unfinished business in this regard.

But back to combat duty for females. Maybe combat camaraderie will transmute a long history of discrimination and sexual assault that has only recently been acknowledged. We can always hope that war will be elevating rather than brutalizing.

However, if women are going to experience combat, they will also experience the horrors that produce PTSD. And we will also have the likelihood of women suffering PTSD cycling into PMS.

I’m sure you instantly register the danger, but it’s even more complicated, according to Christiane Northrup, M.D., author of Women’s Bodies, Women’s Wisdom. She introduced a revolutionary take on PMS. She described it as a hormonally inspired phase in which truths denied and injustices ignored loom large.

PMS thus becomes an opportunity to get in touch with one’s true nature. However, if one is a warrior type to begin with, one who has experienced indignities at the hands of male peers in the military, who is suffering from PTSD, who is expert in the use of military weaponry, who has ready access to assault weapons and who is, on top of everything else, experiencing the enraging clarity of PMS­–well, do you see where I’m going?

This could be contagious, you know. How many women are there out there who have been sexually abused as children, who are experiencing domestic abuse, who are working to support a family because hubby can’t find a job, who are getting paid less than a man for the same work, who are being disrespected by their adolescent sons, and who are being talked down to by men at church, work, and in Congress? Imagine that they suddenly hear about a returning veteran, a warrior woman, the modern equivalent of the fabled Amazon, mowing down a row of men at a football game. And what if they know about the AR15 in the closet that hubby takes to the firing range to release his frustrated aggression?

Hmmmm. I mean, the NRA has gone to great pains to make men afraid that the government is going to take over. What about all the fed-up women, eh? This myth of the Amazon is ancient, but ask anyone what an Amazon is, and they know. We also know the ways in which the feminine has been demonized: Medusa, Medea, Scylla, the Sirens, Circe, Eve, and on and on. Ah, fear of the feminine has deep roots in the masculine, and combat duty may, indeed, open Pandora’s box and verify all the nightmares.

Heh, heh, heh. Perhaps the leaders of the NRA need to pause a moment and rethink their opposition to outlawing assault weapons. It’s about thinking ahead, you know, getting in touch with where real danger lies, not an imaginary danger that will benefit arms manufacturers. No, the real danger is that the Amazon myth lives on in the feminine psyche, as does a dream of victory over repression. Be afraid, gentlemen. Be very, very afraid.

One Response to “Fertility on the Front Lines”