“To keep the body in good health is a duty. . . .otherwise we shall not be able to keep our mind strong and clear.”

In the Buddha’s day, and although he is always envisioned as seated, people were getting plenty of exercise. Now we have to do it purposefully to help maintain health. I wonder what the Buddha would think of Olympic weightlifting. 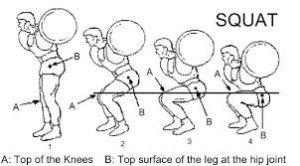 This question was inspired by an informal “squat off” between the two best lifters at the Inner Strength and Fitness Gym where I work out in Santa Fe. Consuelo Rios (25) had challenged Kyle Thacker (29) to compete, and I decided to watch and write about it. Preparation involved Googling for quotes about weight training. There, oddly enough, I found the one by the Buddha, but also that term “badass,” which I used in my title. It’s associated with the vernacular in gyms where steroids must cloud the air. Here’s an example: “Train hard, eat clean, talk dirty.”

The ground floor of my gym where the platforms are has never been that colorful in my memory. However, during active hours that often go late, there is the sound of weights crashing, grunts, and the occasional curse mingled with coaching commands and a noisy and sometimes kind of ribald camaraderie. It is an intense area as opposed to upstairs where members move around freely, quickly, and typically without much visiting. “Get it done and get on with the day” seems to be the theme up there. 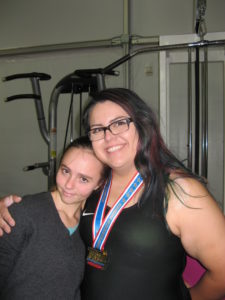 So what brought Consuelo and Kyle, state gold medal winners, to Olympic lifting? There is quite a contrast between the two in this regard and in many others. At 5′ 6 ¾”, Consuelo is a real powerhouse weighing 111.8 kg or about 245 pounds. She began working out at the gym four years ago to get physical therapy for a knee injury, and owner Dan Yarbrough eventually encouraged her to make lifting her sport. She also works at the gym.

Kyle is trim and muscular at 5’9″ and weighs 74 kg or about 163 pounds–“on a good day, post-donuts,” he jokes. When asked why he began weightlifting, he laughed, “Because I was tired of  being a little bitch.” (He weighed about 120 pounds when he began training in 2010.) 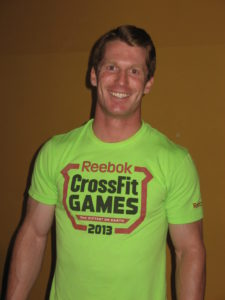 Kyle moved to Santa Fe from Kansas last year to work as an assistant golf pro at an elite country club. (Interest in the game has since risen among female members.)

Kyle, whom Consuelo has nicknamed “Ginger” because of his red hair, can be fun to tease. Months ago, I shared the information about a friend’s patent to stimulate testosterone production in both men and women through scent. One evening while working on his clean and jerk, Kyle brought the subject up again. He made a disdainful comment about supplementation as he began to raise a loaded bar to his collarbone.

“Well,” I retorted, “the ladies wouldn’t need it if we could just sniff your elbow everyday.”

Kyle lunged, lifted, held, lowered and dropped the bar– and collapsed into laughter.

Long ago, I thought that weightlifting was about brute strength, but as in the case of Consuelo and Kyle, I soon noticed how intelligent the athletes are. The brain has to connect both in series and all at once to multiple places in the body, and the challenge seems to be addictive in a different way from free-ranging sports.

It’s always inspiring and educational to watch experts, and so I looked forward to the squat competition last week. When I arrived, Kyle was frowning as he stretched to relieve soreness from the previous day’s workout. Consuelo, on the other hand, was really “up” over the opportunity to try to outdo him. She did, in fact, triumph by lifting 160 kg (352 pounds) and then going on to raise her personal best to 170 kg (374 pounds).

Consuelo had trained earlier, and after she went upstairs to work in the office, Kyle resumed training by working on the clean and jerk. He won a gold medal earlier this year for lifting 126 kg (277 pounds). When I left at 7:00, he was still training, pushing himself to the limit as always. 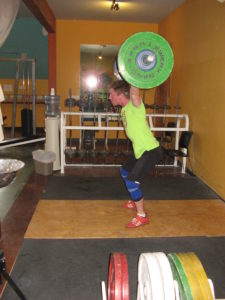 As I said earlier, Consuelo hopes long-range to compete nationally, and I’m sure she will do well. In a few weeks, Kyle will move to Florida to spend the winter working at a country club that fortunately escaped damage from Hurricane Irma. Very sadly, our time together seems to have come to an end.

Two days after the competition, a notice appeared on the bulletin board announcing that the gym will close permanently on October 15. It’s time for Dan Yarbrough to move on to something new. Many of us had anticipated this but were kind of stricken nevertheless. The locals immediately began to wonder, “Where do we go from here?”

I hope to continue with my own exploration of weightlifting with the best training possible. I don’t intend ever to compete; I just want to learn how to do my best. I have concluded that the Buddha would understand. The experience is like entering into a large chamber of the Self where many doors remain to be opened. On the day of the announcement, I worked out alone downstairs until closing. A popular gym quote had come to mind: “Go Hard or Go Home.” I had decided to be a badass and stay.

One Response to “From Buddha to Badass”