“If you don’t like fruit cake, it’s because you’ve never had a good one.”

The late columnist theorized that everyone hated fruitcake and that there were really only four or five fruitcakes making the rounds in the country. If you didn’t give yours up by year’s end, something terrible would happen to you.

Bombeck’s column fortified fruit cake’s bad reputation. However, as my sister Kate says, “If you don’t like fruit cake, it’s because you’ve never had a good one.” I’ve just returned from a weekend at her country place making a really good one. “Black Fruit Cake” is a recipe inherited from our mother. We’ve been doing this for seven years now, ever since I moved to New Mexico.

It’s quite a project, and we double the recipe to gift family and friends who have long been in the “fruitcake loop.” We just added Jeff to the list. Kate’s good-looking neighbor, he was dealing with his 50th birthday Saturday and sat down to visit with us for a while as we worked.

Jeff is one of those unusual guys who can do anything with his hands, and he had come over to assess a troubled washing machine. He has constructed from scratch over the last few years his attractive homestead on the adjoining property. He drove over in a Tracker he had assembled from three vehicles.

Our lively conversation ranged widely. Among the many topics were the conflict in the Middle East and Jeff’s experience in the Gulf War, suppressed archeological finds, biblical prophecy, and Japanese auto engineering. We were pleased to learn that he disapproves of “doctor-enhanced women.”

We were also pleased to learn that he loves fruitcake. He used to take it hunting in Wisconsin. We agreed that its high caloric content would make it great survival rations. We may make up a big batch and bury it here and there, just in case.

I was chopping fruit and nuts while we talked, and Kate was making batter. We really enjoyed the visit, which made the time pass quickly. When Jeff left, however, we still had hours of work before us. The making of this fruit cake is a major project, and I gathered details this year, knowing that I would write about it.

Our recipe has brandy and molasses in it as well as the usual spices, nuts, and candied fruit. I bought dates, pecans, raisins, and currants at the store, but this year Kate ordered the fruit (red and green cherries, pineapple, and citron) by mail. The citron was shipped from Italy, and the rest came from a farm in Wapakoneta, Ohio. It was all fresher than usual, so the cake should be especially good. 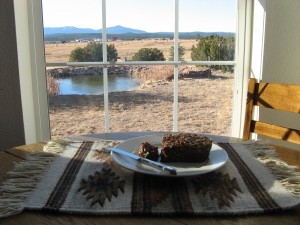 Once everything has been chopped and the batter finished, we combine it in a big pot. Wearing new rubber gloves, I plunged in to mix the 23 pounds of dough by hand. Then it has to rest in the refrigerator overnight. The activities of the first day, including clean-up, took five hours; and so did the baking of 18 loaves today. The cost of the ingredients comes to about $100.

So our Black Fruit Cake is rich on many different levels. It is, for one thing, hands down the best fruit cake I’ve ever eaten. And if food is enhanced by the pleasure that goes into its creation, this cake must be nourishing in ways hard to imagine. It is imbedded with the experience of our fine time with Jeff and of the view of flocks of robins and mountain bluebirds visiting Kate’s pond. It has also been enriched by the sisters’ memories and the usual sharing of new knowledge as we visit. And it is a testament to a familial appetite for work. I cannot imagine buying a lesser version, ever, at the store. Maybe it’s the store-bought version that has given fruit cake a bad name. Black Fruit Cake would be a revelation.