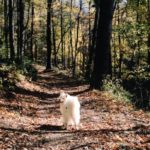 It was during my woodland walks with Cassie the Samoyed that I discovered an ally in nature.

THE TRAIL OF TREES

We are all so occupied with the daily detail of getting along in a materialistic culture that we may be unaware that spiritual support and guidance are always available–especially in nature. With Cassie in the lead, I discovered it on forest trails.

Walking with Cassie was very different from walking alone. Things seemed to appear for me to see. But as I proceed to share some of the images I collected on camera, I have to clarify that I was walking in a state of inquiry. I wasn’t sure what I should be doing with my life, beyond being a good wife to a very fine man and a supportive stepmother to his exceptional children. Wasn’t I supposed to be doing something more?

That private question intensified as the years went by, and I began to see commentary in the woods around McLean, Virginia, where we had moved from Nashville. Some examples follow.

“Really. Everything’s going to be all right.”

These scanned images aren’t as clear as I would like. However, I wasn’t clear-headed when I took the photos.

I was in a state of wondering, alone except on weekends, keeping the hearth for husband and visiting children. I felt as frazzled as this tree Cassie and I passed on a trail one morning.

And as we continued to wander, it was as though a dialog on the nature of partnership was manifesting. For example, the partnership below seemed to be working, but it doesn’t look equal, does it? 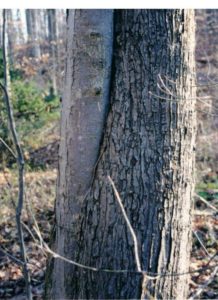 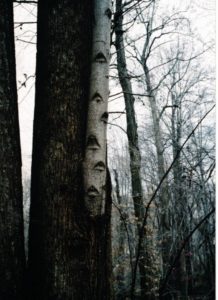 Then another tree appeared that was more blunt. Can’t you hear those funny lips on the pale bark screaming “Help! Help!” But it was winter, so things seemed more desperate then anyway.

On another day, I saw evidence of what seemed like a very unnatural partnership. In the example below, what had been the choking agent? Had someone come to the rescue? Or maybe a fire or disease? And regarding what endured, well, did one admire it? Or did it seem an eyesore, something to be cut down and allowed to serve by turning into compost? 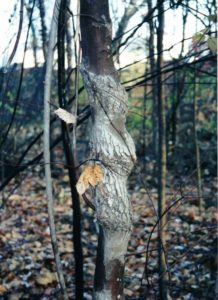 “What happened, for Heaven’s sake?”

To speak more gently, there was a certain sense of companionship with the trees during my time in the woods–no pressure in any way, just all the time in the world to think. 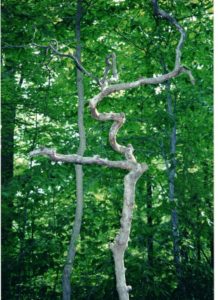 An Image of Confusion

Nevertheless, cautionary images continued to manifest. I felt compassion for the dead tree to the right whose branches seemed confused. Maybe it had died because it couldn’t decide which way to grow.

But finally reassurance manifested. There had clearly been a severe storm that snapped the young tree below in the middle. However, it had flourished below the break. 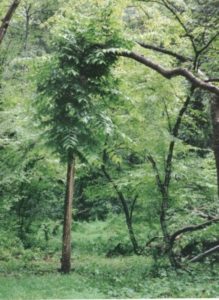 THE END TIME IN BIRMINGHAM

Eight more years of marriage ensued with homes in Santa Fe, another in Nashville, and finally in Birmingham, Alabama. My husband’s career advanced rapidly, the children attended college, and I took a run at establishing that healing center in Santa Fe. It was like we were all scattering in a way, a much wider spread inevitable.

In Birmingham, my husband ultimately fulfilled his enormous potential in the role of CEO of a huge national network of inpatient rehabilitation hospitals. Cassie and I kept on walking in the woods, but it was different. We were now exploring Oak Mountain State Park about 18 miles south of the city, and I soon realized that the forest was not healthy, and with good reason.

It existed in a bowl of pollution with frequent warning signs overhead on the highway announcing dangerous levels of ozone. Even before auto emissions became such a problem, Birmingham air had been afflicted by belching steel and iron mills beginning in the late 1800s, and the effect was visible in the park.

Cassie and I climbed high into the hills, attending to a voice in nature that seemed tired and jaded in the relative absence of birdsong and leaves rustling under critter feet. Every now and then we would encounter a creek with fresh water running, but always there was the sense of a forest struggling with decades of pollution that had been absorbed by soil, bark, and leaf in a world that seemed to be failing. And discussion had begun about the same in my marriage. During the months before Cassie and I hit the road for Santa Fe, a series of images on our morning walks foretold closure–images of a bird, a bat, and a knife. 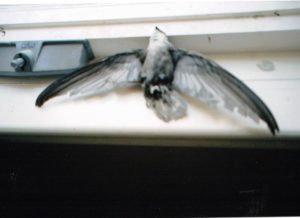 The first image was the body of a chimney swift that I discovered in my office window on returning from a lengthy trip. Chimney swifts don’t perch but cling to walls with long claws. They often nest inside chimneys, and it must have entered there.

The house has three levels, and my office was on the top floor with windows overlooking the lawn and the street beyond. The little bird may have flown all over the house trying to escape.

It had died between a shutter and glass, the pane scarred by beak and claw as it frantically tried to access the freedom in full view. I always think of birds folding their wings when they die, but these wings were open and rigid, and it lay on its back. I buried the little creature in the back yard next to a stone for “Luke,” who must have been the pet of the previous owner. As I put some seeds in the grave and covered it with soil and pine needles, I remembered a novel I loved by Taylor Caldwell. Titled Dear and Glorious Physician, it was about St. Luke. It was a comforting memory. 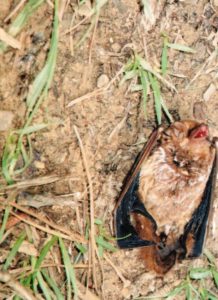 Then a few months later, I had the encounter with the bat. Cassie and I were rambling around a lake when I heard a soft thud nearby. After a few more yards, curiosity got the best of me, so I secured Cassie and turned back to look. There lying among the leaves was a small brown bat, perhaps a juvenile. It lay on its back, bright red blood emerging between lips and sharp teeth. Aren’t bats nocturnal? Why was it out that morning?

And its death in front of my eyes seemed to symbolize “bat reversed” in Ted Andrew’s handbook, The Animal Wise Tarot. In that case, the message is that “We need to take a new perspective; we need to let go of the past. We need to release or change some aspect of our life for rebirth to occur. We must remember that change is only upsetting to the degree we remain emotionally attached to what is no longer beneficial.”

OK, got it. And the next image that manifested was even more pointed, let’s say. I found a big knife on the trail, and I picked it up and took it home.  It looks real business-like, military maybe. It says a “Steigerwalt” design on the blade and “Benchmade” on the other side. I can’t figure out how to open or close it; I’ll have to get a man to show me someday. 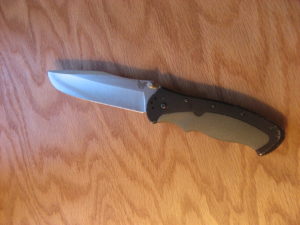 But I looked up the symbolism of the knife and learned that it is normally “a sign of division,” as in cutting ties, etc. Got that too.

And so it came to pass that on Thanksgiving Day 2005, all the rest of the family convening elsewhere, Cassie and I hit the road  for Santa Fe. At the end of this post, you will see an earlier photograph of a dying tree in Oak Mountain State Park, broken branch lifting in farewell.

And although my departure seemed inexplicable in conventional terms, I never looked back. After all, I had devoted 18 years to a wonderful family and analyzed my presence in their lives to the depths. I think I had also benefited from guidance and support in a spiritual domain that I continue to explore. And in preparing to write this blog, I found an anonymous quote that seems finally to explain my ultimate departure:

“Spirituality is an individual journey. There are many paths. Follow your soul. It knows the way.” 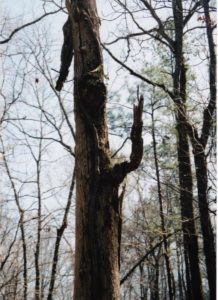 2 Responses to “Guidance from an Animated Natural World”