When the winds of change blow, some people build walls and others build windmills.

There are many people all over the world, including in this country, who would like to return humanity to a mythical time when things were “right.” But how do you forestall change in the form of evolution? Omar Mateen tried in Orlando on Sunday and made of his own death a warning: The refusal to adapt could be suicidal.

Nevertheless there will be more attacks by individuals who are simply insane or enraged by some aspect of our evolving world that they cannot personally tolerate. In this troubled era, we all need to find ways to respond wisely instead of plunging into fear, anger, and vengeance.

And one teaching that is going to be with us daily is The Law of Unintended Consequences. We’ve been living that since 2003, and Mateen invoked it in an unexpected new way. He probably couldn’t possibly have imagined that his heinous act would serve to inspire more compassion and support for the gay community he hated than anything to date.

For example, on Monday night, 750 people gathered in the Santa Fe Plaza to hold a vigil for those killed and wounded in the night club in Orlando. I didn’t attend, but I have been thinking a lot about my gay friends, extraordinary people all, who are much to be admired for the courage they have shown in choosing to live an authentic life.

And I can’t help but wonder if the revolution in acceptance of alternative sexuality serves our survival as a species. Sexual diversity has always existed but so has the mandate to procreate for a variety of reasons. Now with overpopulation becoming a worldwide threat in the face of impending climate change, that endemic sexual diversity may serve a dual purpose. The bringing of children into the world can be more carefully considered for their benefit; and women in particular are being set free from compulsory childbearing to cultivate other gifts. It’s quite simple: Not all of us, including men, are meant to be parents, especially good parents. Some of us have the desire and the need to focus on other important things.

How all the current turmoil will play out is impossible to know now, and daily news will continue to be punctuated by horrors. A new app has just come out that will enable people to stare at a campfire to relax, but that’s not going to be very helpful. Time in nature has always provided us with respite from stress, and even a garden can reveal teachings about how to endure this troubled time. I am finding wonderful solace in my own garden now and hope that sharing some of my observations will be helpful. 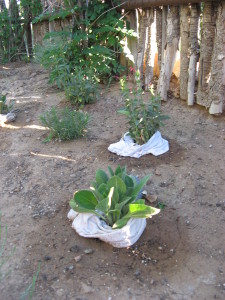 I live in a desert environment on the outskirts of Santa Fe. The “soil” of my garden has hardly any organic content. I’m successfully growing trumpet vines along the coyote fence but have otherwise decided to focus on drought-tolerant flowering plants.

This spring’s imports have been shriveling each day in the heat. I finally figured out that if I soaked worn-out wash cloths and dish towels and wrapped them around the base of the plants, kind of like a diaper, they will make it through the day without withering. Then they will flourish, seed, and be back next year, kind of like children who have enjoyed home.

Maybe my backyard beds look a bit scruffy as I experiment, letting some wild things grow until I can figure out whether they will flower in an attractive way. Last year there was an unfamiliar weed that really thrived, growing more than two feet tall. When it finally bloomed, it wasn’t something that appealed, so I uprooted all of it. Then, wonder of wonders, this year the undiggable soil in which it had flourished could easily be tilled down several inches. It must have been the long roots that broke it up. A lesson: Weeds, as other things we judge obnoxious, can serve to change things in a positive way. 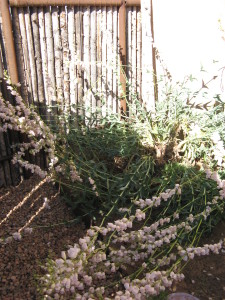 I proceeded to plant a single tomato in that weed-blessed ground where none had thrived before, and it’s doing great. It doesn’t need to be diapered. Even as it flowers, it sends out a tough message: “Let me be. I can do this.” The attitude is masculine so I have named it Huey.

Along with Mexican hat, wild purple and pink penstemon flourishes here. The purple one is moderate, but the pink one, penstemon palmeri, is ambitious to a self-destructive degree, another lesson. During the five years I’ve lived here, several have found prime spots and overdone it. They grow and grow, blooming abundantly, the first stem that emerged to bear blossoms eventually turning into something like a bark-covered trunk. And then tragedy. The weight of the flowers is too great, and the limbs split off the trunk and collapse. So much for the “too big to fail” concept. 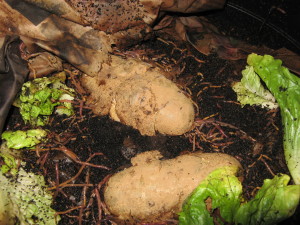 Of course I’m continually amending the soil a little and most specifically with worm castings and worm juice from my double-deck worm bin in the garage. This is another example of nurturing, and I am very fond of the worms. The garbage I give them is mostly organic, and every now and then I “treat” them with a whole baked potato. It’s like feeding pets and makes us all happy.

And I know that these worms could transform the world. The “black gold,” as their castings are called, is basically the best soil amendment known. As industrialized agriculture exhausts our soil and corrupts it with pesticides and chemical fertilizers, the time is coming when we will desperately need to learn how to repair it to grow enough to survive. The worms know how to do that, and since they thrive on healthy food, we would also by serving them that kind of waste.

I can’t help but feel that my grounds are aware of my caring, as when I go out every morning to get the newspaper and pull weeds from the gravel with my tweezers. Just kidding, but not by much. And I have had a sign of response in the unlikely appearance of a prickly pear cactus last year. 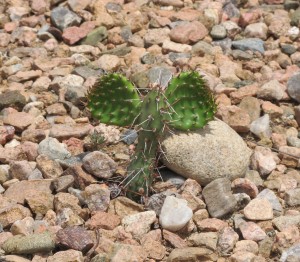 The will to live that drove it up through the darkness, the gravel, and the synthetic weed barrier to commune with the sun was humbling, and I put a rock nearby to shelter it a bit over the winter. Last year there was only one pear paddle; this spring two sprouted that look like angel wings on the torso of the original plant. There is a teaching here as well. As the cactus matures, the spines on the paddles are getting more and more fierce. We need to believe in guardian angels, but we will also need to be tough rather than trustingly spineless as things continue to deteriorate.

And if we pay attention, nature will provide many examples and guidance about what it takes to endure, even to flourish, beyond difficult circumstances. All of us every day and in countless ways are self-selecting for adaptation or extinction, so to speak. And among those consciously committed to endure whatever, I count myself. I don’t know how fast change will advance in the natural world as well as the world of empires. However, I want to survive long enough to write about the transformation I trust will emerge from the wings of the drama onstage. In the meantime, things are going to be very, very interesting.

2 Responses to “Guidance in the Garden”