Maybe dogma is the work of the devil.

All of a sudden I’m thinking a lot about the beard. Associated since ancient times with wisdom and the power of words issuing from the surrounded mouth, it suddenly holds center stage in this country.

I speak of the beard of Major Malik Hasan, the Muslim psychiatrist who has been given the death penalty for killing thirteen compatriots at Fort Hood, Texas. In violation of Army grooming rules, he has grown a beard that proclaims the Islamic extremism that turned him into a murderer.

Hasan’s defense team successfully defended his right to maintain the beard during his trial. Now that he has been convicted, he may be forcibly shaved in prison. Although he welcomed the death penalty, Hasan is now determined to fight for his beard. To shave it would be a sin he says.

How odd that the killing of thirteen people would seem all right but shaving a sin. He must have a different understanding of that word. This assumption sent me to the dictionary for the definition of a sin: “an offense against God, religion, or good morals.” Hasan is thinking about religion, I realized, and I am thinking about morals.

That took me back to a point made in Create Your Own Religion by David Bolelli, the book that I mentioned in an earlier post. I have finished it, sister Kate and I taking turns reading it aloud on the drive to and from Marfa, Texas, earlier this month. We were delighted to discover in the author a kindred, questioning spirit who is also extremely knowledgeable about religions, which we are not.

One of his points I will never forget is how truths manifested during moments of profound spiritual connection have been converted into dogma by followers wishing to conserve them. Judaism, Christianity, and Islam all three believe in one God divined through revelation. However, the accretion of rules and rituals defining their different perspectives has created a fleet of diverse sins from the weighty to the seemingly trivial. For example, ignoring the Sabbath is a sin for Jews and a “proud look” (Proverbs 6:16-19) is a sin among Christians. 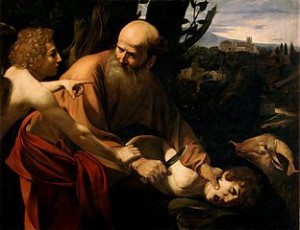 But how, in particular, did shaving become a sin in Islam? More research revealed that it may have to do with hygiene. In a collection of Islamic traditions called the Sahiri Al-Bukhari, it is recorded that God commanded Abraham to keep his beard, trim his moustache, shave the hair around his genitals, and shave his armpit hair. Thus the sacred beard.

This collection is just one example of the human inclination to differentiate religiously through commandments, laws, rules, rituals, and definitions of sin. All evolve into  dogma that calcifies, imprisoning followers in the past and in some cases seeming to compel the faithful to disconnect from their own brains.

The further problem, as Bolelli writes, is that dogma tends to inculcate followers into dualistic thinking, which greatly but dangerously simplifies things in a complex world. The author provides examples: God or the Devil, good or evil, reason or faith, feminine or masculine, physical or spiritual, mind or matter, and on and on. If only there were more “and” and less “or.” In view of all the violence stemming from religious differences, maybe dogma is the work of the devil.

So here we have Major Hasan fighting for his beard in Fort Leavenworth, the same prison where Pfc. Bradley Manning will be fighting for the right to have sex change therapy. And with regard to Hasan, the weirdness of Army rules is afoot. Army Regulation 670-1 prohibits soldiers from having beards and goatees. On the other hand, it does allow neatly trimmed mustaches. Another oddity. Does that come from the story in which God ordered Abraham to trim his mustache?

At what point, one wonders, will the beard issue turn into a crisis. A forced shaving would involve military police, medical backup, and filming of the event. Hasan’s facial hair will grow daily. Will his forcible shaving become a regular ordeal? Is this bizarre or what?

Due to the appeals process, Hasan will probably be imprisoned for as long as ten years before he is actually executed. Will he remain apart over all those years, or will there be a moment here and there when he begins to realize that his fellow inmates are men who have personalities and stories of their own that will dilute implacable enmity?

That is a question on both sides, actually. Will “our” men ever be able to respond to his presence with something other than outrage and bitter hatred? Is it possible to tap into a sense of shared humanity when all are trapped in community with no place to go? Can redemption happen anywhere?

But back to the beard, and it is amazing how much material there is on its symbolism throughout time. It has seemingly been forever associated with authority stemming from masculine force and intellect. And that takes me to a section on the beard in The Book of Symbols by the Archive for Research in Archetypal Symbolism.

In tracing its symbolism, the authors evoke the familiar image of a man deep in thought, stroking and tugging at his beard as he ponders a problem. The connection with mind was such, they write, that the Greek word pogonotrophos, “man with a beard,” was a synonym for philosopher. Unfortunately, the mind can be wayward in spite of the most meticulously groomed facial hair, and the last paragraph of this section makes the point with which I will end:

“If beards catch the projection of intellect and eloquence, they also represent the time when it goes awry. Misbehaving or distempered dwarves of Germanic fairy tales like ‘Old Rinkrank’ and ‘Rumpelstiltskin’ get their long beards caught as the means of their undoing. So can human men (and women) get tripped up in a lengthy flow of senseless thoughts or foolish words.”

One Response to “Hasan’s Sacred Beard”