I have thought of a new archetype: The Blind Seer. The inspiration is Hillary Clinton.

We’re all processing the meaning of this election, and my thoughts keep returning to a comment made by a Jungian psychoanalyst at a lecture addressed in an earlier blog. He said that the President of the United States is an archetype, one of those mythic characters believed to reside in the collective unconscious. So what does The President archetype look like?

George Washington immediately comes to mind and probably Abraham Lincoln. On the more unusual side is Franklin D. Roosevelt in a wheelchair and Barack Obama, a black man with an exotic name. However, from the beginning of our national history, the individuals leading this country have had one thing in common: They have all been men. And The President archetype has probably been imagined as a combination of at least three others:  The Hero, The Sage, and The Ruler, all male images again. Donald Trump may think of himself as The Magician (“I will make America great again”), but he has been identified by Jungian analysts as The Trickster, a male character who fools himself as he fools others.

In the last regard, Hillary Clinton and all her supporters were certainly fooled about her prospects. The presidency may have become a secret goal for Hillary very early on. Her path in life certainly suggests that she had an idea of the required qualifications and was cultivating them. However, Donald Trump’s arrival onstage turned the table on which a deck of archetypes lay. It fell onto the floor, and only the Trickster card landed face up.

This has been dizzy-making from the perspective of those trying to assimilate a new truth: Virtually anyone can become president in this country–as long as that individual is male. Understanding why begins with the long view.

America is a very young country in the history of civilization, but certain eras worldwide have been punctuated by stellar feminine leaders. Take Cleopatra in Egypt, Catherine the Great in Russia, and Queen Elizabeth 1 and Queen Victoria of England to name just four. They had the advantage of being members of ruling families, born into wealth and power and the assumed genetic potential to lead. Their achievements probably opened minds and doors all over the world–except here.

In spite of (1) Hillary Clinton’s accomplishments and range of experience, (2) the support of a majority of individual voters, and (3) fundraising that was twice as successful as Trump’s (about $1.2 billion vs. almost $650 million), she did not triumph. A freak of something-or-other? The quixotic finger of Fate? The interference of an indignant male deity? How about a blessing?

There is so much to be processed before representatives of the collective mind will be able to acquire an accurate perspective on this outcome. However, I personally am relieved about it for Hillary Clinton’s sake. She really gave it her all, and now she can relax, spend time with her grandchildren, and assimilate. And weirdness was looming if she had won.

For one thing, it was going to be odd having Bill Clinton rambling around the White House while Hillary was occupying the Oval Office. What would he have been called? First Man? First Gentleman? What would his responsibilities have been? The foremost role of the presidential spouse has always been serving as hostess and managing all the social and ceremonial events, complete with flower arrangements. The First Lady is also the one who redecorates the White House and orders new china. Would Bill have been good at any of that?

And we know what was coming visually. Every president ages rapidly under the burdens of office, and aging in the feminine is especially distressing to the public eye. Hillary was going to need a fabulous wardrobe, a resident makeup artist, hairstylist, and manicurist, plus a practitioner on call for Botox treatments. And what about Bill’s health? What if it had failed? Hillary might have felt the essentially feminine archetype of The Caregiver raising her demanding head to interfere with state duties.

Any woman with presidential aspirations needs to think about these things. She’ll be damned if she’s good-looking and damned if she isn’t. She’ll be damned if she has a husband and damned if she doesn’t. If she doesn’t have a man standing by her side as women stand by their men, it will be a very lonely go; and since she can’t do all that hostessing and flower arranging and redecorating stuff on top of everything else, who will? On the other hand, a single first lady will be an enduring source of inspiration for The National Inquirer, as it fabricates liaisons with members of Congress and heads of state or speculates on lesbian romps in the Lincoln Bedroom.

Do you see where I’m going? Hillary will be spared countless indignities, and we won’t have to serve as witnesses. And now there will be beautiful young women to watch instead of the accelerated aging of one who is already an elder. I am referring first to Trump’s daughter Ivanka, who will reportedly be moving into the East Wing to manage the international Trump empire under the canopy of presidential authority. And maybe she’ll take care of the hostess stuff too, since Melania apparently plans to stay in New York with her young son. Maybe Ivanka will become the titulary First Lady, another thing for The National Inquirer to exploit.

Nobody knows how the Trump presidency will develop; but at the moment, it’s looking kind of like an anything-goes, very masculine free-for-all. The good news is that this may stimulate creativity within the general public, as the allegiance to “the way things are done” vaporizes. This goes for the feminine as well. New ideas and new strategies must compensate for the realization that the customary routes to power are closed to us. 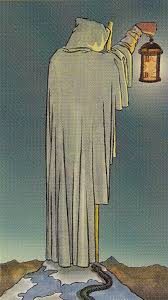 So in spite of her failure, Hillary Clinton may yet succeed in an unprecedented way. A new symbol comes to mind, one that plays off the familiar archetype of The Hermit, the robed, wise leader who carries a lantern to guide others. In my imagination, though, the usual male figure is now feminine; and under a hood, she looks up at a black sky with white eyes, a woman who was blinded by ambition to the truth of things. The lantern she carries will light the way for the women who follow.

The idea is that the road Hillary Clinton has long traveled has come to a dead end, and it is time now just to rest and think about all she has seen and done and learned. Detached from personal ambition, she may discover and share a kind of wisdom that will inspire and motivate the American woman as no one else ever has. She might acquire a stature greater than she ever imagined. Since it would be all to the good, I certainly hope so.