Carrying a sign that said “Je Ne Suis Pas Charlie” (I am not Charlie) might provoke the question, “Why?” Then the discussion could begin.

Four days after the terrorist attack on satirical newspaper Charlie Hebdo, more than one million people marched in Paris to show solidarity against extremism. Some carried signs saying “Je Suis Charlie” (I am Charlie) in support of freedom of speech. The context is a little problematic for me, even though it doesn’t seem politically correct to say this in the moment.

In my own mind, freedom of speech brings up the imagery of both a low road and a high road, depending on how individuals exercise the right. The low road seems to descend toward something like a dark canyon, and those who travel it create obstacles and hazards for those who follow. The high road is imagined as upward bound, heading for a stunning view. I like to think that those who travel the high road toss seeds along the way that will beautify the path for others who follow. 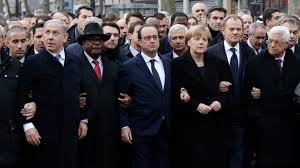 Heads of State Marching in Paris

Naïve? Well, I’ve really enjoyed satire at times, but I don’t like the kind that can evoke tragic consequences. Is it  just me or does the world feel like a tinder box to other people as well? Maybe it’s a good time to think about the kind of so-called humor that could ignite it.

So what is funny, anyway? Among cartoons, comedians, plays, and movies, the ones that have really amused me are those that have served to hold up a mirror to my own life, personality, and culture or to human nature in general. They act like an electric shock to the funny bone, and you react by doubling over in mirth. You’ve been nailed by the truth.

I have for several years enjoyed the little pad of daily cartoons The New Yorker puts out, and the artists often seem to show a touch of genius. Some I have pulled and saved. There was one such last February.

In this simple little drawing, two salmon are struggling upstream to spawn. The one in the lead says to the one following, “Next year, I’m pleasuring myself.”

I burst out laughing. Now why is this funny? It’s not about salmon, it’s about life itself. It’s about duty and responsibility, about conforming to the expectations of society, about trying to do the right thing, providing for the survival of your lineage, on and on. And it’s also about losing the point and discovering within the self a desire just to stay downstream and have some  fun. A human knows there probably won’t be a next year for the salmon, and that makes it even funnier.

On the other hand, humor that goes after the throat, the spirit, the soul, is a whole different genre. In this case also, an image may act like an electric shock that hits a nerve the cartoonist can’t even imagine. It is an attack on The Other, whose differences, a product in part of the perpetrator’s ignorance, have rendered it inhuman. The electric shock doesn’t hit the funny bone; it hits the button for implacable hatred and retaliation.

Maybe it’s fun for the individual or the newspaper, but the consequences can be tragic, as in the massacre at Charlie Hebdo. At this time in history, malice expressed through freedom of speech could create tragedy of an unprecedented order of magnitude. The low road may beckon, but perhaps at this critical juncture, a sign should be posted there: “Refrain.”

So even though I’m for freedom of speech, I think there are limits. Ideally, these would be set by the sense of individual responsibility driving the tired salmon in the cartoon. And the purpose of my sign, “Je Nes Suis Pas Charlie,” would be– not to injure or dishonor–just to get someone to ask “Why?” And then the discussion could begin.