We’re ready. If a terrorist attacks the Tutoring Center, we know what to do.

I guess it was inevitable that the very remote possibility of a terrorist attack would inspire a briefing on preparedness at Santa Fe Community College. This must be happening almost everywhere in our new, angst-ridden society. On Friday we had our annual tutor training at the College and saw a video dramatizing what could happen and how to respond. Now we’re ready.

I will detour for a moment to set the stage. I’m an English tutor at the College two days a week. This is one of the most enjoyable and rewarding experiences I’ve ever had. The students are unfailingly courteous and grateful for the help, and my peers are a very congenial and brainy group. It includes retired professors and scientists from Los Alamos National Laboratory as well as gifted students in science, engineering, and math. The English tutors are experienced in teaching, writing, editing, and communications. Among all of us, relationships with students begin to form with repeated visits.

Our spacious quarters are at ground level. On one long length there are rooms with windows facing west. On the opposite side, windows look out on a large atrium where the students gather. There is a balcony overlooking this area from the second floor.

Almost all the students coming onto the campus are carrying backpacks that don’t go through a security check. In the video, a man dressed in black brings a backpack into a big office building. In a long hallway, he pulls an assault rifle from the backpack and begins gunning down people right and left. We got some major guidance from the video. If you come under attack: (1) Escape if you can; (2) if you can’t escape find a place to hide; (3) secure your space and remain silent; and (4) if you have to, turn anything handy into a weapon and fight.

So by the end of our briefing, the tutors had identified the two doors from which we could exit and the one room that we could gather in and barricade. Soon there may be big rocks in the rooms with windows to the outside that we can use to break out if we have to.

How odd to be thinking about this. However, and probably like many people during this stressful time, I had already envisioned an attack at the College. My drama goes like this:

I am walking down the hall on the second floor when I detect the stir of tension, alarm, and young voices choking off. I join some students looking down from the balcony. Below us stands a black-garbed terrorist. He barks an order: “Don’t move!” Enjoying his empowered moment, he sweeps the room of wide-eyed students with the barrel of his rifle. Sizing up the distance to the man below, I stand up on a sofa, step onto the ledge, and leap into the air. I land on the man’s back, my right hand grasping his head. As we hit the ground, I smash his head on the floor and blood splatters. Done.

Working out at the gym supports a sense of physical competence; but as I said, this kind of fantasy is probably not all that unusual in an era when the news, movies, TV, and video games have made violence a staple of the imagination. At the same time, many of us are cultivating audiences in some way, so starring in an imagined drama is not much of a stretch. But how realistic is such a possibility when chance is in charge? I received a teaching in this matter a few years ago.

I lived on an old residential street in Santa Fe at the time. One evening I set out for a stroll with my beloved Samoyed, Cassie, who was elderly by then. Our route took us down a narrow street where a tall wooden fence hid the yard of a corner home. We had walked this way many times before, but that evening there was a dog within; and it began “fence fighting” as we passed by, rushing up and down the length of the yard and barking viciously. Cassie just kept on walking on her long leash, both of us feeling protected by the boards. When we reached the end of the block, however, the dog hit the fence running full tilt and broke through. It jumped on Cassie’s back, and they went down on the sidewalk, the dog snarling, Cassie screaming.

I ran and lunged for the dog’s collar. I have a faint memory of wrestling with the animal, my hands holding its jaws shut. When I came fully into my head, I was lying on top of a boxer, and it had gone completely still. Three young women were walking briskly toward us down the intersecting street. My mind screamed at them, “You had better come help me, or I’m going to kill this dog!” I’m sure I had enough adrenalin running to choke it to death if I had to. One of the young women went after Cassie, who had started down the street dragging her leash. The two others kneeled at my side. “Good reflexes,” one said. “Are you OK?”

I began to get up, still holding onto the boxer, which could, of course, have bitten my face off. It just looked dazed, though, when our eyes briefly met. One of the young women took it by the collar and walked some distance away. I have since wondered if she knew the dog. The other two were very solicitous and ascertained that I wasn’t seriously hurt. The knuckles of one hand were bloody from scraping the sidewalk, and something was wrong with my left knee. My chest hurt badly, as though I had pulled a muscle or bruised it on the dog’s head when we went down. 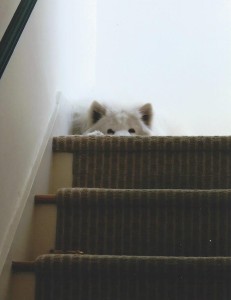 A little disoriented, I thanked the young women, and Cassie and I turned around and headed for home. I was limping a little, but Cassie’s playful lunge at a stray cat along the way made it clear that she was totally fine. When we got home, she settled down in her usual relaxed manner as I went about the business of examining my body and dressing my wounds. At one point I paused and demanded of her: “Do you realize that I just saved your life?” Cassie just looked at me calmly. When I think back on that evening, I imagine a response in her black eyes: “You needed to know this about yourself.”

On that evening, I stepped out of my familiar self to bulldog an attacking boxer, a thing I would never have guessed that I could or would do. It was not smart, and I was awfully lucky that those young women were nearby; but the memory of my reaction is nevertheless reassuring in a certain way. Probably few of us know how we would react to some kind of an attack. However, if something or someone we love is at risk in a moment of danger, all bets are off. There is probably no telling what we would do, how far we would go to protect them. It’s an ancient, instinctive thing.

So I think I’ll just accept a certain legitimacy in my fantasy about flying off that balcony. After all, I really do care about the students at the College.

One Response to “Locked and Loaded”