Next to the wound, what women make best is the bandage.

Who would have thought that a new appreciation of the male would fall as lightly into my consciousness as the snow flakes softly blanketing Santa Fe?

It happened on a recent morning, the delayed effect of a three-hour presentation on “Trends 2014” by José Luis Stevens, Ph.D., and his wife,Lena. They are founders of Power Path Seminars, an international school and consulting firm whose purpose is to apply shamanism and spiritual wisdom to business and everyday life.

This was my third time to attend their popular annual lecture on the salient themes of the coming year. It began with the announcement that the archetype for 2014 is the Warrior. (Sigh) Haven’t we had enough of this? Relief is in sight, José assured us, even if next year is again full of conflict. As he put it humorously, the “exit interview” of the Warrior is at hand. Only a handful of men were present to hear this news in a large audience that had braved warnings of an incoming storm.

So where is this perspective coming from? The source is the personality structure system that was channeled over three decades in California by a spiritual entity known as Michael. The personessence™ profile system applies not only to individuals but also to years. It is very complicated, and only a couple of points on the 2014 analysis will be included here.

For those who have never been drawn to Santa Fe by its alternative views on practically everything, the idea of the departing Warrior will be challenging—unless it seems timely. After all, there is much about the archetype to admire. It is organized, focused, goal-oriented, impatient, and ultimately combative. It can also be myopic, unable to see the larger picture. In this respect, a growing sense of Warrior fatigue is afoot in the land.

Nevertheless it is hard to imagine a different world. History seems to resemble a great plain on which one battle after another has been fought and presumably always will be. Is it possible that this landscape could change? According to José, the Warrior archetype will survive but evolve, gradually becoming more scholarly, contemplative, and philosophical–rather Samurai in nature.

José’s own fierce intellect seems representative of the predicted change. So did the demeanor of his wife, who spoke with equal ease and authority. A long-haired blond garbed in gilded cowboy boots and a brocade print dress, she took turns in discussing the details of the intricate chart we were all given to follow. When they brought up the need to develop a new dynamic between the masculine and the feminine, it seemed to manifest on the stage they shared seemingly as equals.

It was José who pointed out that the Warrior is in great need of healing. With that healing, he added, will come the healing of the masculine and the world itself. The concept of the wounded masculine has surfaced frequently lately. José proceeded to illustrate why through examples of injuries his male clients (he is also a psychotherapist) have suffered at the hands of the feminine.

These include never making enough money to make us happy, being continually criticized and made wrong, and being held responsible for everything that is amiss in the world. (Well, yeah, since you’re running it, I thought.)  He also distinguished between the sexes by saying that the masculine is associated with the physical plane, the feminine with the spiritual. (Except in church hierarchy, I noted.)

Throughout this discussion, there must in fact have been many parenthetical grievances percolating among the women in the audience. At least I softened, however, when José closed by saying how much the masculine loves the feminine and is lost without us. “If you would ever just say ‘Thank you,’ he said, “it would make all the difference.” 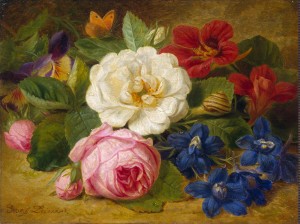 Bouquet of Flowers with Snail

Lena smiled enigmatically at his side, and then José turned to her as though passing the baton. Another challenge in the coming year, she said, is to reconcile the masculine and feminine within each of us. Women embody the energy of the Warrior as well, she added; and if we cannot create balance internally, then we can do little to heal the world outside.

One of the virtues of the Warrior, we were told that evening, is the ability to be blunt about the truth. I thought about that as I stood at a window the next morning watching the snow fall. I acknowledged that it was my very successful former husband who had indirectly provided me with this warm and beautiful home, and other truths began to roll in. It had been built by men, and men are also responsible for all the systems and appliances within, the computer I work with, the car sitting in the garage, and all the roads I drive. Aside from the world of nature, virtually everything I see and touch everyday has been created by the masculine mind gifted in science, design, engineering, and manufacture.

I don’t know how to do any of these things, and the processes involved do not interest me. My gifts lie elsewhere, and that may be something my sex needs to think about with similar appreciation. As I continued to look out the window, a maintenance man in his worn red pickup drove by, plowing the street with a blade he had attached to the front bumper. I have no idea how this is done. There are so many things men do that I cannot, and as I mentally audited their accomplishments, gratitude descended as softly as the snow. A healing began.

One Response to “Male Appreciation Moment”