I know of two women who really need a break from each other–Monica Lewinsky and Hillary Clinton. I kind of hope they get it.

So where were you at the height of the Monica Lewinsky and Bill Clinton scandal back in 1998? I had recently moved to McLean, Virginia, via Houston and Nashville, and I was alone most of the time due to a commuting stretch of marriage. To keep myself entertained, I was learning how to compose songs. The White House drama was nearby, and that was one reason why I decided to write a song about Monica, but there were others.

Having worked on Capitol Hill for four years during the Watergate era, I was having the sense of return historically as well as geographically. The possibility of impeachment was high profile again, and the sexual scandal reminded me of other cases of  illicit behavior among dignitaries that went public while I was working in D.C. There were many intelligent, attractive, driven people on the move in a world where the scent of power is aphrodisiac. The Monica thing was not uncommon.

In ’98,  her predicament reminded me to be grateful that I, while single, had not misbehaved to such stunning consequence. And just as Monica has resurfaced, so has my gratitude. Aren’t many of my generation thinking the same thing in this era when any flirtation, any indiscretion, is likely to go digitally ballistic?

As I sat at my computerized keyboard back in Virginia all those years ago, I felt compassion for  Monica, whose fall from grace had been so  noisy. An early line in my song went like  this: 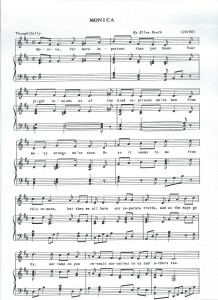 Your plight reminds us of

From  many wrongs we’ve  done.

Monica is  “up”  again by her own choice and through an article she wrote for Vanity Fair this month. Calling herself  in 1998 “arguably the  most humiliated person in the world,” she announces that she has resurfaced because “it is time to stop tiptoeing around my past–and other people’s futures.” This seems to be a clear reference to Hillary’s potential run for president. Monica announces that she hopes to become a champion of people who are increasingly being subjected to online humiliation.

As I read her article, however, I felt less compassion for her than I had before. She is now 40 years old and often refers to how young (age 24) and naïve she was when the scandal broke. However, according to Wikipedia–I guess you can trust Wikipedia–she had at age 19 launched a five-year affair with a married former high school instructor. She was not sexually naïve even if she may have been politically so.

So poor Hillary. Here comes Monica again just as she’s thinking about running for the presidency. Hillary reportedly called Monica narcissistic, and if  that’s true, then this bid for attention would certainly serve egotistic needs. Monica’s article suggests that she has been obsessively monitoring the attention she’s been getting all along, but that’s because the Clintons have never ceased to be “live.” If they actually retire,  Monica will be so 16-years-go at a time when we speak disdainfully of a recent tech innovation as “so last-week.”

But now to Hillary. It’s hard to know who these people are as human beings, but one must respect her achievements. Her wide-ranging experience is an extremely valuable asset and dwarfs that of any current contenders for the office of president, but I wonder if she isn’t a little tired. She will be 69 in 2016. Next to Ronald  Reagan, that would make her the oldest person ever to be elected president.

And with regard to we the people, after what will then be eight years of veiled racism, are we ready for another four at least of overt misogyny? It makes me feel tired.

In this political environment, it doesn’t matter  how experienced, knowledgeable, and capable you are–or what sex– the presidency will be a “kick-me” kind of  job. There has been so much rancor so far that, even if Republicans become a majority in Congress, they will be thwarted by “pay-back” among Democrats. And nothing would be worse than a Democrat in the the White House outnumbered by Republicans in the legislative branch of government.

Monica complains in her article that the feminists gave her no support back in 1998, evidence that women ourselves act out a certain kind of  misogyny. It clearly has not occurred to her that her current bid for attention, which could undermine a Hillary campaign, is an example.

However, Hillary has an ace in the  hole in her impending role as grandmother. Just imagine: A beautiful little unmarred being coming into the world who knows nothing of the tawdry story; the endless flow of toxic commentary; or Hillary’s own moments of humiliation, defeat, and crushing fatigue in spite of all the honors.

I kind of  hope that, for her own sake, she will put grandmother time first. And Monica still has time to create a family of her own. One would like to see them both happy.