With its ears close to the ground, the mouse speaks of oracular gifts. “It will teach us a kind of psychic street smarts, instill a scrappy determination to survive, and, ultimately, reveal itself as the deity in disguise.”

The Book of Symbols

Since I have been asked, I will provide the final chapter of the mouse drama. It turned out to be a much, much bigger story than I could ever have imagined.

Monday morning I got up and went about my business feeling that all was well. No sign of a mouse dropping anywhere; not one of the “one last chance” traps touched. Concern about the wounded mouse was still with me, but I had to let it go.

Then at some point during the afternoon, I walked past a spare bedroom, and there sitting right in the middle of the carpet was an adult, gray mouse. Since mice are nocturnal, the sight was startling. I found a little hand towel and dropped it on the creature, hoping to capture it that way. It bolted, however, and I had to corral it in the nearby bathroom.

As I walked to the front door with it in my hand, I could tell that it was not well. Its snout seemed to be damp as though it had been licked many times, but there was no injury that I could see. It nibbled weakly on a finger as I walked, but when I set it down in the sunlight it scampered to freedom. 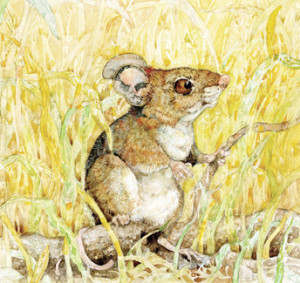 I have to say that I was a little shaken. I was so glad to have complete closure, so glad to have set the mouse free. Freedom is a big deal for me. These large feelings resolved into gratitude toward the mouse itself, as though it had surrendered in deference to my caring. Practically speaking, however, it may have just had enough, have arrived at that “Get me out of here!” moment no matter how things would go.

As I walked indoors, though, I examined my finger and saw that a tiny tooth had, indeed penetrated. No blood or anything, just the shiny sight of lower tissue. And then I could hear alarmed voices: “Hantavirus? Infection? Rabies?” Was the mouse’s tiny mouth foaming? Do mice get rabies? Sometimes I wish I had less imagination.

I have home medical supplies, so I didn’t go to the Urgent Care Center, but I did turn to a book from The Archive for Research in Archetypal Symbolism. I understood that through the tiny bite I had experienced an initiation of sorts, and I needed to understand the significance.

In folklore and contemporary culture, mice are often portrayed as heroes and helpers. (See Aesop’s Fable about the mouse that saved a lion.) The narrative in the book also describes them as “diminutive magicians,” appearing and disappearing, “perpetual stowaways on our voyage through history and our passages to brave new worlds.”

The text goes on to describe their virtues: sociability, curiosity, agility, and an acute sense of smell and taste. They can adapt to almost any climate and are resourceful and prolific, persisting “by sheer numbers against the onslaught of their raptorial, mammalian, and reptilian predators and the relentless persecutions of humankind.”

Ah, now the mice were taking on heroic proportions, and, in fact, I detected a certain nobility in the one that had surrendered to fate. But there is more–the mouse as emissary from the subconscious: “They slip through the cracks of our physical and psychic terrain, privy to our closeted and cupboarded secrets.”

I knew this was big. I had received a visitation and an initiation, and I was sure the outcome would be good. The narrative suggested that the visitation had come in a time of need: In their in tiny, busy, skillful ways, “mice are suggestive of the small, invisible, intricate workings of the unconscious to overcome obstacles, even without our conscious participation.” Hmm. I wonder what those obstacles are.

Nevertheless I realized that larger potential was now resident in my psyche, and it was only by descending into this labyrinth of emotional and moral confusion that I have been blessed by new insight. As the going gets rough–the symbolism suggestion that it will–I shall remember the virtues of mouse and try to emulate.

Anyway, what a great experience. I really do have complete closure, but I have been reminded of something I had already learned. When one of these wild creatures appears under unusual circumstances, there is a teaching afoot. They all have instructive characteristics and are associated with symbolism that is meaningful to a natural world that is time and again revealed as animated and communicating.

Surely this has happened for a specific reason, yet to be revealed. I will, of course, share anything of note.