“As a woman I have no country. As a woman, my country is the whole world.”

I’m still on the subject of the feminine; and, boy, has this post been a bitch to write–pardon the expression. This is my fourth draft, and after each previous version, some form of news came in that made the work seem dated, out of touch. However, I am determined.

I had originally set out in a positive frame of mind after going surly upon reading The Creation of Patriarchy by Gerda Lerner. I had eventually realized that you can’t judge the ways of the past by 21st century consciousness. The present is much better for the feminine, and consciousness will continue to evolve.

However, this is a bit tricky. One assumes that to evolve is to improve. However, according to Webster’s Dictionary, to evolve is “to develop gradually by a process of change.” That seems outcome-neutral to me, and every day in the news there is evidence of slippage afoot in civilization. We clearly need to commit to the development of higher consciousness, and who better to help with this than the emancipated feminine?

I had written earlier about the way American women have begun to outstrip men in education, and professional opportunities are rising. In addition, with access to birth control, women have the opportunity to devote a larger measure of their lives and minds to other than domestic responsibilities. Further evidence of feminine potential has recently been announced through the largest brain study of its kind.

Psychologist Stuart Ritchie, a postdoctoral fellow at the University of Edinburgh who led the study, found that, although different strengths were measured and the male brain is 10% larger, no major sex-related difference was detected between men’s and women’s IQs. Further, the study confirmed that women have significantly thicker cerebral cortices than men. This area is known to relate to sensory awareness, language skills, processing information, and consciousness.

My imagination took off. At a time of need, feminine intellect stands ready to serve. I have a vivid image of the potential in my own home. In my living room bookcase sits a five-foot-long collection of The Great Books, which my father bought for us as children. These are said to encompass “the finest creations of the Western mind.” Among the names from Homer to Sigmund Freud on the 53 volumes, there is not one female author. With the feminine intellect fully mobilized, what wisdom and creativity could be added to that treasure? To what higher plane could human consciousness rise? 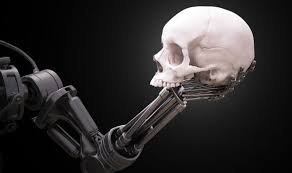 Unfortunately my excitement ebbed in the face of reality. Forget the looming threats of climate change and war, how much longer are humans of either sex going to have much of a brain to work with? After all, it does devolve with lack of use, and we’re all becoming steadily more dependent on technology to think for us. And, as scientists like Stephen Hawking have warned, there is the possibility that artificial intelligence could take over and “spell the end of the human race.”

Bummer. The feminine’s ascendance may be coming too late to help effect a transformation in human consciousness. But wait. If technology is the greatest danger of all to positive evolution, America is the primary source of that threat, and maybe the feminine can do something about it.

Consider that the tech geniuses aren’t going to continue to create mind-destroying stuff for consumers if we stop buying it. And empowered by our role in consumerism, women can go a long way toward curbing the threats of innovation by refusing to buy the latest and greatest of the techie stuff for our increasingly afflicted children. Undermine the influence of the “Mad Men” serving Silicon Valley, and we may triumph in larger ways.

Oh, dear. Have I gone off the deep end? Whatever. The situation is urgent, and I’m posting this. I need to get on with my next topic in this genre.

One Response to “Mystique P.S.”