Mythology: A set of stories or beliefs about a particular person, institution, or situation, especially when exaggerated or fictitious

I’m back on the subject of litter, but I promise I will move on after this. If you start paying attention, it can become an obsession.

A couple of days after my last post, I set out to collect trash along a one-mile route of the main road leading into my development. As I walked the last two blocks home, my black plastic garbage bag was so full that I had to carry it in both arms. Along the way, I had picked up three crushed beer cans of a type I had never seen before. 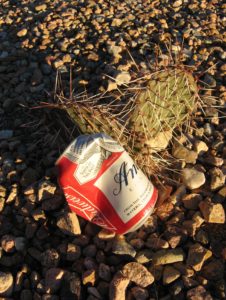 They were eye-catching: pretty red cans, commemorative perhaps, with the word “America” on the front in black script instead of the Budweiser brand. Other labeling was in silver, very decorative, with phrases from the National Anthem, the Great Seal, the Pledge of Allegiance, and finally the beloved folk song, “This Land Is Your Land,” by Woody Guthrie.

The sayings on the can represent beliefs about America that we all cherish; and as is the case with all myths, exaggeration and fiction protect us from the unsettling truth of things. Here are the sayings to illustrate:

“E Pluribus Unum” comes from the Great Seal.  It means “out of many, one.” America emerged out of many colonies and states but also out of peoples representing  an unprecedented number of different races, cultures, languages, and religions. Although diversity gifted our nation in countless ways, a lid is now being placed on the “melting pot” we became. We don’t want “us,” the idealized, white American of 1776, to be further corrupted by “them,” the resented immigrants of the moment.

“Land of the free” is a phrase from the National Anthem.  Here I want to insert just one small, but very telling point: Our incarceration rates are the highest in the world relative to other stable, industrialized nations, even though our crime rates are comparable.

“Home of the brave” also comes from the National Anthem. The United States is the most heavily armed nation in the world. The next ranking nation is Serbia with about a third as many guns per 100 people. Is that evidence of bravery or of fear? Or is it evidence of how lucrative capitalists have found the promotion of paranoia?

“Indivisible” is a word that comes from the Pledge of Allegiance. It is accurate, technically speaking, but remember the Civil War, the Viet Nam War, and the Civil Rights Movement when the nation was deeply divided? How about the intense polarization of the moment? A line from poetry by William Butler Yeats comes to mind:  “Things fall apart, the centre cannot hold . . .”  Let us hope that will not prove true here.

“Liberty and Justice for All” is our National Motto. However, two points come to mind: By law, US citizens suspected of terrorism here may be imprisoned indefinitely without trial. On another front, the way the country confines illegal immigrants violates constitutional guarantees and is often a harsh abuse of human rights.

Now finally, let’s address the language at the base of the patriotic beer can from “This Land Is Your Land”: “From the Redwood Forest to the Gulf stream waters, this land was made for you and me.” Can it actually be that America was made, not for the people who had been here for about 13,000 years but for those of immigrant European stock who would steal and plunder and trash lands held sacred by the indigenous?

The beer cans are now in the garbage where they belong, but I am glad that they inspired this post. I think the American mythology they commemorate is lovely, representing ideals we need to continue to cherish. However, much work needs to be done to align truth more closely with mythology, and maybe most of it needs to be done at the grassroots level–each of us walking the lanes of our national story to clean up the garbage and improve the view.

By the way, one of my readers shared the establishment of an organization dedicated to gathering data to catalyze a new approach to the national litter problem. You can check it out at www.litternation.org.

4 Responses to “Mythology on a Beer Can”