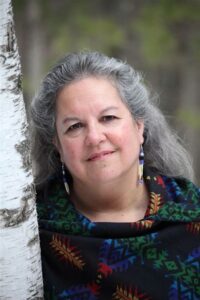 This is the third time I have written about Robin Wall Kimmerer’s book Braiding Sweetgrass, which, after being published in 2013 has soared to fourth place on The New York Times list of nonfiction paperbacks. To review her background, Robin is a member of the Citizen Potawatomi Nation and a Distinguished Teaching Professor of Environmental Biology for the State University of New York.

Published by the nonprofit Milkweed Editions, the success of Braiding Sweetgrass is described by CEO Daniel Slager as “singular,” “staggering,” and “profoundly gratifying.” Sales in the United States are approaching 500,000, and the book will now appear in nine languages across Europe, Asia, and the Middle East. This is not due to aggressive promotion, says Joanna Demkiewicz, marketing director of Milkweed. Instead, it is the result of a “grassroots build, led by independent booksellers and individual readers who have felt so deeply changed by Robin’s work that they press it into the hands of their friends, family and community.”

So, what is the appeal?

THE NATURE OF TIMELINESS

Robin is also amazed by the recent rise in sales. “What is being revealed to me from readers,” she says, “is a really deep longing for connection with nature.” She did not anticipate that desire as she wrote all the essays collected here but worked with the “grammar of animacy,” she says. This means viewing nature “not as a resource but like an elder ‘relative.'” A natural being is not referred to as “it” but as kin, as are plants, mountains, and lakes. However, this collection of essays “braids” scientific knowledge and ecological knowledge in with indigenous relationships with the living natural world.

As she wrote these essays over decades of observation and contemplation, of course she had no idea that the pandemic was coming. It did create a special opportunity for her book, however. For one thing, people have been reading more during the lock down, perhaps due in part to “digital fatigue.” And although readers’ extraordinary response was not anticipated, Kimmerer believes that it has sprung from the need “for some light in a dark time.” Perhaps it also seeded the potential for more empathy with and compassion for the natural world, as illustrated by her quote below:

In spite of these important details, after learning about the book’s rise to bestseller status in 2020, I was inspired to review the most dramatic media stories from 2014 on to see if I could find a clue in news stories about why it would be rising in popularity even before the pandemic struck creating the dark time Kimmerer mentioned.

The main events that stood out from 2014 to 2020 were a series of deadly armed attacks by individuals. I’m sure readers will remember these. The deaths at the named locations are in parenthesis: a Charleston church (8), Las Vegas hotel (58), Parkland high school (17), El Paso store (20), Dayton bar (9), Virginia Beach municipal center (12), and a Santa Clarita school (1). Of course, in 2020, the pandemic took center stage. There was only one attack at a Milwaukee Brewery where 8 were killed that received major attention. I assumed that people were now behaving better.

For all those years–from 2014 and including 2020–the total of deaths from guns is 106,501. That compares with the 125 that got major media attention. Bad news sells for the media, but even the special attention accorded a mass killing avoids the fact that there are killings going on in our country every single day.

I wondered how this compares with violence in other countries, and I found a site that could provide that information. It is called The Trace. I checked on their merit  with https://mediabiasfactcheck.com and was encouraged. It reported that The Trace sought information from scientific sources like the CDC. ” In general,” it said, their reporters “are factual and lean left in bias.”

So here are some details I discovered that originated in the archives of 2018:

I realize that this final perspective is a “dizzying” departure from the one with which I began. The information on the stunning success of Robin Wall Kimmerer’s book has not been publicized by the media as an important news item. This development, largely sub rosa, is, I think we would all agree, wonderful news. It is an indication that an awakening is afoot that could change the way we think about the world in which we live. And Kimmerer believes, as I wrote in the introduction, that when we change the way we think, “we suddenly change how we act and how those around us act, and that’s how the world changes. It’s by changing hearts and changing minds. And it’s contagious.”

With regard to the information on the United States’ international standing in gun violence, the height of  our international ascendance in deaths is also largely sub rosa. Although the media benefit from the attention garnered by a spotlight on certain horrifying events, they are not publicizing the pandemic of violence in our own country and its likely endurance due to recent unprecedented gun sales. The problem is horrific, but as Kimmerer said, when we change the way we think “we suddenly change how we act and that’s how the world changes.” The lifting of hearts and minds would be a new form of contagion.

Perhaps it’s time for us to follow the Potawatomi scientist’s lead.

One Response to “Needed: A New Kind of Contagion”